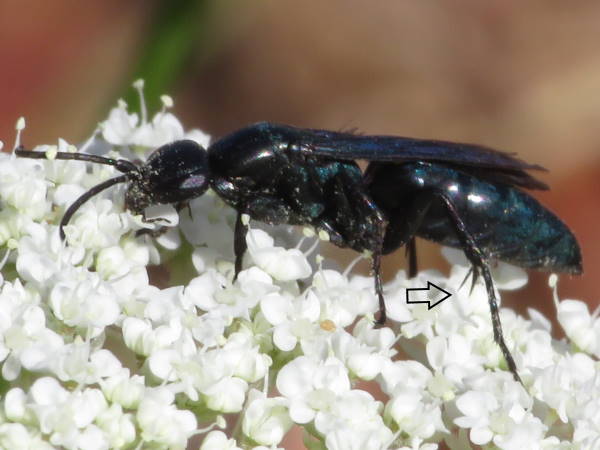 Spider wasps, a diverse family (about 300 species) belong to a larger superfamily (Pompiloidea) that includes four families. Best known are the highly diverse velvet ants (close to 500 species. The other two families, Club-horned Wasps (Sapygidae) and Myrmosid Wasps (Myrmosidae) are relatively small with less than twenty species per family.

Knowing that species in the different families look and behave differently today, one might wonder what traits bring them together in a superfamily. One answer might be that evolutionary biologists link these groups based on the theory that they were originally one large group of wasps with similar genes and a few microscopic physical similarities. From that starting point, they evolved over time to families with different physical and behavioral characteristics.

This introduction provides some basic identification tips for both the spider wasps and the velvet ants. It begins with a brief general introduction.

Recent spider wasp research reconsiders the timing of the emergence of the superfamily split into distinct wasp families based on reviewing some spider wasp species captured in amber. Based on morphological examination, the authors concluded that one of the amber specimens was not a spider wasp, and it was placed it in a different wasp family. TResearcher did agree that the Pompiloidea off into their separate families over time, each with their own larval prey sources.

The closest relatives of Pompilidae, Mutillidae, and Sapygidae, are predatoids of solitary wasp and bee larvae, and occasionally other insects

Why did spider wasps evolve as the spider specialists? The authors hypothesize that, in evolutionary terms, a sufficient quantity of spider prey became available.

Nevertheless, it is possible to suggest that spiders constituted a ubiquitous, diverse, and abundant source of prey after pompilids split from their sister group in the Late Cretaceous.

Source: Eocene and not Cretaceous Origin of Spider Wasps: Fossil Evidence from Amber

Two more questions round out the introduction to spider wasps. First, Do all spider wasps hunt spiders?

Short answer: No. Some spider wasps are known as kleptoparasitoids, meaning they use the prey of other spider wasps as their larval hosts. Think of it as a very efficient reproduction strategy. These wasps do not have to expend energy hunting spiders and digging nests.

Short answer yes. Longer answer, with few exceptions such as the tarantulas hawks, there’s no need to fear them. The stings of the eusocial wasps such as yellowjackets, hornets and paper wasps are more problematic for humans.

The venoms of pompilids are notoriously painful and the genus Pepsis is one of the few taxa that has been rated as a four (out of four) on the Schmidt Sting Pain Index (a subjective ranking of the pain caused by various insect stings). However, this defensive use is not the primary evolutionary purpose of these venoms. Stereotypically, pompilids reproduce by stinging a spider to paralyze it and dragging it across the ground (or the water in some exceptional cases to a burrow where an egg is deposited on it before being sealed in; when the larva hatches it consumes the paralyzed spider before pupating and emerging from the burrow as an adult.

Wasps Spider wasp identification can be difficult or easy, depending on the identification purpose. The large number of species means that entomologists often need the use of microscopes to sort through multiple physical traits in order to determine identification at the species level. Fortunately some species exhibit specific large scale body patterns that make field identification or identification by pictures useful.

The identification goal in this introduction aims to provide some general physical facts to identify spider wasps in general. Please press the green Wasps button to learn more about other wasp families. For example, the picture at the top of the page shows a species in the Aporus genus. The arrow in the picture points to the extended spines on the bottom of the tibia. The body color and extended spines serve as good field and picture identification clues. 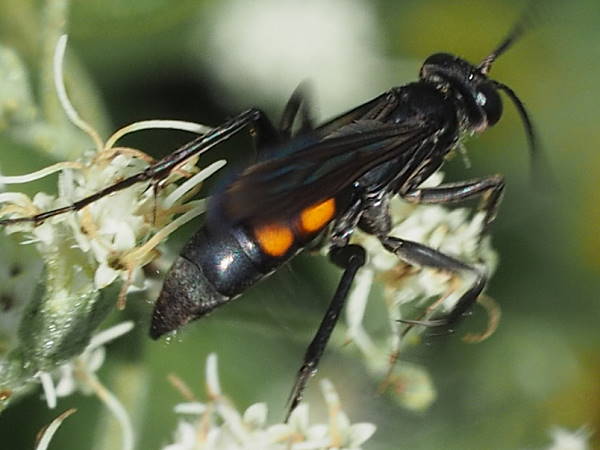 Spider wasp species in the genus Anoplius, better known as blue black spider wasps, are the largest genera of spider wasps in terms of species numbers. The picture shows one with orange abdominal spots, a very good field identification clue. 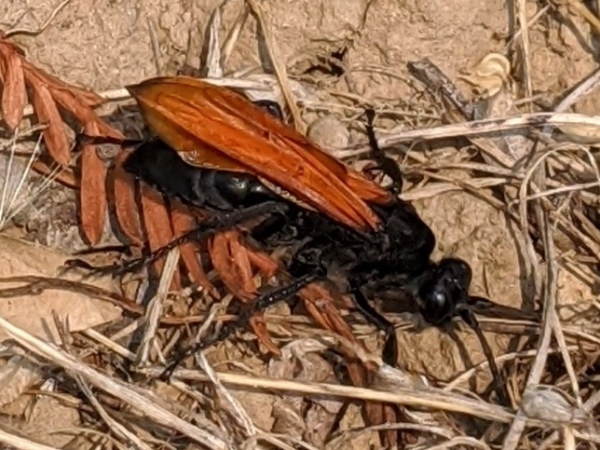 A large size, large prey and painful sting make the tarantula hawks stand out. The large, dark body with orange wings often serve as good initial field identification clues. They are found across the southern half of the United States, where ever their larval hosts, tarantulas, live. 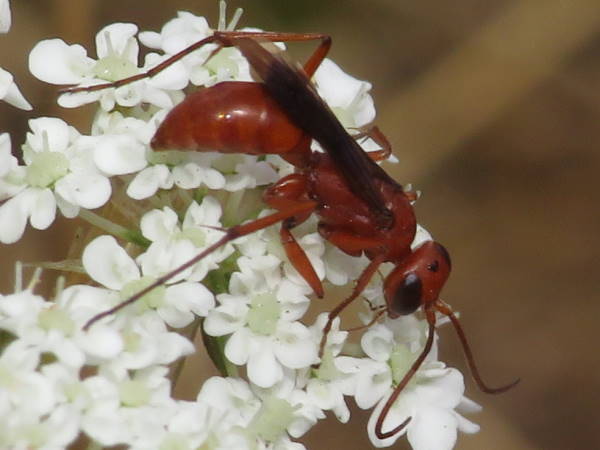 The red body and other visible physical characteristics such as the dark wings of the next wasp suggest it belongs to the Genus Ageniella. They are relatives to the larger and better known Tarantula hawks.

Rusty Spider Wasps (Tachypompilus ferrugineus) look similar. However they often have black abdominal stripes. They are fairly common in the east. 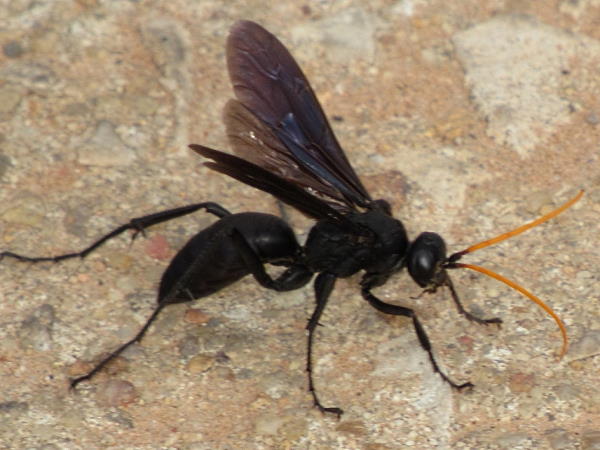 Eastern Tawny Horned spider wasps represent another relative of the tarantula hawks. The yellow antennae and black bodies serve as good identification clues. Unlike tarantula hawks, they hunt wolf spiders and others as their larval food. 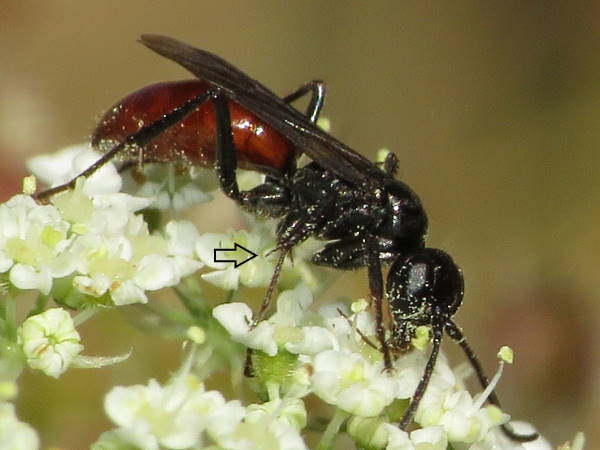 Diversity in the tarantula hawk subfamily runs fairly deep. Here’s the smaller Priocnemis oregona, a western species. The red and black body is similar to many different wasp species. 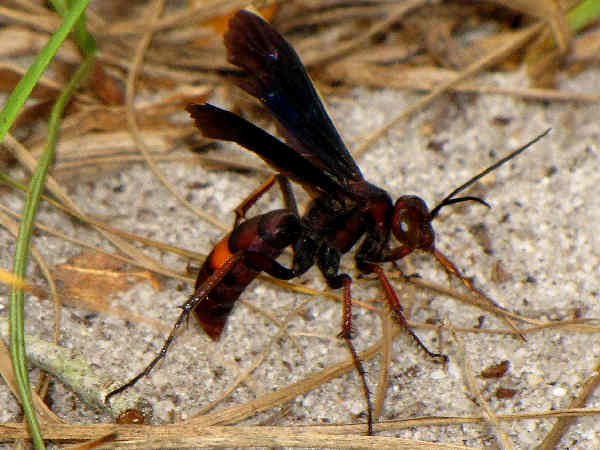 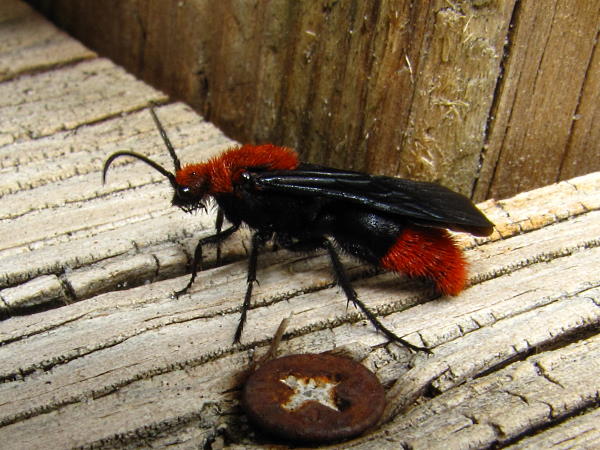 Velvet ants get their common name based on the wingless females and their body resemblance to ants. Furry bodies, however, do not translate them into warm and fuzzy wasps. Their evolutionary background follows the general pattern of the spider wasps and today while many of their physical characteristics look substantially different from spider wasps, they maintain some similar genetic and behavioral characteristics.

With the exception of experts, the large number of velvet ant species can make species identification difficult. Probably the most common and well known species is the Common Eastern Velvet Ant. The first picture shows the bright red, fuzzy, winged body of the male. They can grow up to one inch in length and the red body makes them easy to spot. 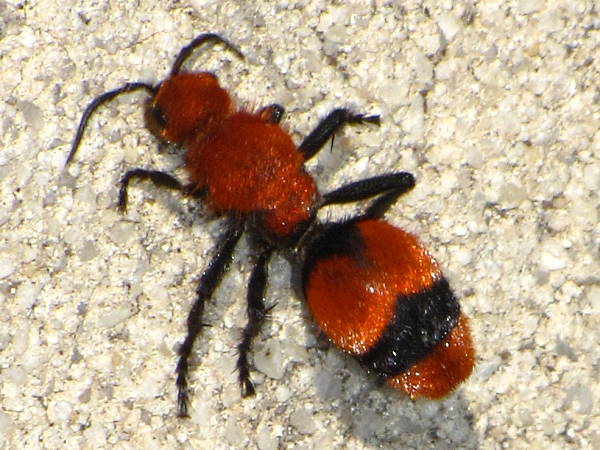 Females lack wings and are known to have a powerful sting and go by the nickname cow killers. Males do not sting. 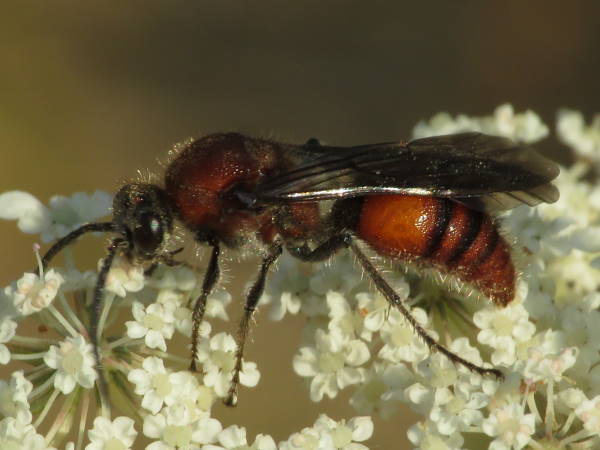 The next picture shows a male member of the Timmula genus. The dark abdominal stripes serve as a good field identification clue. Their range extends across the Untied States. Note that the body is a bit less fuzzy than the other species on the page. 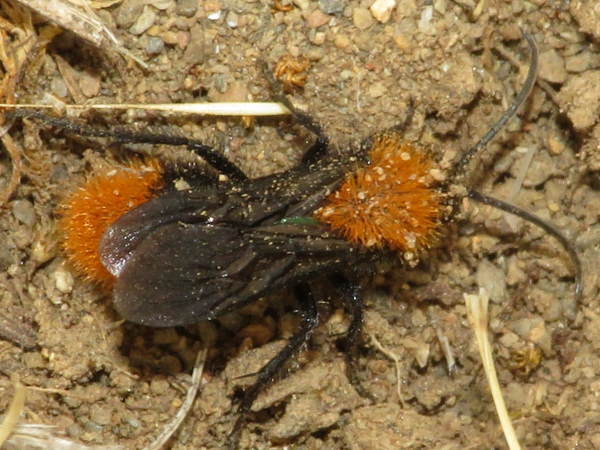 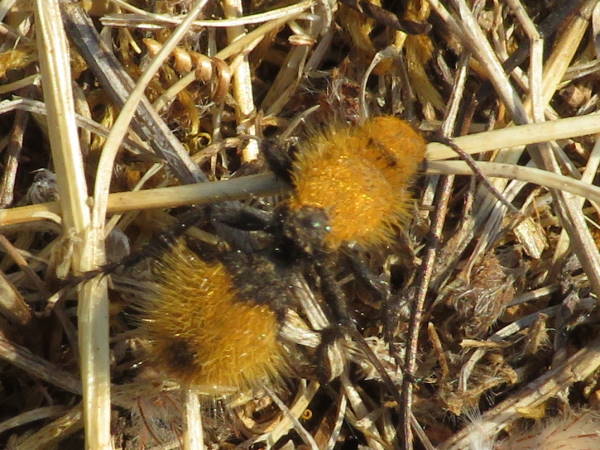 Here’s a similar looking female velvet ant seen nearby the male. They might be a variation of the Pacific Velvet Ant that often has a red fuzzy body like the Eastern Velvet Ant. More than a few of the many velvet ant species show a burnt orange, fuzzy body.