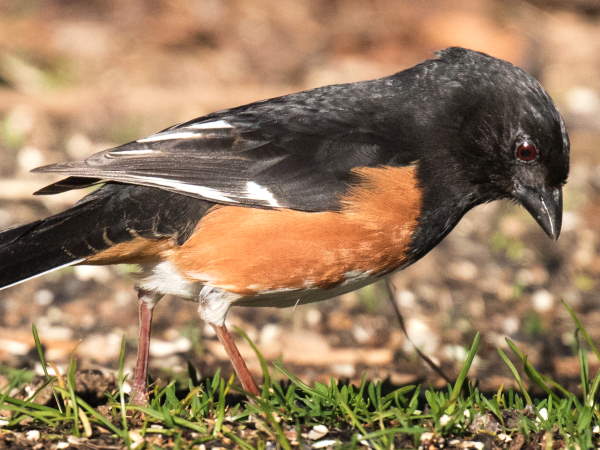 We see sparrows day in and day out on a year round basis. It might be equally true that their ubiquity makes them easy to overlook.

These small, brown feathered birds often make their homes everywhere people make their homes. Could it be the lack of appreciation paid to them derives from the fact they don’t offer the same type of bird pizazz as the larger and more colorful species that visit the back yard feeder?

In addition to being some of the best back yard feeder friends one could possibly ask for, sparrow diversity also weighs heavily on the sparrow appreciation scale. About three and one-half dozen species of New World sparrows call the United States home at some point in the year.

That’s a lot of sparrows. Learning about the most common species at any location represents my suggestion for increasing sparrow appreciation across the board.

From that starting point, organizing sparrow identification begin by whittling down the species according to their population density. For example, five of the sparrows

have a minimal presence in the United States, barely making it over the Southwest border, or in the case of Baird’s, occupying a small area along the Upper Midwest and Canadian border during breeding season.

Additionally, while six Towhee species are represented, only the three members of the Pipilo genus, the Eastern, Spotted and Green-tailed Towhees, have an extended range and are regular visitors to back yards from coast to coast. The top picture shows an Eastern Towhee with the typical Robin look alike red breast.

The California, Albert’s and Canyon Towhees have a limited California coastal or Southwest range.

That initial whittling down of sparrow species still leaves about two dozen species. A quick look at their range maps reveals that counting at least one of the Towhees, about ten types of sparrows are common across the United States during at least one part of the year, breeding, migration or year round.

The video shows one of the wide ranging species, a Dark-eyed Junco. The scratching on the ground is a scene played out on a daily basis from coast to coast.

In fact, most of the common back yard sparrow species prefer pecking for seeds that have been tossed along the ground. 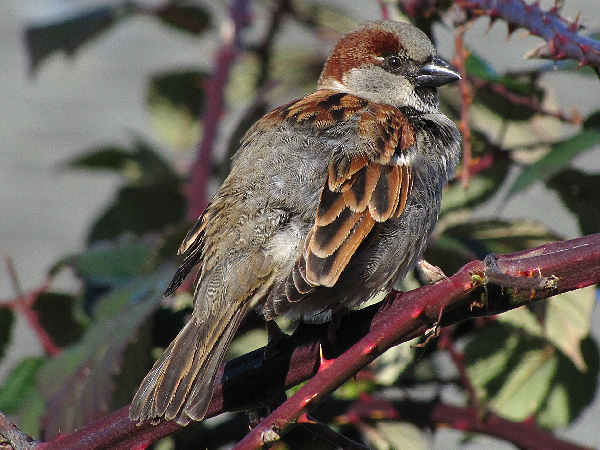 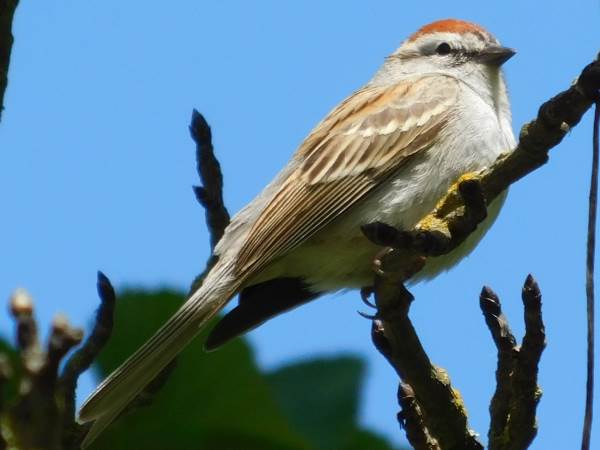 Chipping Sparrows live year round in many areas of the Southeast. They also breed in many grassy areas throughout the United States. Those conditions also match many suburban areas.

They tend to be smaller than average sparrows. The darker eyebrow serves as a good field identification clue. During breeding season, males also show a nice set of rusty feathers on the head. 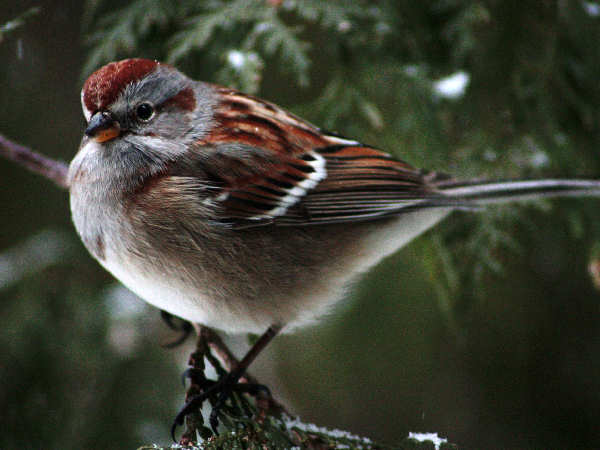 American Tree Sparrows, another wide ranging migratory species, breed in Northern Canada and winter in the Northern areas of the United States. They are primarily ground feeders that do take to feeders. 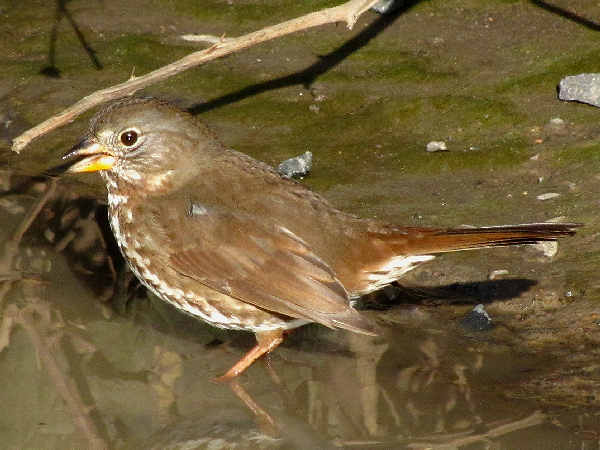 Fox Sparrows also fit into the migratory category. In the East they travel to Canada during the breeding season and return to residential areas during the winter. In the Pacific Northwest they can be year round residents. Additionally the Eastern Fox sparrows tend to have a more pronounced red hue to their feathers.

They prefer brushy habitat for ground cover and likewise tend to scratch along the ground for seeds under the feeders in residential neighborhoods. 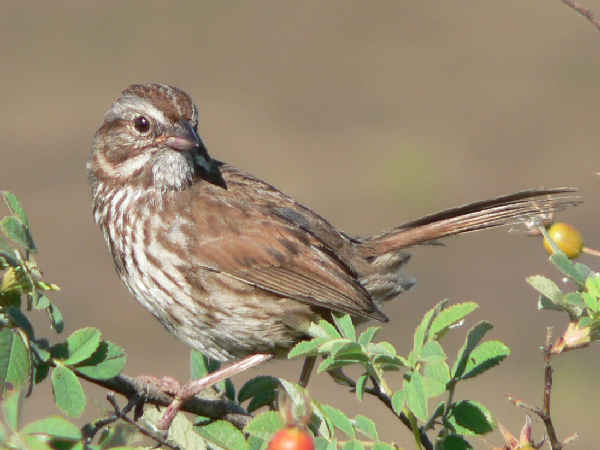 Nothing shy about the Song Sparrow. During breeding season they will sit perched and available for video recording in the yard while singing up a storm.

The breast is streaky looking in all of its various forms across the United States. 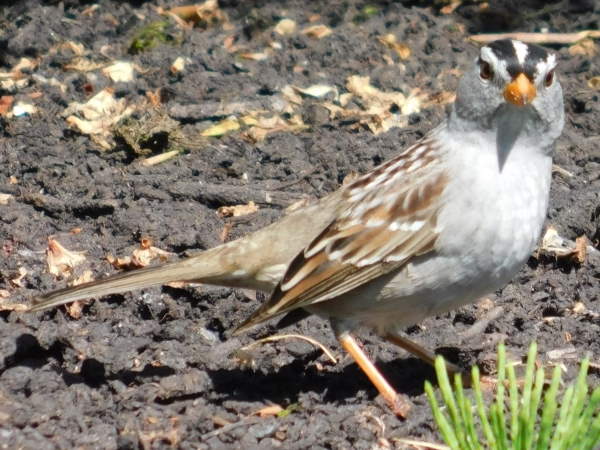 White-crowned Sparrows also breed in Northern Canada and spend their winters in most areas of the United States. The distinct white feathers on the head make for easy identification. 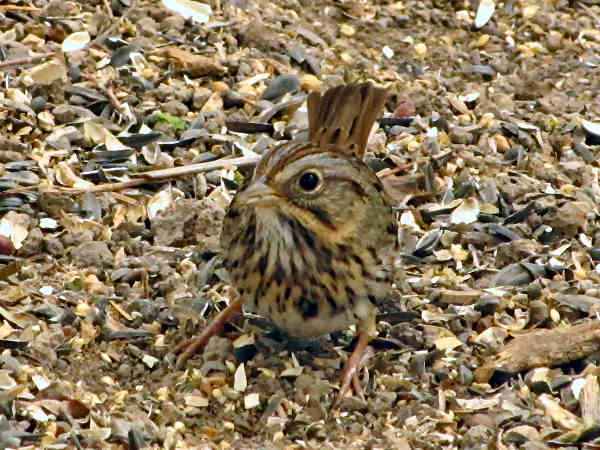 First off, Lincoln’s Sparrow winters along the Southern border and breed mostly in Canada and the Rocky Mountain region. Fields and wetlands tend to be their primary migratory habitat. 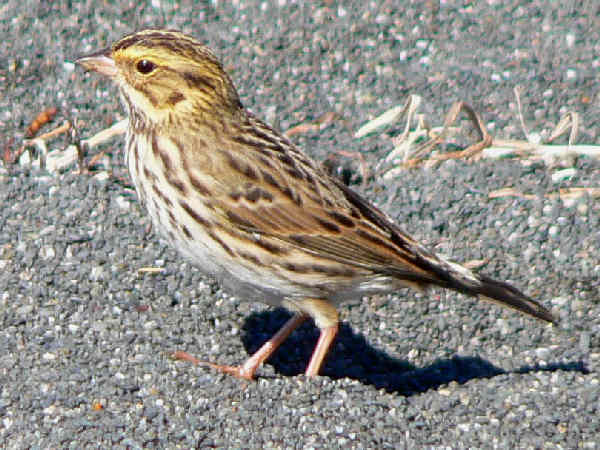 A yellow eyebrow or spot of feathers around the eye is a great field identification clue. 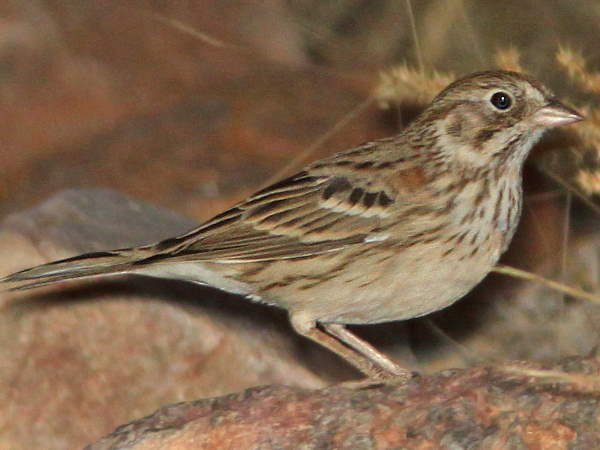 Vesper Sparrows prefer grasslands and open areas. Year round resident in much of the South, the remaining population breeds in the North although not heavily in Northeast and New England.

The picture highlights the thin, white eye ring and a small rusty patch at the top of the wing. 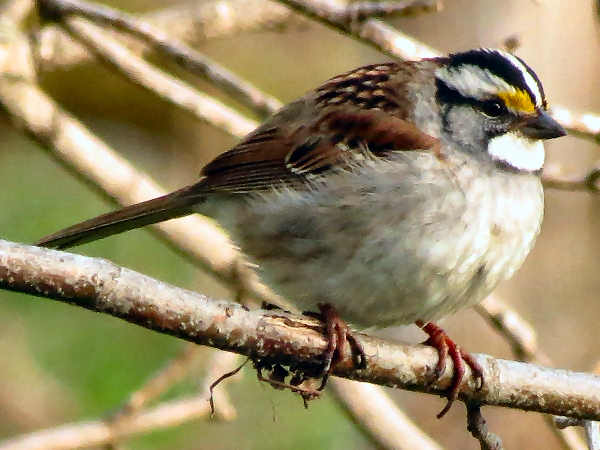 Add in the sparrow species with a more regional range and almost all places in the continental United States have one dozen or so sparrows that live year round or visit the area for migration or breeding.

The first picture in this section shows the White-throated sparrow. The white throat feathers and yellow eye-patch make for easy identification. These sparrows live primarily in the Midwest and East. 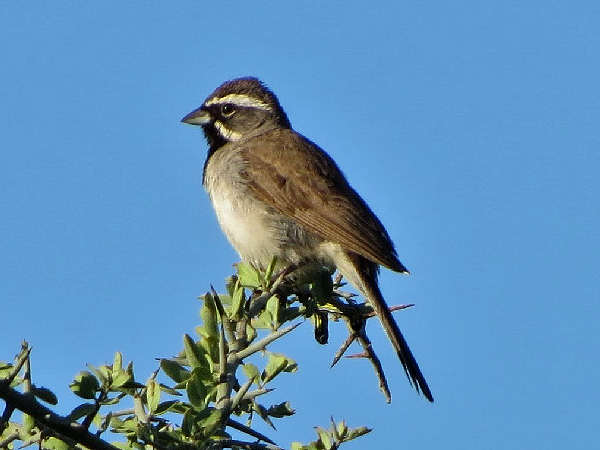 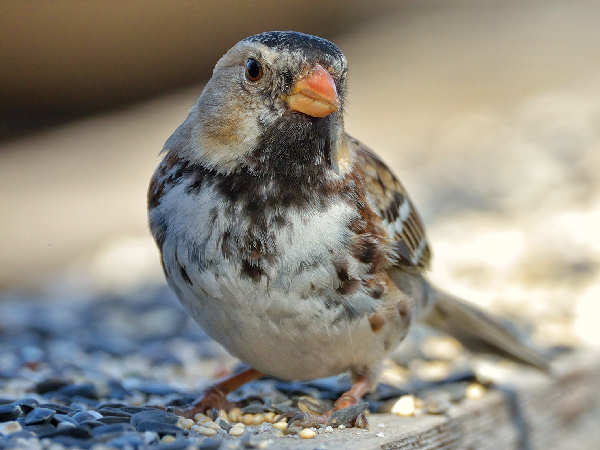 Black throat feathers that extend well down the breast is a defining feature of the Harris’s Sparrow. They are the largest native sparrow species and winter in the Midwest. 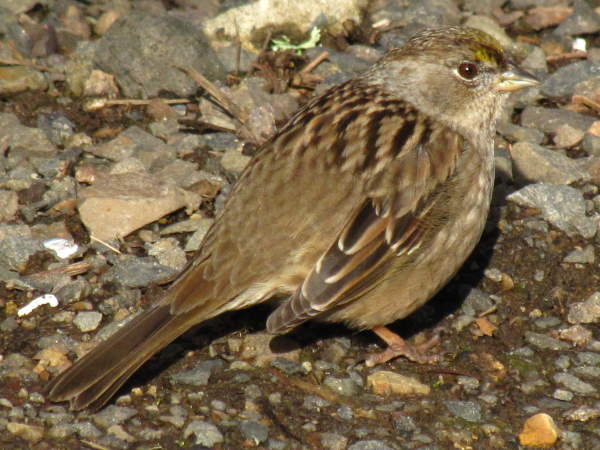 The yellow head feathers also make for easy identification of the Golden-crowned sparrow, a West Coast species that breeds in Alaska.