The family known as Scoliid Wasps (Scoliidae ) contains only twenty species, divided into seven genera. Their life cycle lasts about a year. Adults fly during the summer season nectaring on flowers during the early parts of the day and flying low over grass or literally crawling over the grass and soil in search of grub worms from scarab beetles. Once found they paralyze the grubs and deposit their eggs. Research has also shown that some grub worms are easier to find around sandy soils after a period of rain because the grubs briefly emerge from the soil. That partially explains the larger number of species found in Florida and the Southwest, an abundant larval food source with the least amount of energy expended.

Less known is the fact that one of the species, Pygodasis ephippium, shown in the video clip at the top of the page, ranks among the largest wasps found in the United States. Growing up to two inches in length, there’s no missing it when it nectars in the gardens of South Texas. Cicada Killers, that can grow to about one and one-half inches in length often get credit for being the largest wasps in the United States. The newly arrived Giant Hornet, aka Murder Hornet, can also grow up to two inches in length.

Like other Scoliid wasps, Pygodasis ephippium is non-aggressive and only out looking for beetle grubs in the yard to implant its eggs. Still, it’s not a good idea to try to grab it because like all Scoliid wasps, they will sting to defend themselves in extreme circumstances. Letting all Scoliid wasps do their thing uninterrupted also allows this beneficial insect to keep the lawn relatively free of harmful beetle grubs. 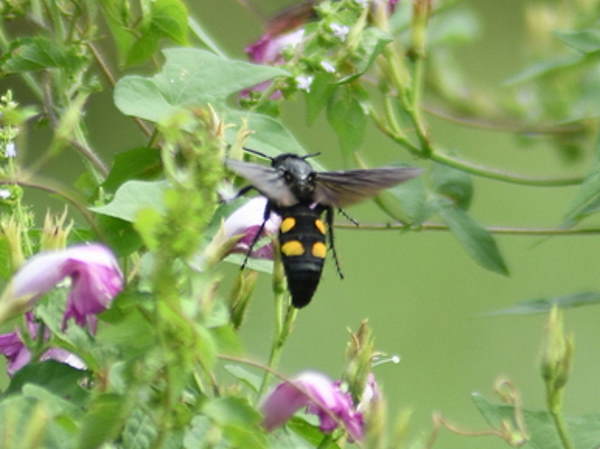 One additional species, the Four-spotted Scoliid (Pygodasis quadrimaculata) is more common in the Southeast coastal states. The common name, Four-spotted, refers to females four yellow abdominal spots. Males have a variable color and can be misidentified with the Nobel Scoliid. Pygodasis have black legs. Nobel Scoliids have red legs.

The following review of some of the native Scoliid species covers a subset of the scoliid species across all seven genera. Please press the wasps button to learn more about other types of wasps. 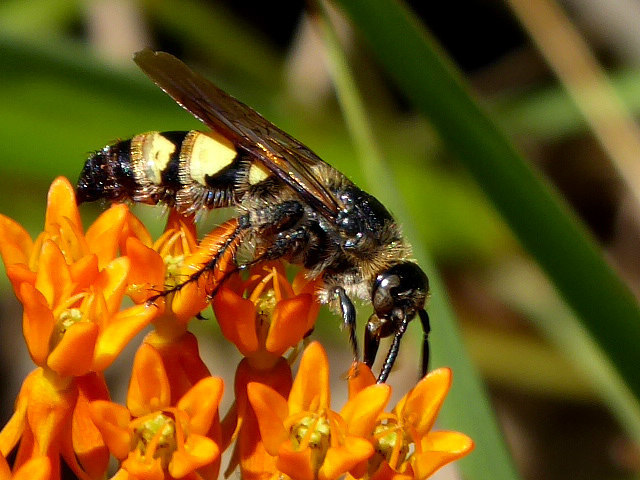 Most Scoliids are regionally distributed, with the bulk found in the Southwest and Florida. For example, only four of the species can be labeled as widespread, found in most areas east of the Rocky Mountains. First up is the Feather-legged scollid (Dielis plumipes), 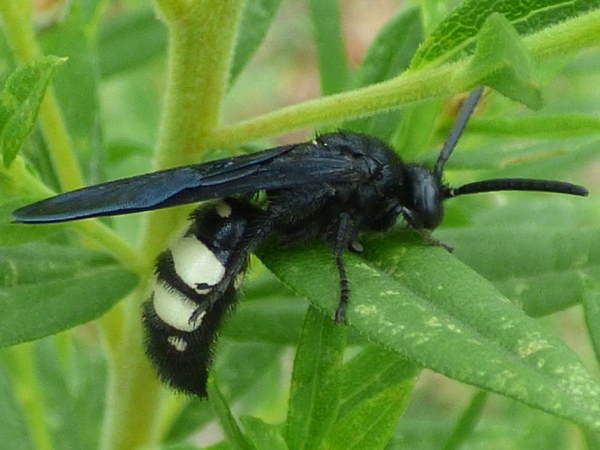 The Double-banded Scoliid (Scolia bicincta) can easily be identified by the two white spots against an otherwise black body. 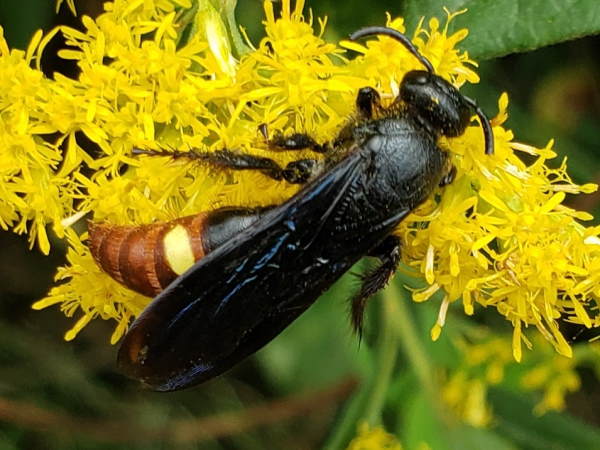 The Blue-winged Scoliid (Scolia dubia), one of the most common of the Scollid species, easily gets identified by the yellow spots against a hairy red abdomen. 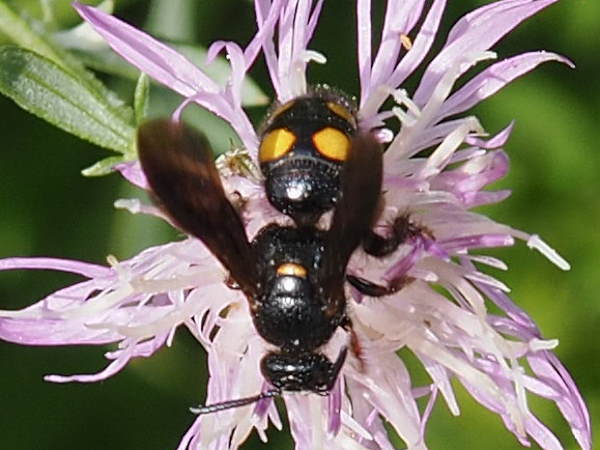 Red legs and orange to yellow spots on the abdomen are good field identification clues for the Nobel Scoliid (Scolia nobilitata). 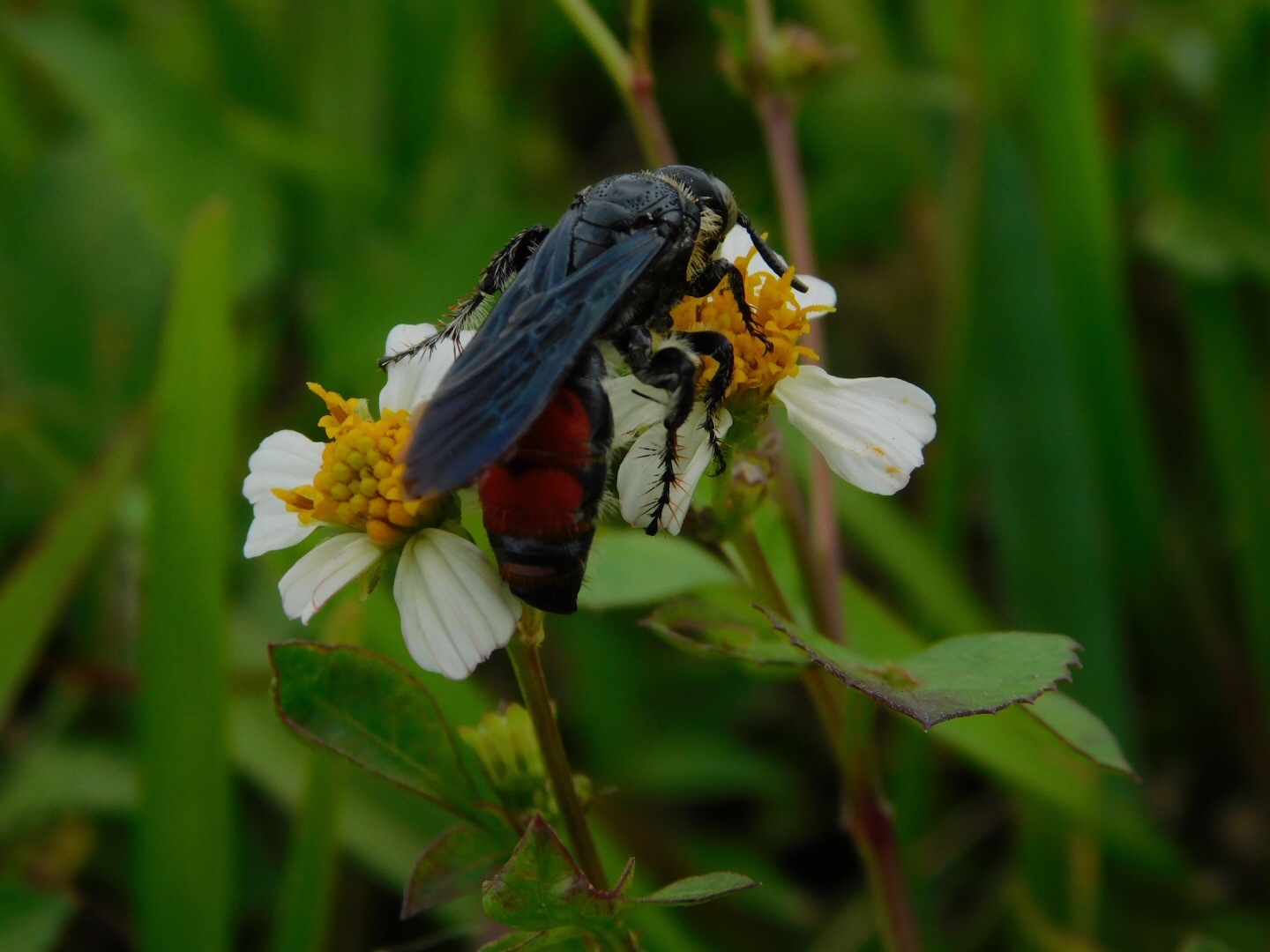 Four additional Dielis species are also regionally distributed. Three of them follow with pictures. First up is the Caribbean Scoliid Wasp (Dielis dorsata) , a Florida resident with orange bands on the abdomen. 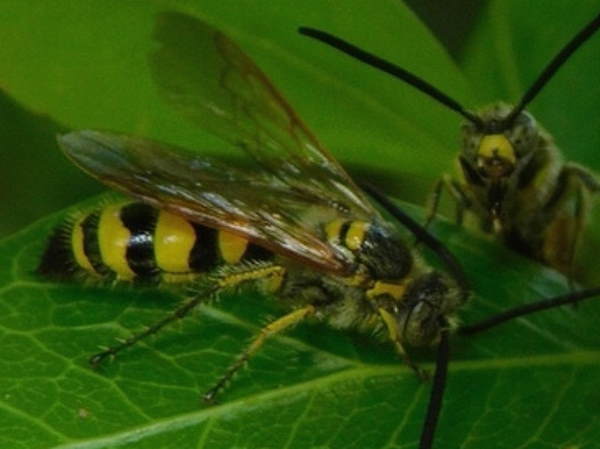 Here’s the Three-banded Scoliid (Dielis trifasciata). Actually, the male has four bands on the abdomen. 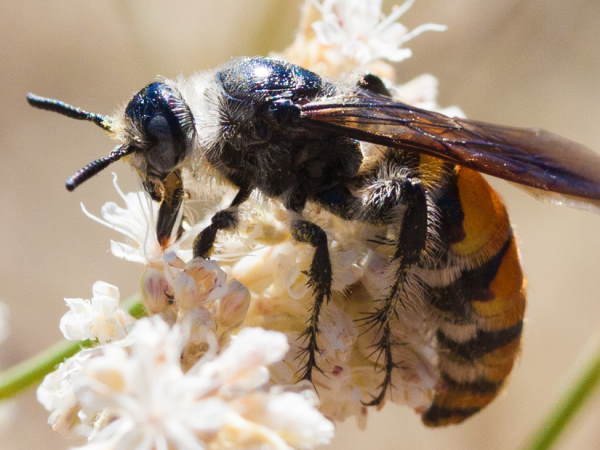 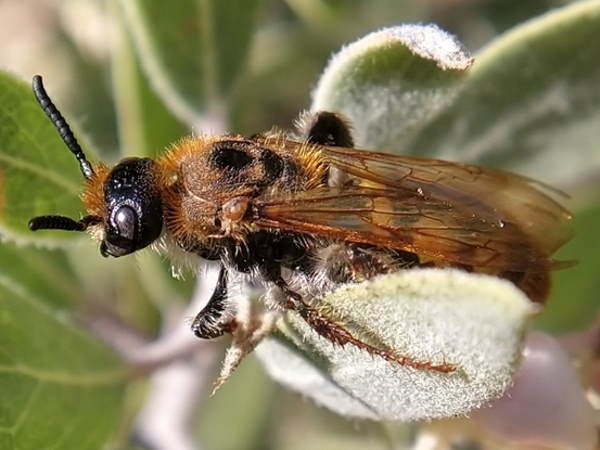 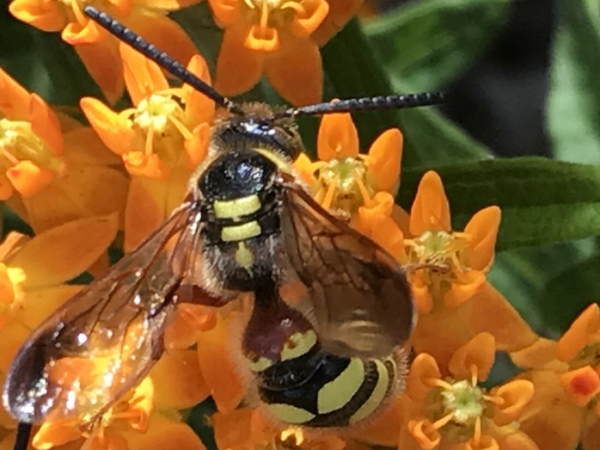 The Eight-spotted Scoliid wasp (Colpa octomaculata) is the most wide ranging of the two Colpa species. The picture shows a male. Females have red hairs on the body and legs. Look for them across the Southwest, the lower Midwest and Southeast. Generally their coloration is variable with western specimens observed as having more red vs. black on the body.

Colpa pollenifera , the less common of the two can be found in some Southwest and lower Midwest areas. 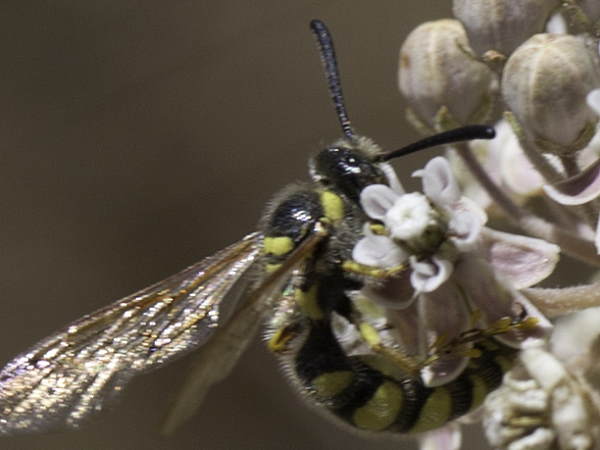 Out West, the Crioscolia alcione , one of the few species without a common name, is the dominant species. The picture shows a male. Females have a more pronounced set of yellow spots on the abdomen. They have a variable appearance.

Crioscolia flammicoma is the less common Crioscolia species with a range of California and Arizona. 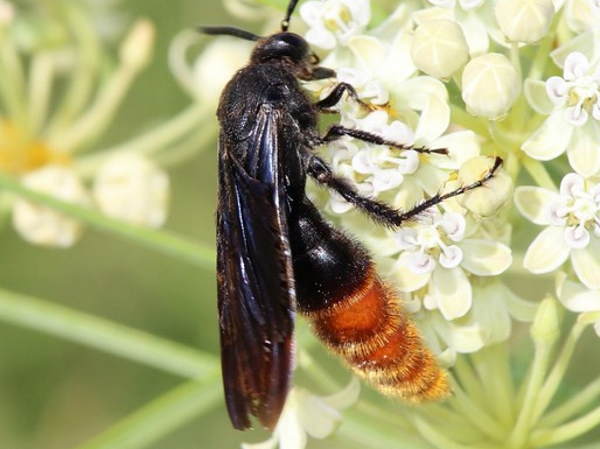 Finally, the Fire-tailed Scoliid Wasp (Triscolia ardens) is the sole member of the genera in the United States. The hairy red abdomen set against the otherwise black body gives it a distinct look. The range extends from Texas west to California,