Sawflies, Horntails, and Wood Wasps also share the trait of having ovipositors. Unlike parasitic wasps, covered elsewhere in this guide, they deposit their eggs on the underside of leaves, and, with an exception, their larvae are vegetarians. The larvae can be seen on trees, bushes and other plants. While they partially resemble other other caterpillar looking insects, leg formation serves as a basic and initial ID guide.

While sawfly larvae are known for being vegetarians the video also shows that some adult sawflies do consume insects. Adults may resemble other hymenopterans, but lack the characteristic “wasp waist”. Females may have conspicuous ovipositors. In comparison, while their species numbers are fairly large, over one thousand species currently documented in the United States, they still trail the parasitic wasps species total of over ten thousand. 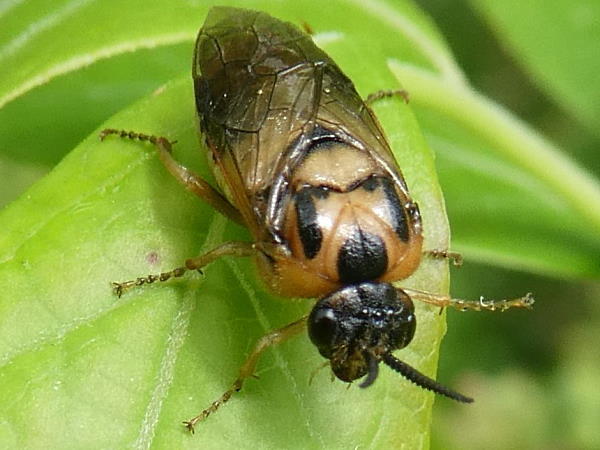 Second order ID help begins by documenting the host tree or plant for the larvae. Many species are tree or plant specific. For example, the Diprionidae family go by the common name, conifer sawflies, signifying their primary larval host. 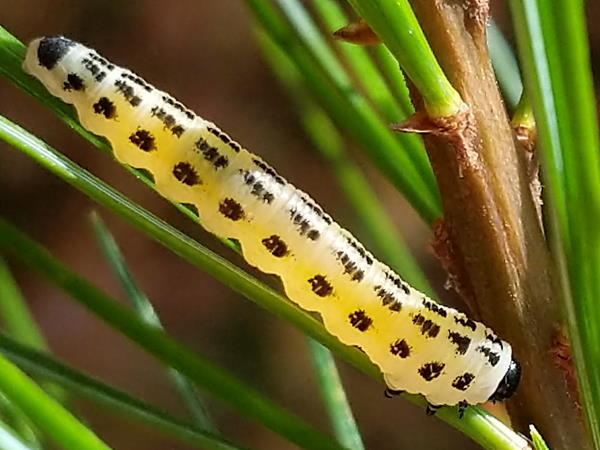 For example, here’s a picture of a White Pine Sawfly. a common forest pest of the Northeast. In large numbers they can defoliate their host of choice, White Pines. 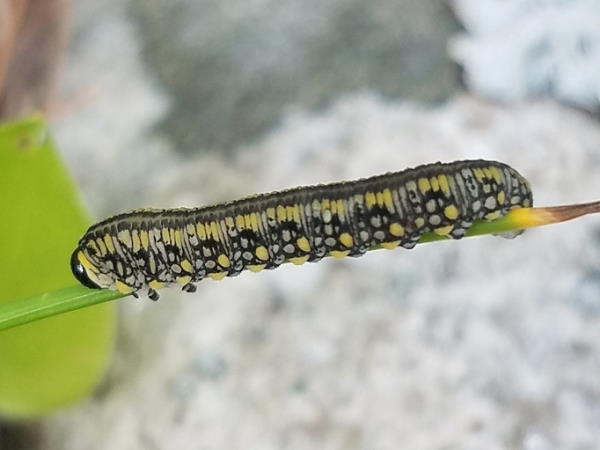 With around forty documented species, the conifer sawfly larvae do look different. Here’s the introduced Pine Sawfly, a European species that has spread through northern North American forests. 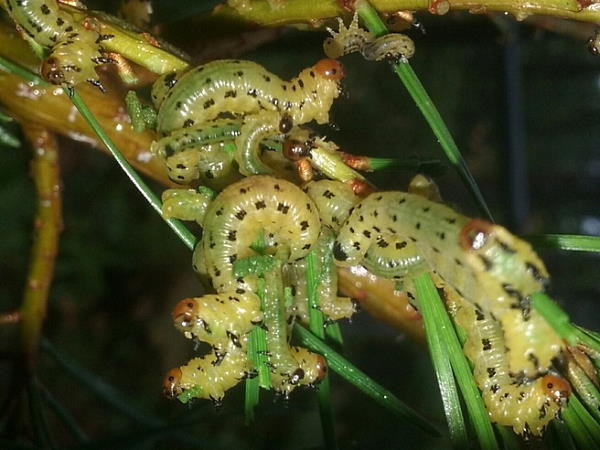 Finally, here’s a group of Red-headed Pine Sawflies, another pest of Eastern conifer forests. Both the adults and larvae have red faces or heads.

Wasps The video clip at the top of the page, probably shows a member of the Family Tenthredinidae better known as Common Sawflies. According to Bugguide over nine hundred species have been documented in the United States. They tend to be larger than average sized with colorful bodies. They represent about 85% of the superfamily species population. 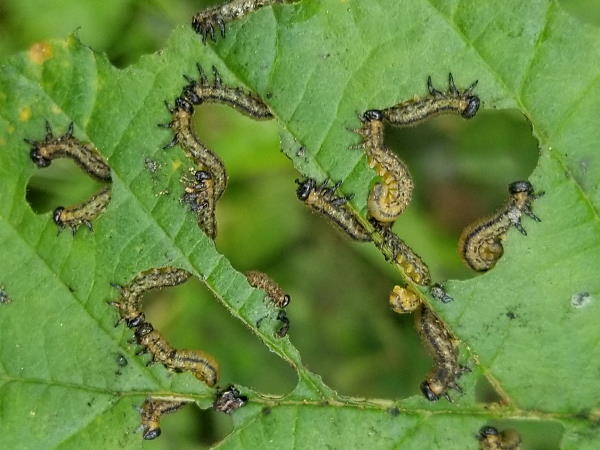 Striped Alder Sawflies algo fit in the common sawflies family. It’s a non-native species can be found in the northern half of the United States. Striped, yellow bodies are good clues for the larvae. The picture highlights the fact that a group of them can easily do damage to leaves. 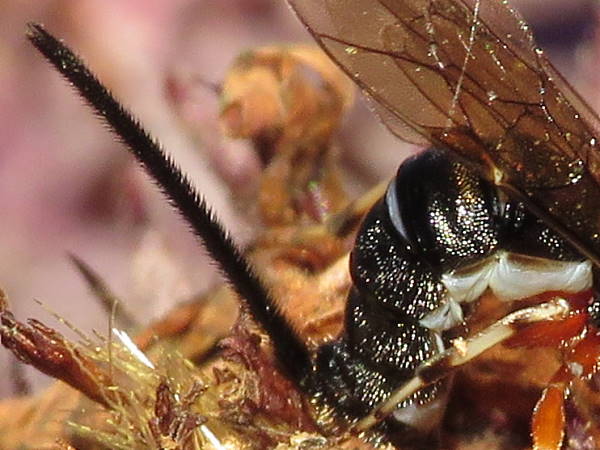 The question, ‘why are they called sawflies if they are in the wasp category’ sounds reasonable. Consider the above picture of a sawfly ovipositor. Many of the parasitic wasps have ovipositors, and therefore it’s reasonable to assume that a close inspection of the shape and size of the ovipositor might help with initial identification. A close up view of a Sawfly ovipositor shows a saw like appendage. 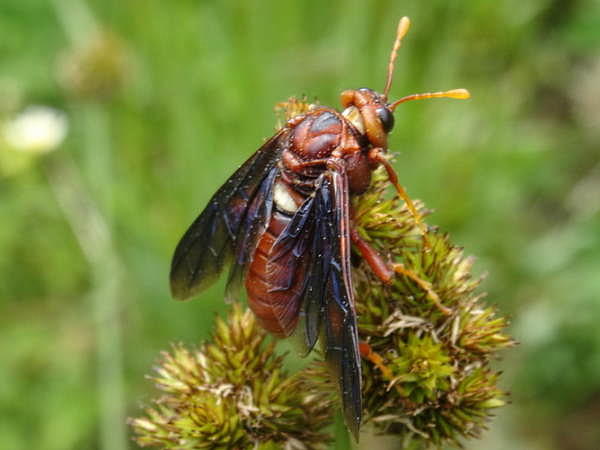 The largest sawflies, members of the Cimbicidae family can grow up to an inch in length. Size and clubbed antennae serve as great ID clues. The white spot at the top of a distinct rust colored body are good identification clues for the Rusty Willow Sawfly, a West Coast species. Males lack the spot. 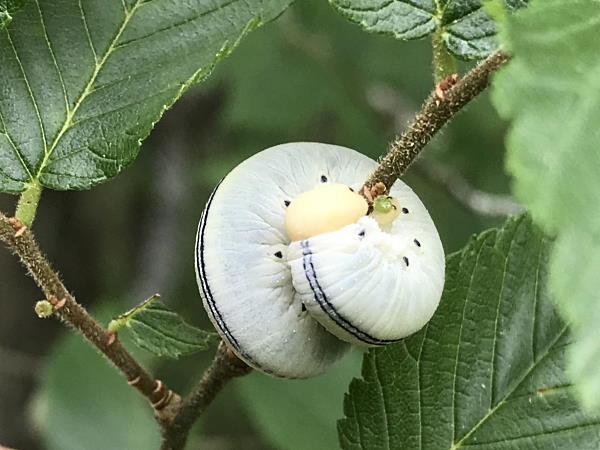 Here’s the larvae of the Elm Sawfly, the largest of the Cimbicids. They can grow up to two inches in length and the light body with dark stripe on the back are good identification clues. 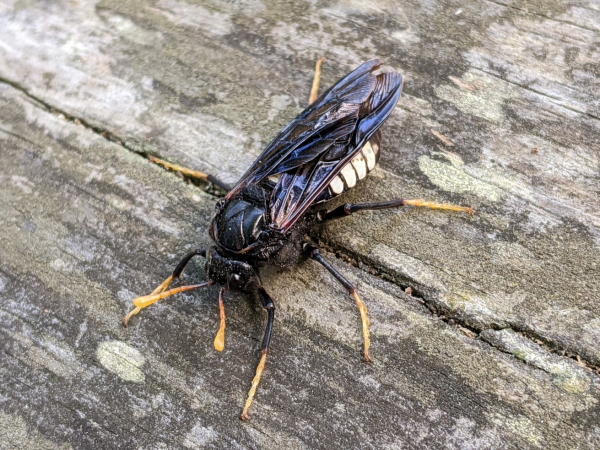 Here’s a female adult. The male adults lack the abdominal stripes. In some instances they can defoliate their trees of choice, mostly elms and Willows. Their range extends through most of the United States. where ever their host trees are found. 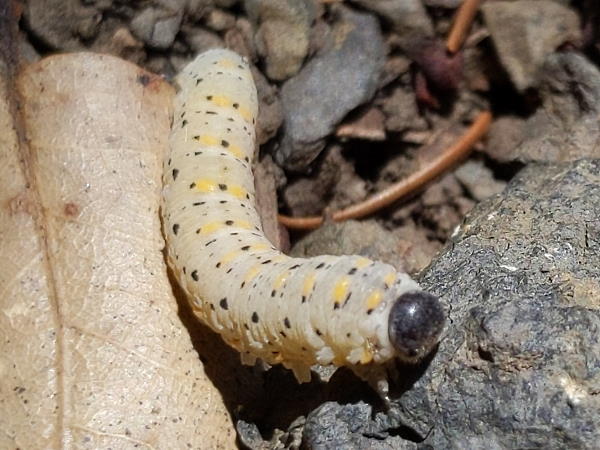 Members of the genus Abia are often called Honeysuckle sawflies because of the larval hosts. The yellow dashes along the back of the body serve as good field ID clues. 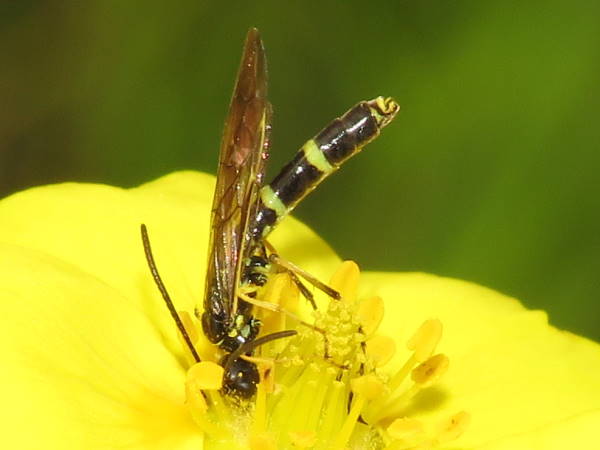 While all sawflies do not exactly resemble flies, here’s a picture of a Stem sawfly. Most of the species have narrow abdomens with yellow coloration, similar to some of the syrphid flies. 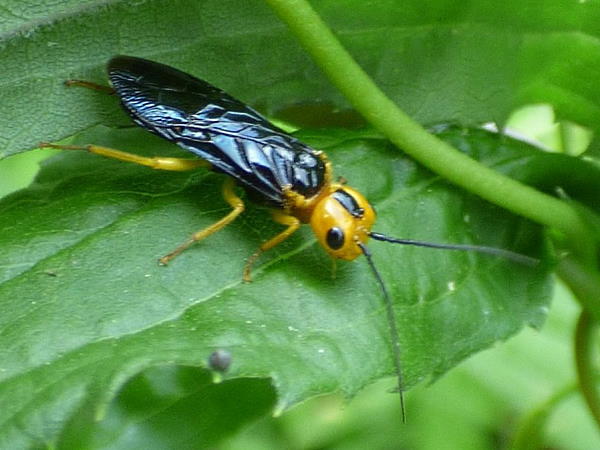 Web-spinning and leaf-rolling sawflies share something in common with the better known tent caterpillars. They spin webs to protect themselves during their developmental stage. The bright yellow color of this Oncholyda species makes for fairly easy identification. 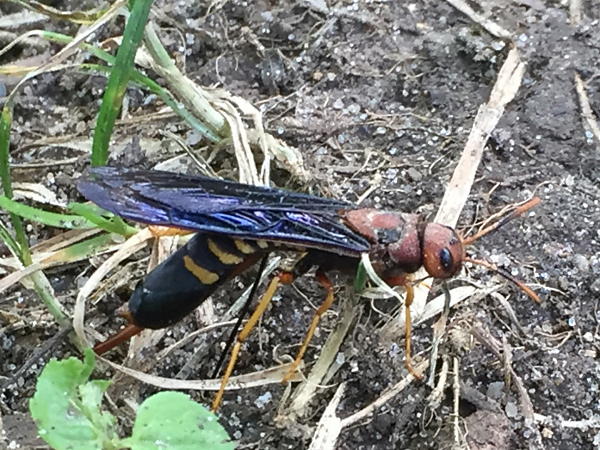 Another forest dweller, Horntail wasps tend to have thicker bodies than the Ichneumon wasps. They can grow over an inch in length. The picture shows a Pigeon Horntail. It’s range extends across the United States. 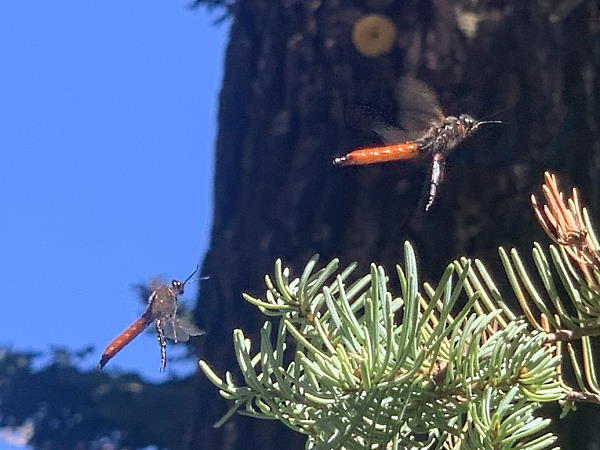 Members of the Sirex genus are fairly common horntail wasps, although their range is less than the Pigeon Horntail. Sirex Varipes is a Western species. The black and red body stands out against the conifer background, the trees most closely associated with the genus. 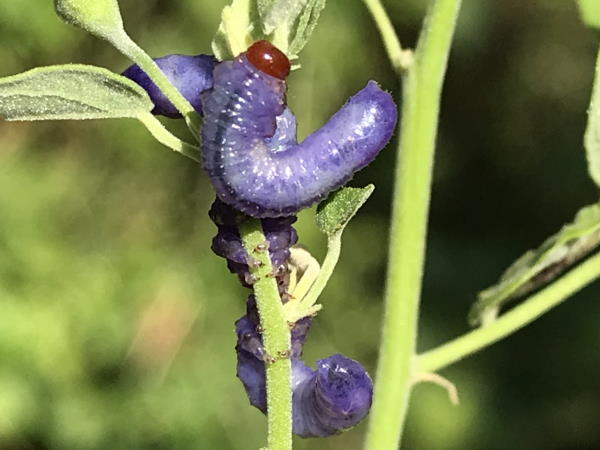 About sixty Agrid Sawflies are documented, with the Hibiscus Sawfly (Atomacera decepta) very common in the East. Here’s another mallow sawfly, Neoptilia tora, a nice purple colored sawfly larvae only found in Texas.