Plover identification (Family Charadrius) starts with the fact that they are small to medium sized shorebirds that inhabit coastal and inland waterways around North America.

Most feed on local invertebrate populations, however a few species are known to include some berries and seeds in their diet.

Worldwide the family consists of some sixty-six different species which fit into ten different genera.

The American Birding Association counts seventeen species divided into three genera (Charadrius, Pluvialis and Vanellu) as native, although the U.S. range of all but a few species is very limited. This guide helps answer basic plover identification questions.

Because of their continental range, perhaps the Killdeers and Semipalmated Plovers best represent the North American plover population.

Killdeers like the one in the video at the top of the page come close to breaking the plover mold by living in habitats outside of traditional plover coastal or inland shoreline habitats. The two bands on the breast provide good field identification marks for differentiating them from other plovers. Their diet consists mostly of insects, which makes them welcome on farmlands across the country.

The Piping Plover (Charadrius melodus), picture three, a pip of a plover with a small body, small beak and flashy orange legs, looks even more attractive during the summer when a dark stripe appears above the eyes and across the chest.

Once a quintessential shorebird of the Atlantic and Gulf Coast winter seasons, Piping Plover populations decreased in the Post WW II era, due largely to human encroachment on their breeding territory. By 1986 the population levels decreased to the point of requiring protection under the Endangered Species Act. 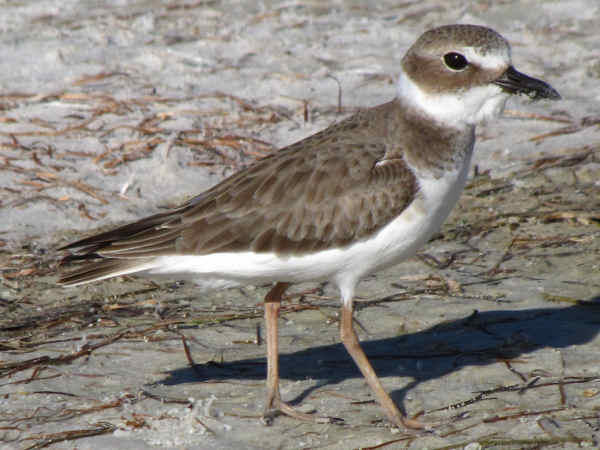 Wilson’s plover (Charadrius wilsonia) inhabits the Atlantic and Gulf coastal areas of the Southeast. The picture highlights the bird’s thick bill (used for catching small crustaceans) and beige legs. It says little about the bird’s size.

Reliable population estimates are lacking, although experts hypothesize a declining aggregate population trend. Maryland and Virgina list them as locally endangered, and Audubon placed them on the watch list.

Their open area nesting practices contribute to their declining numbers. The amount of open beach space within their historical range continues to shrink. On remaining beach areas, their nesting can be disturbed by human and pet encroachment as well as dealing with egg predation by resident mammals and birds. 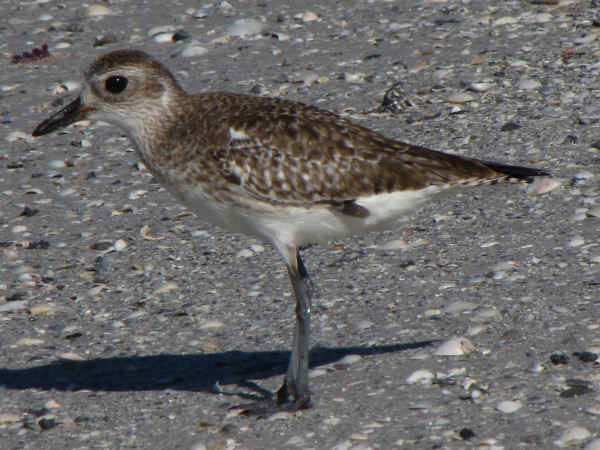 The black chin and belly along with the checkered back feathers of the Black-bellied Plover (Pluvialis squatarola) in breeding plumage presents an eye catching image for even the least enthusiastic of bird enthusiasts.

They are fairly large plovers that nest in the Arctic and winter along both coasts. Lack of competition in their breeding grounds contributes to a stable population. 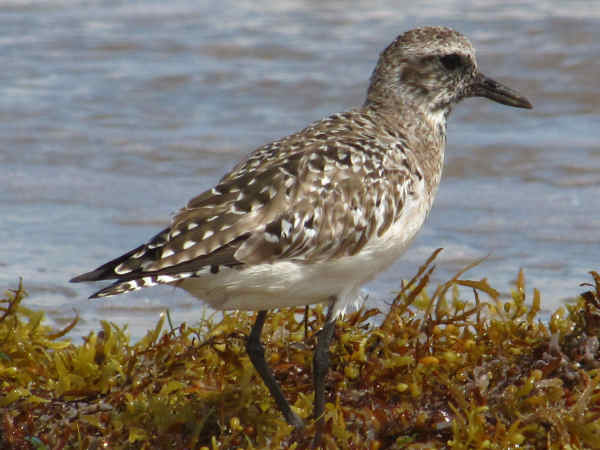 Golden Plover on the beach.