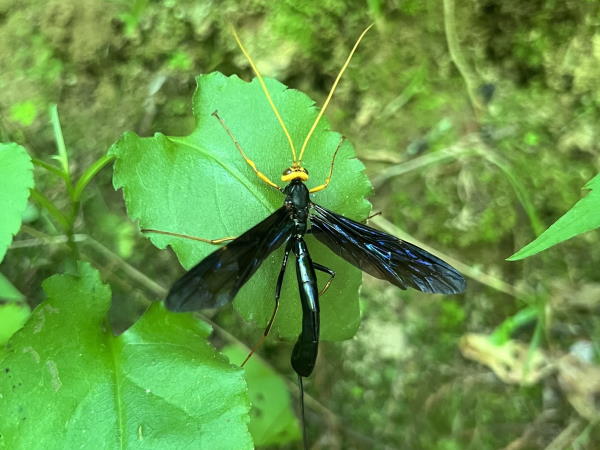 Wasps Exact counts of wasp species remain a bit soft because entomologists expect many remain undescribed. Regardless, most of the species belong to the Parasitic wasps category, a catch all term that applies to the fact that they skip nest building and deposit their eggs directly or in immediate vicinity of their prey.

With over ten thousand parasitic wasps already identified in the United States, they rank as the largest group of wasps, accounting for roughly seventy-five percent of all wasp species. This fact partially explains their popularity as biological control agents. For example, mass rearing of the wasps found in aphid parasitoids for agriculture use constitutes one portion of the biological control market that includes additional insects such as lady bugs and lace flies.

While no means extensive, this brief introduction to parasitic wasps provides four rules of thumb to help with some basic identification.

Starting with body size, the picture at the top of the page shows the Black Giant Ichneumon wasp. It belongs to one of the easiest identified groups of ichneumon wasps, Giant Ichneumonid Wasps (Megarhyssa). Four species inhabit wooded areas throughout the United States and females can grow close to three inches in body length with more than an inch added for the ovipositor.

The large black body and yellow head and legs serve as the primary identification clues. They are very common in forests east of the Rocky Mountains. 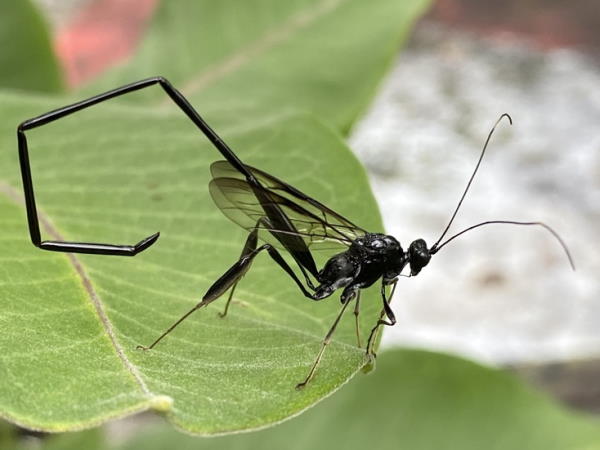 This next picture shows a Pelecinid wasp, another large forest dwelling wasp of the Eastern United States. Growing over two inches in length, they might be mistaken for an Ichneumon wasp. However, fit into a different family. 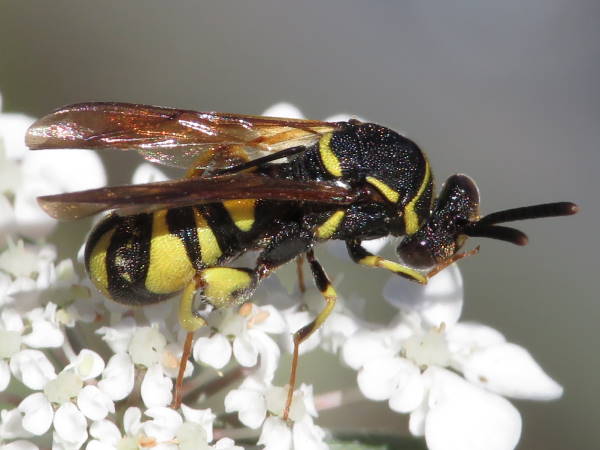 In fact, the smallest of the small, the False Fairy Wasps (Family Mymarommatidae), might grow to 0.028 inches in length. The microscopic size means there’s a very small probability that any wasps enthusiast will get a picture.

Put in size perspective, the next picture show a related Chalcidoid and member of the Leucospidae family,Lleucospis affinisin. Growing between one-quarter to one half inch in length, they rank among the largest members in the Chalcidoid wasps superfamily.

Look for them on flowers that host a variety of smaller wasps with yellow body patterns such as beewolves, some potter wasps, square headed wasps and weevil wasps. The thick legs and rounded abdomen provide help with initial identification. 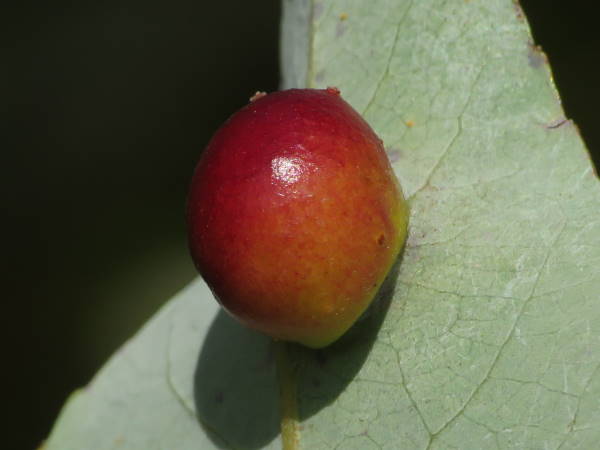 In terms of species numbers, gall wasps in the larger Cynipoidea superfamily, are the third largest group of parasitic wasps. Most are also very small. However a few species might reach one-quarter of an inch in length. They inhabit all areas of the United States and are easily discovered by the presence of their galls or abnormal tissue development on trees and bushes in the yard. 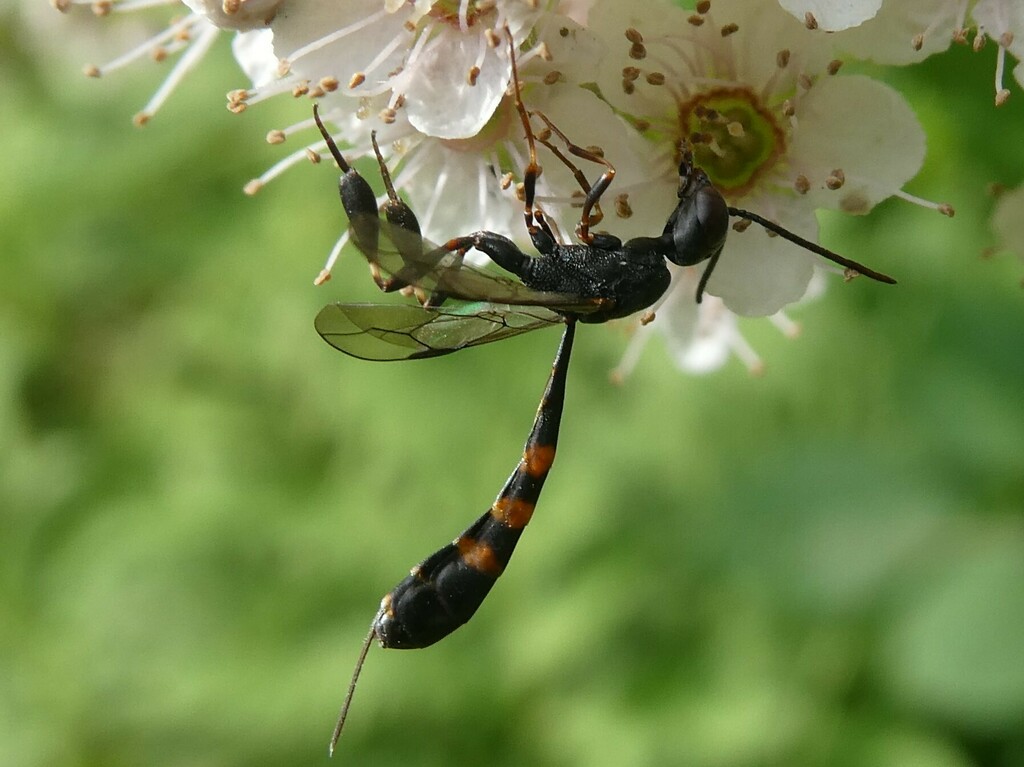 Color and the shape of the legs also help identifying Carrot Wasps, another family of parasitic wasps can be differentiated from the Ichneumon wasps, and possibly some of the thread-waisted Ammophila wasps by the presence of larger back legs with some feathering features. 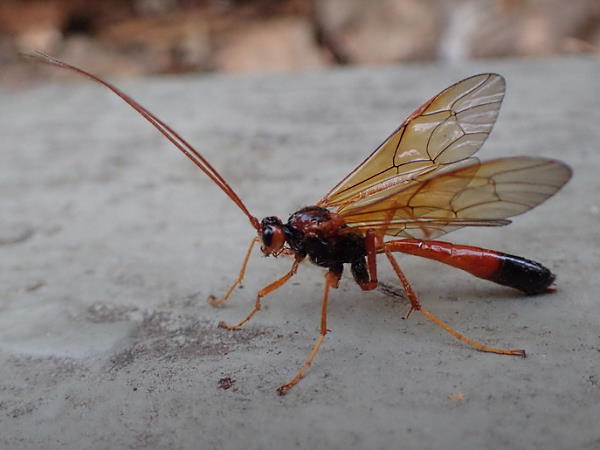 With close to seven thousand documented species members of the Superfamily Ichneumonoidea rank as the largest group of parasitic wasps. While all of the species are not quite as large as the giant ichneumon wasps, many species are sufficiently large to make them more easily seen and photographed by the average wasp enthusiast.

Together with the Chalcidoid and Cynipoidea wasps, they represent around ninety percent of all known, native parasitic wasps.

Identifying any one species is problematic because so many of them share similar physical characteristics with other wasps. The picture at the top of this section shows a species with no common name, Opheltes glaucopterus. A quick look at the body, especially the thin red and black abdomen shows a similarity to the Ammophila wasps and carrot wasps. Interestingly enough, they also share the same physical characteristics with another Ichneumon species, Neamblymorpha milva.

Wing cell patterns also help with wasp identification, and the wing pattern suggests the specimen in the picture is Opheltes glaucopterus. 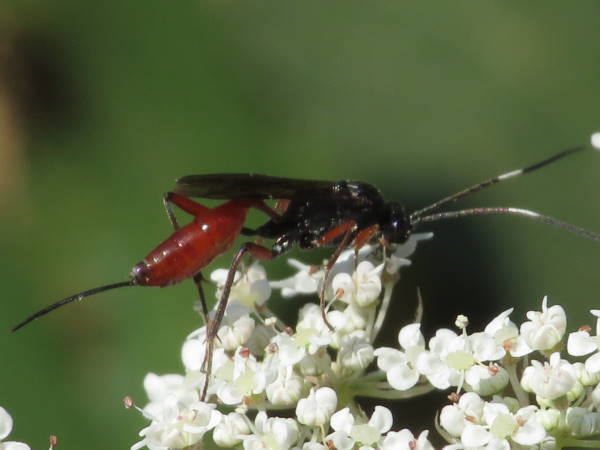 The black and red body on the wasp in the next picture, along with the white stripes on the antennae suggests a Braconid wasp. Females are also known to have large ovipositors. 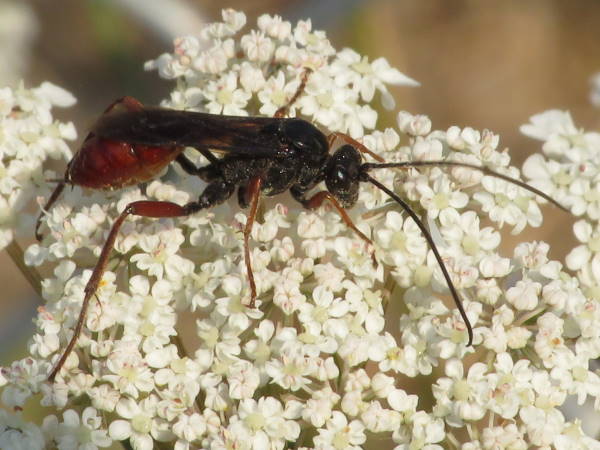 Male ichneumon wasps, like the one pictured lack an ovipositor which can also cause identification confusion. In these cases, the long antennae serves as the best clue for situating the wasp in the picture with the Ichneumon. 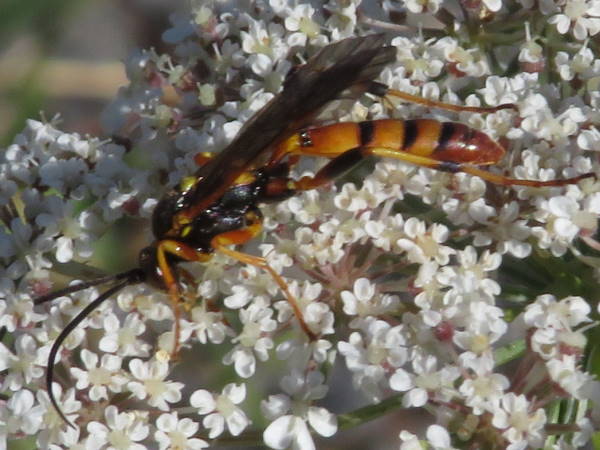 This male has a thinner waist, and again the long antennae serves as a clue for placing it in the Ichneumon group. 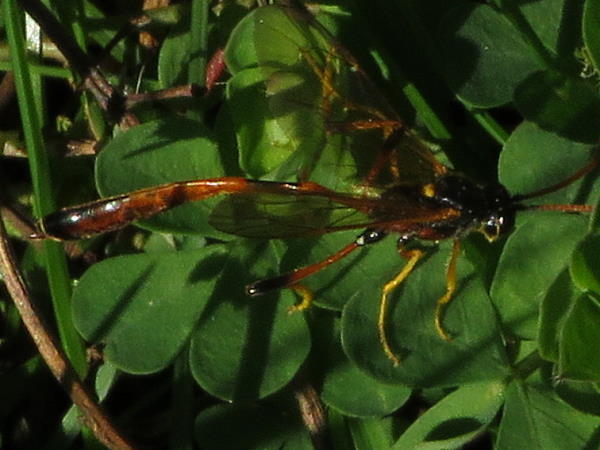 Next comes an ichneumon wasp with a short ovipositor, probably a member of the Therion genus. This group of Ichneumon wasps are fairly common in residential areas. They often fly around ground level in search of caterpillar hosts and be initially identified by their colorful bodies and legs. 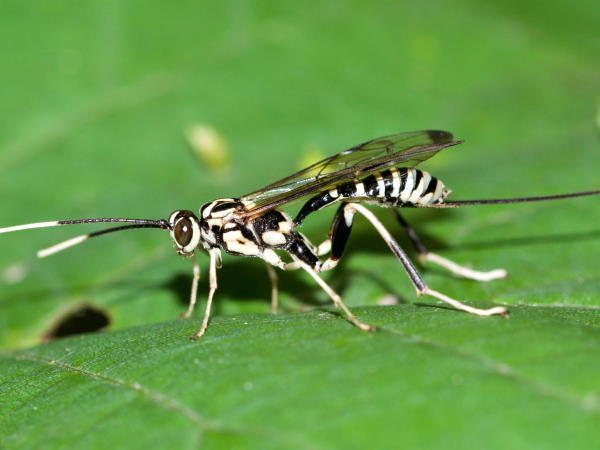 Many of the species have black and white body patterns, making it important to note the particular patterns. Arotes amoenus, for example, is fairly common across most of the northern half of the United States, east of the Rocky Mountains. White stripes on the antennae, white legs and white stripes on the abdomen are helpful identification clues. 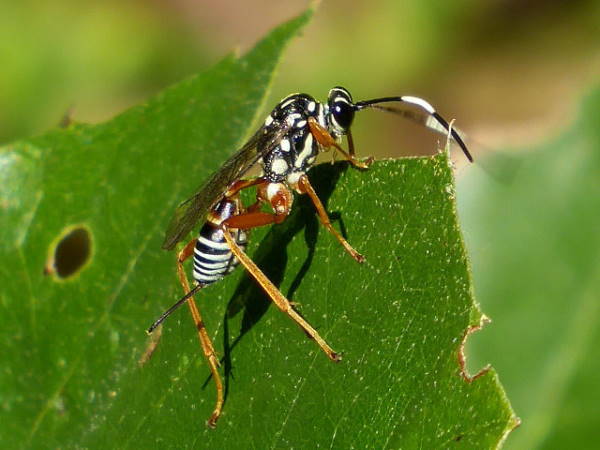 Compare it with another fairly common species in the East, Baryceros texanus. The body shows many physical clues to identification including white stripes on the antennae, white spots on the thorax and yellow legs. 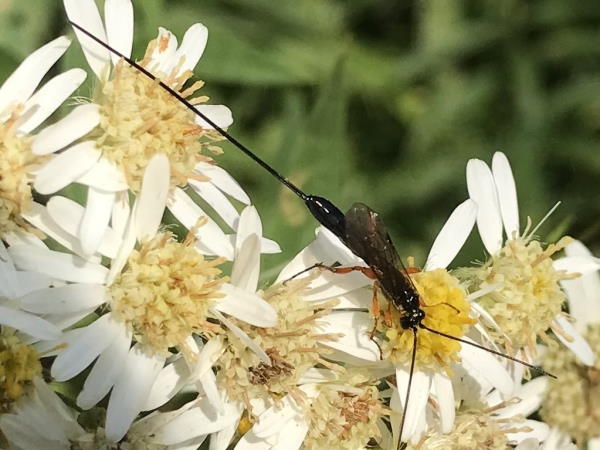 According to Minnesota Seasons, Pimpla pedalis is a medium-sized, black and orange ichneumonid wasp. It occurs throughout North America north of the 38th parallel, which extends from northern Virginia in the east to northern California in the west. Larvae are parasites of many species of moth caterpillars and sawfly larvae. 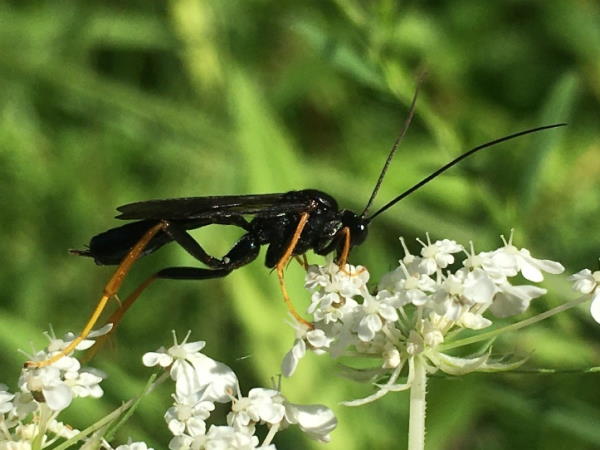 An above average size wasp, Exetastes suaveolens, can be tentatively identified by the yellow and black legs with a set of all black antennae. It’s range is a bit less than Pimpla pedalis, limited to the eastern and northern half of the United States