Almost nothing like trees says Oregon and Oregon trees easily translates into a diversity of Oregon woodpeckers.

The dozen species covering all five woodpecker genera makes Oregon a great place for visitors to catch up on the woodpecker life list. In fact, in a good birding season, eleven woodpecker species can be found by taking a quick car ride over to the eastern side of the Cascades.

Consider the fact tat North America’s most diverse woodpecker genera, Picoides, records nine separate species. Five of them live in Oregon. Including the White-headed woodpecker, pictured at the top of the page.

With a head covered by white feathers, there’s no mistaking it in the wild. It’s a regional specialty bird that inhabits the forest areas of the greater Pacific Northwest.

Black-backed woodpeckers, another uncommon species, reside in the Northern Boreal forests, especially those that suffer some type of damage. That’s the case because their diet consists primarily of insects, especially wood-boring beetles that flock to large dead and moribund trees.

American Three-toed Woodpeckers typically get introduced as the most hardy of the native woodpecker species. They breed farther north than any other American woodpecker, including in Oregon.

Downy and Hairy woodpeckers are common across the United States, and look very similar.

Downy Woodpeckers, the smaller of the two, also have a smaller bill.

Compare the picture of the Hairy with the Downy and the larger bill of the Hairy woodpecker becomes obvious. Otherwise, the black and white striped face, white belly and back feathers look very similar. Males also have a red crown.

Both species are comfortable in forests and residential areas alike. Look for them at the backyard feeder. 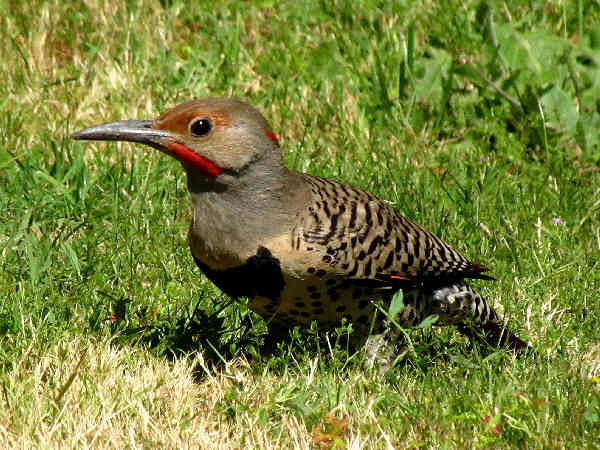 Oregon hosts the West Coast subspecies of the Northern Flicker called the Red-shafted Northern Flicker. Males, like the one pictured are differentiated from females by red patch on the cheek.

While they are mostly ground feeders, scavenging for ants in the lawn, they do take to back yard feeders and especially enjoy a snack of suet and water. With a life span that often exceeds the five year mark, homeowners might expect a long term relationship with any flickers they might attract to the back yard feeder.

Acorn woodpeckers are the most common. They inhabit oak groves, spending their days gathering acorns. Once gathered, the acorns get stored in tree holes or nearby wooden structure such as fences and telephone poles.

Four sapsucker species (Sphyrapicus) drill their wells in trees from coast to coast. Oregon has three of them.

The dominant West Coast species, the Red-breasted Sapsucker (Sphyrapicus ruber), pictured, the West Coast variant, spend their summers in higher elevation forests near rivers and streams. Some populations migrate down to the valleys during winters.

Like other sapsuckers, they are not typical feeder birds, only occasional.