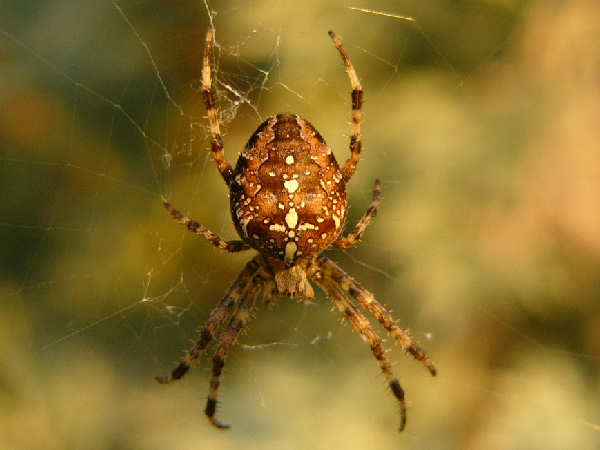 Orbweavers in the genus Araneus rank as some of the most common spiders found around residential areas. Generally they are large spiders with colorful, patterned bodies, making for easy spider identification.

Almost three dozen species have been documented in the United States, so there’s always a couple different species in any particular place. Consider all of them beneficial residents of the yard because they do not jump out of their webs and attack the family or family pets. Additionally they work as natural pest control agents.

In southern states they can be found almost year round. As one moves north, the season shortens.

Finding all three dozen species might also be a challenge because some of them build their nests in tree canopies and hunt during the evening.

Please press the green orbweavers button to see addition spiders that build round webs. Scroll down to see the spider pictures and identification tips.

The first picture shows a Cross Orbweaver, your typical garden spider. They are European imports that made their way across the United States. 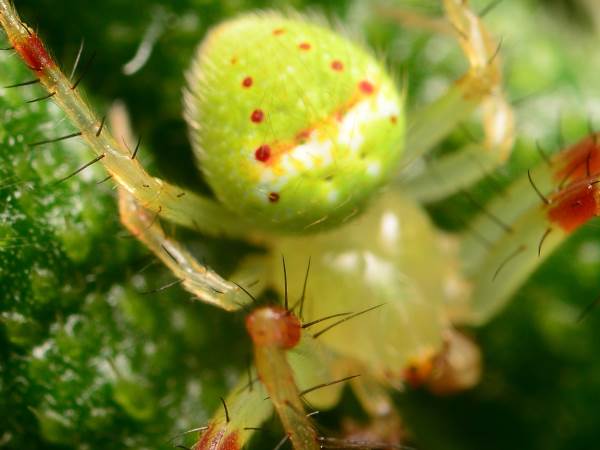 Maybe it’s appropriate to call Araneus cingulatus the Red-spotted Orb Weaver. This colorful spider builds has a tendency to build its web at the top of trees and hunt at night.

They inhabit a variety of trees in the East and Midwest. However, their web building habits makes them a bit more difficult to find. 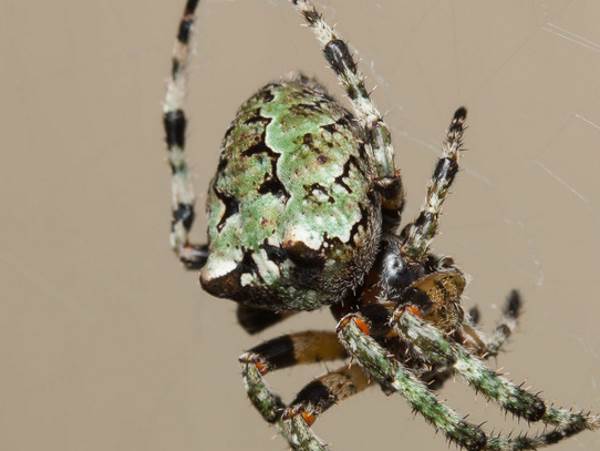 It’s hard to miss the Giant Lichen Orbweaver. Females grow to over an inch in length and the green body stands out.

For obvious reasons, it’sometimes called a red-backed orbweaver. Araneus guttulatus also has nice green legs. It can be found in the East from Canada to the Gulf Coast states.
Notice the bold cross like markings on the top of the abdomen. 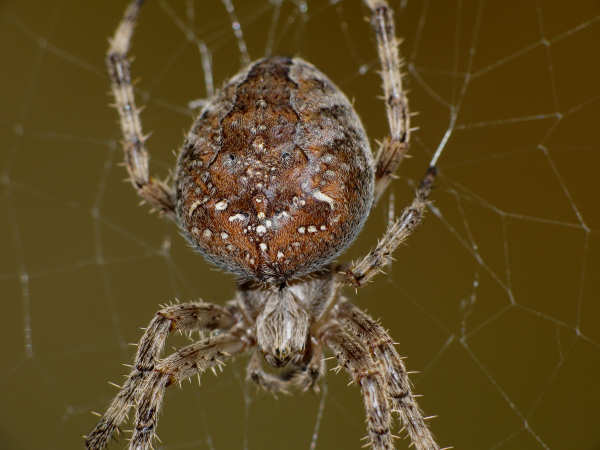 There’s no common name for the Western Araneus Gemma. The body color can change so the white stripe down the abdomen is a good identification clue.

The identification problem arises in areas where the Cross Spider and Gemma overlap. Consider the picture. It does resemble the female Gemma. At the same time, one wonders whether or not the bold cross design on the top of the abdomen just started wearing away on the spider in the picture.

This is merely a demonstration to highlight the fact that pictures are not always the definitive identification tool. 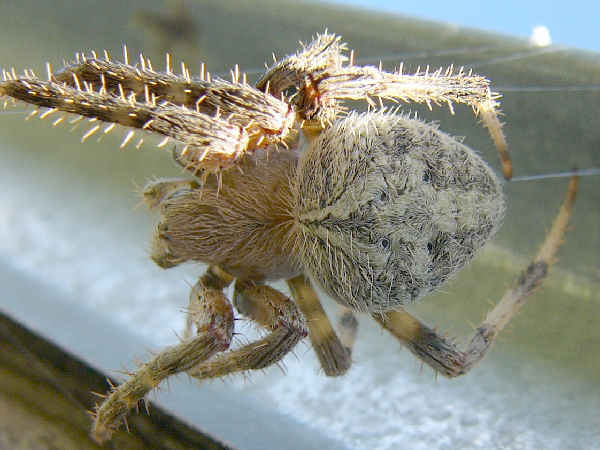 These spiders do not write in their webs. Writing spiders (genus Argiope) are given the common name because of the “V” patterns they create in webs.

Barn spiders inhabit a variety of buildings, including barns in the Eastern United States. They build very large webs. 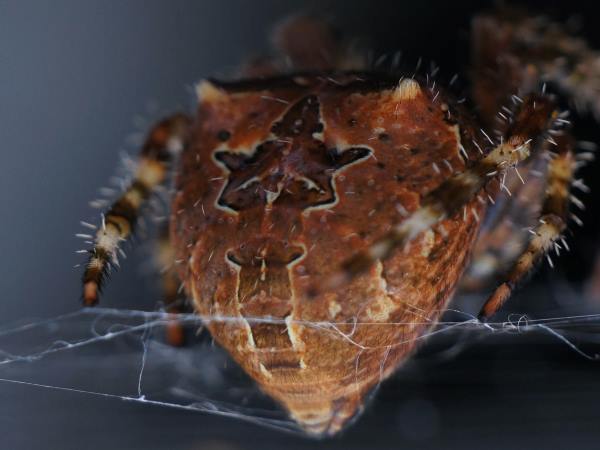 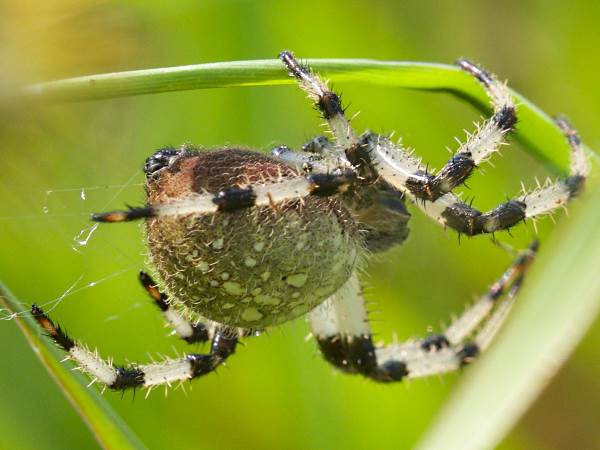 Shamrock Orbweavers (araneus-trifollum) come in a variety of colors, including the Shamrock green. The circles/spots on the abdomen are the best field identification clues.

As far as populations of orb weavers go, they can be considered common. There are populations on both coasts and along the northern border areas of the United States. 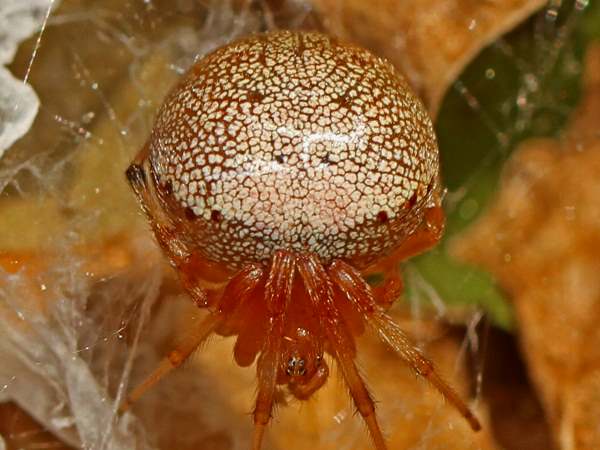 Most experts suggest looking for a leaf they place in or near the web. That’s the space they move to upon catching prey. 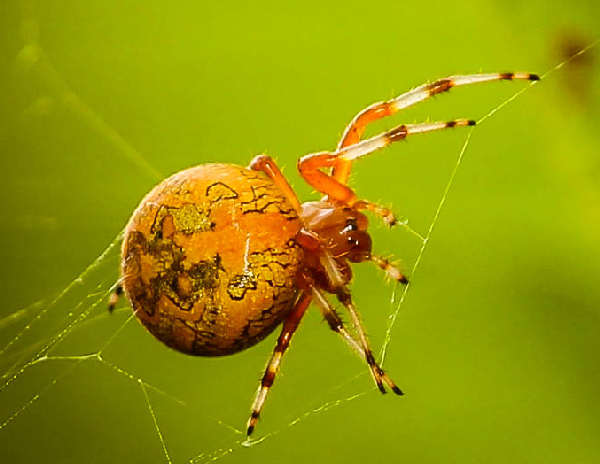 Marbled Orb Weavers (Araneus marmoreus) come in a variety of colors. Many have the classic orange or yellow body. They are fairly easy to identify and fairly easy to find east of the Rocky Mountains. 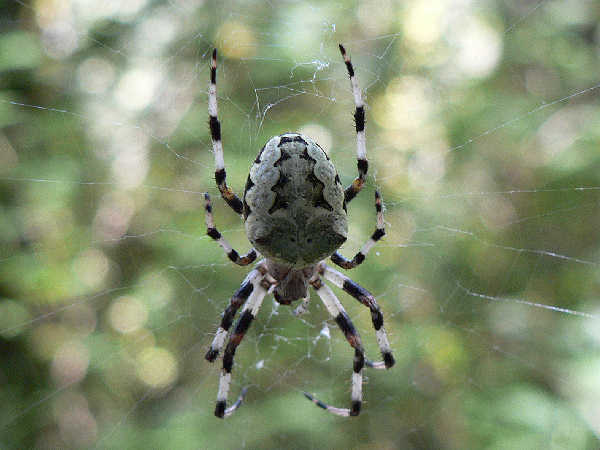 Araneus nordmanni are one of those common species along the West Coast, Northeast and the northern states between the coasts without a common name.

They are often found in forest settings. 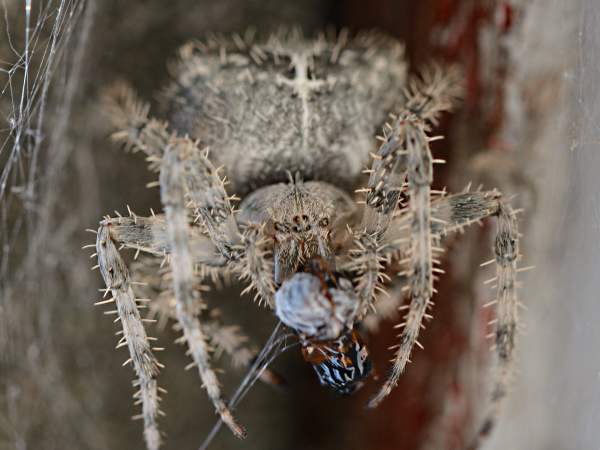 Most of the time Cat-Faced Spiders (Araneus gemmoides) have light color bodies. The light line on the front of the abdomen with two “V” around it is the best field identification clue.

They are a common species in the Western United States. There’s also a bit of a population spillover east of the Rocky Mountains into the Upper-Midwest. 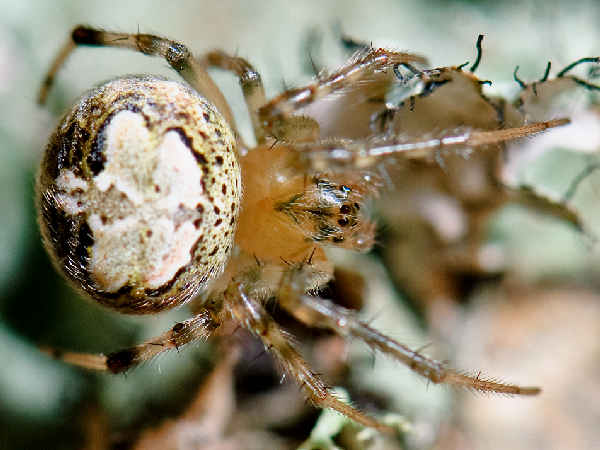 Araneus pegnia is a small and common spider in the Southeast and Southwest. The unique pattern on the abdomen makes it one of the orb weavers that is fairly easy to identify.