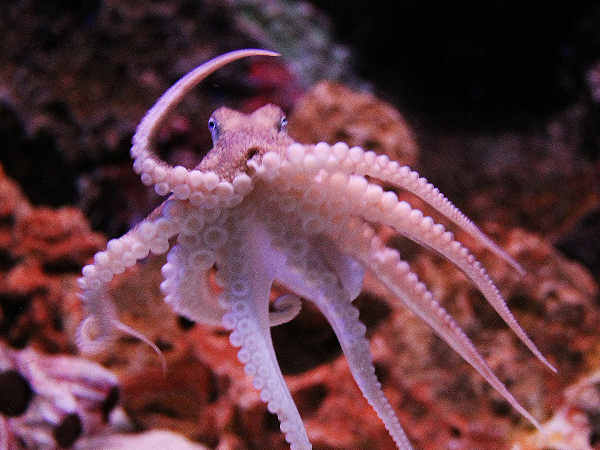 To believe in the Octopus, one must have seen it.
Victor Hugo, The Combat with the Octopus (1888)

Members of the order Octopoda, better known as octopuses, have fascinated sea goers throughout the ages. Their nickname devil fish, reflected in the quote from the Victor Hugo story, suggests that over the course of that time, knowledge of them found its roots more in myth rather than fact.

Recent research published in the journal Current Biology, titled, Global Proliferation of Cephalopods (Volume 26, Issue 10, 2016) unwittingly adds to the long line of “attack of the Octopus” stories written over the years. The researchers gathered statistics from primarily fishing by-catch reports over an extended period of time and concluded,

This study presents the first evidence that cephalopod populations have increased globally, indicating that these ecologically and commercially important invertebrates may have benefited from a changing ocean environment.

That’s close to being as scary a story as any scary spider story. So, here’s a couple of octopus facts to help round out what the current attack of the octopus theme might mean for the next generation’s story tellers. Approximately one hundred and fifty different species, most of which inhabit the sandy bottoms of warm water habitats, have thus far been documented. They range in size from a couple of inches to thirty feet in length. A few species are poisonous.

Furthermore, most share some common physical characteristics, including eight tentacles or arms (many species having webbing between the arms) along with the lack of a hard shell normally associated with members of the mollusk phylum.

Do octopus attack or grab people? Well, yes and no. All Octopus species are predators that typically use their tentacled armed to capture and hold their prey, often crustaceans that share their territory. Generally, when they cross paths with humans, they want to be left alone. However, there are always exceptions to the rule and news stories of octopus grabbing scuba divers’ cameras and grabbing scuba divers occasionally appear in the press. The biggest problem with an octopus attack comes when a diver might unintentionally encroach on the territory of one of the poisonous species. It probably would also not be fun to get caught up in a wrestling match with a giant Pacific octopus. The world’ largest octopus species that can grow up to thirty feet in length and weigh in at six hundred pounds.

To avoid being prey rather than predator, octopus can change their body color to mimic their surroundings. When they are not hunting, they are normally hiding between rocks, rather than trying to chase and grab human swimmers.

For octopus enthusiasts willing to brave a bit a danger, exploring the rocky tide pools during low tide is a great way to potentially spot an octopus among the rocks. Remember to look but not touch.

While North American pallets historically have not taken a shine to an octopus diet, their utility as a food source has a long history. According to the Food and Agricultural Organization (FAO), octopi are the most traditional of all cephalopod resources, and have been exploited as a food source for more than 2.000 years. Is there a possibility that a palate for octopi might mitigate any potential attack of the killer octopus scenario? Sure. Recent FAO statistics show the following:

Supplies of octopus improved significantly in 2015, and this is reflected in trade statistics. Japanese imports increased strongly during the first nine months of 2015, and this trend continued through the fourth quarter. Total octopus imports into Japan in 2015 amounted to 50,900 tonnes, up 27.6% compared with 2014. However, it should be noted that Japanese octopus imports were rather low in 2014, at 39,900 tonnes, compared with 58,400 tonnes in 2013. This was related to slow demand in 2914 as well as tighter supplies. As can be seen from the 2015 rising import trend, demand has recovered.

Chow down and Bob Appetite remains the phrase of choice for all those concerned about a booming cephalpod population. 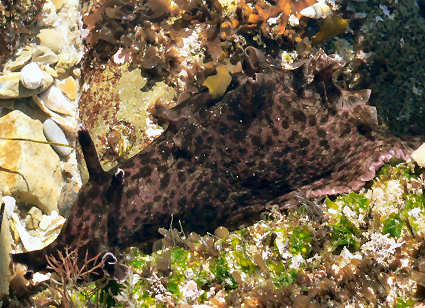 Like the octopus, a first glance at the sea hare defies the traditional definition of mollusks as animals with shells.

For the record, some sea hares have small internal shells to protect vital organs, however, they do indeed follow the octopus non-shelled evolutionary path.

The picture shows the California Brown Sea Hare (Aplysia californica), with the front and mouth side showing on the bottom left hand corner.

The two tentacles sticking up resemble a hare’s ears, giving the animal its name.

Sea hares inhabit both grassy and rocky areas of the inter-tidal region. They are herbivores that consume algae, seaweed and other plant life. They move very slowly, making them an easy prey for predators. Like the octopus, their main defense mechanism is spraying a dark inky substance in the water, which in some cases is toxic.