Ladder-backed woodpeckers and the two Sapsucker species are not at all common on the East or West Coasts. Therefore, visitors to the city are in for a treat.
Birds

The video shows the Ladder-backed woodpecker. It lives in a variety of Southwest habitats, from cacti to forest areas, and of course back yards with peanut butter feeders.

A pattern of striped feathers on the back and spots on the breast provide initial identification marks.

Finally, species in the Melanerpes genera provide another great example of diversity in the New Mexico woodpeckers ranks. Six Melanerpes woodpecker species nest among North America’s wooded areas. The New Mexico Ornithological Society documents the presence of all six species in the state. However, the presence of the Golden-fronted Woodpecker is occasional and other species have limited ranges.

The desert regions of the south attracts the uncommon Gila Woodpecker pictured at the top of the page. They make their nests in Saguaro cacti and larger desert trees.

Their adaptability extends to their dietary habits, with a variety of fruits, grains and insects pleasing to their palates. Being relatively social birds, they are happy to visit back yard feeders.

In New Mexico, this species is found in the lower Gila Valley in Hidalgo and Grant counties, Guadalupe Canyon, San Simon Cienaga, drainages of the Animas and Peloncillo Mountains, and Bitter Creek in western Grant County

In New Mexico, the species breeds mostly in mountain areas from the Mogollon mountains north, and in riparian areas (particularly along the Rio Grande Valley) from Belen north.

Red-headed woodpeckers rank as the most wide spread of the Melanerpes species, with a presence in almost every state from the Rocky Mountains and destinations east. It’s physical appearance translates into easy identification. The head, covered in red feathers, along with a white stomach stands out in a crowded woodpecker field. Both males and females share this feature. Juveniles have brown feathers on the head for their first year.

Breeding season in New Mexico runs from April to October.

Acorn woodpeckers, perhaps the best known of the western species, inhabits oak groves around the Los Alamos area, south to the Las Cruces area, where it spends its days gathering acorns. Once gathered, the acorns get stored in tree holes or nearby wooden structure such as fences and telephone poles. 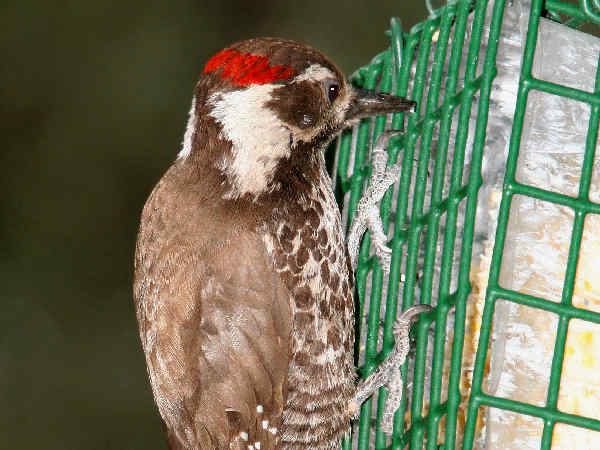 The Arizona Woodpecker ranks among the least ranging of all North American woodpecker species. It’s primarily a Mexican species and it spills over the border to Southwest New Mexico in the Animas and Peloncillo Mountains.

As the picture shows, the brown and white feathers are unique among the New Mexico woodpeckers.

Three-toed woodpeckers are uncommon in New Mexico, found at higher elevations in the forested north part of the state.

Downy Woodpeckers adapt equally well to most wilderness and residential areas in New Mexico. The presence of trees and a stable water supply are usually sufficient to find them..

Hairy woodpeckers are less common than Downy woodpeckers with few caveats. The picture highlights the most important caveat, they have a larger bill than the Downy. Otherwise, the black and white striped face, white belly and back feathers look very similar. Males also have a red crown.

The Red-naped Sapsucker breeds in the north and migrates to the south during the winter. So, it’s a fairly common species. When they migrate to the valleys they are often seen in residential areas.

Williamson’s Sapsuckers inhabit the mountain areas of the West. They breed in the northwestern mountains of New Mexico and migrate south through much of the state during the winter.

The Yellow-bellied Sapsucker is the most far ranging of all the native sapsucker species. It breeds across Canada from Coast to Coast and in the winter returns to most forested areas west of the Rocky Mountains. New Mexico is often west of the bird’s range map, although reports of wintering species make the rare birds alerts around the state.