Nevada is geographically situated so as to make Nevada woodpeckers a real treat for residents and tourists.

Las Vegas, one of the tourist hot spots in the state, is also a gateway for seeing some uncommon woodpecker species during a day trip away from the casinos. Reports of nearby Ladder-backed Woodpeckers, Williamson’s Sapsuckers, Red-naped Sapsucker and Lewis’s Woodpeckers should be enough to attract the attention of most East Coast birders not familiar with these species.

Flickers (genus Colaptes) are common throughout Nevada. They are ground feeders of the woodpecker family, with a taste for ants. The male is distinguished from the female by the red patch on the cheek. 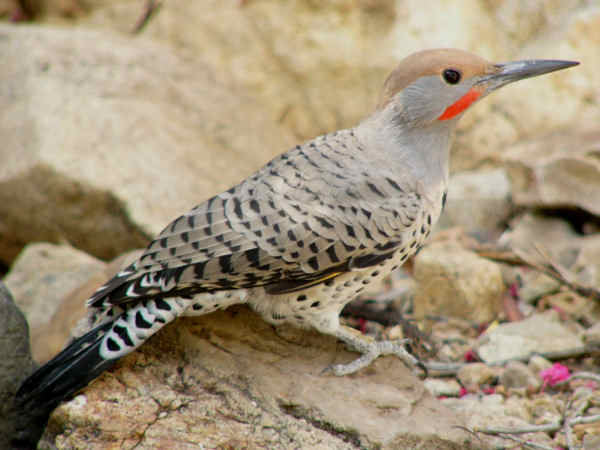 Recently a small breeding population was discovered in southern Nevada. Not much else is known about the bird’s history in Nevada. There are occasional sightings.

Common names mean something, so it’s no surprise that the White-headed Woodpecker has a distinctly white feathered head. The picture also highlights the white wing bars. There’s no mistaking it in the wild. It’s a regional specialty bird that inhabits the forest areas of the greater Pacific Northwest.

Most Americans are unfamiliar with the Black-backed woodpecker. They are not your typical feeder bird. Rather their preferred habitat is the Northern Boreal forests, especially those that suffere some type of damage. That’s the case because their diet consists rimarily of insects, especially wood-boring beetles that flock to large dead and moribund trees.

They are cavity nesters, similar to other woodpeciers. As the picture highlights, the yellow crown on the male distinguishes them from the typical red crown of more common woodpecker species. Females have a black crown.

When the woodpecker discussion turns to climate, the American Three-toed Woodpecker gets the nod as the most hardy of the native woodpecker species. It breeds farther north than any other American woodpecker.

Less wide ranging, the Ladder-backed woodpecker (Picoides scalaris) makes its home in a variety of Southwest habitats, from cacti to forest areas. A pattern of striped feathers on the back and spots on the breast provide initial identification marks. Males, like the one in picture two also have a red cap. Ladder-backed Woodpeckers look very similar to Nuttall’s Woodpecker, another Picoides species. However, Nuttall’s are limited to the coastal areas of California.

Four sapsucker species (Sphyrapicus) drill their wells in trees from coast to coast.

The Red-breasted Sapsucker (Sphyrapicus ruber), pictured, the West Coast variant, spend their summers in higher elevation forests near rivers and streams. Some populations migrate down to the valleys during winters.