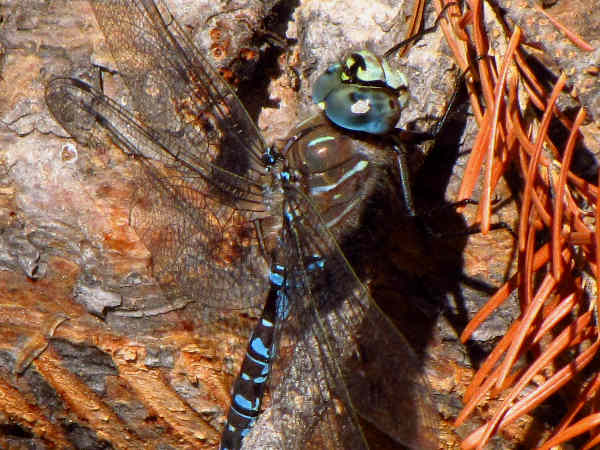 Mosaic Darners (Aeshana) account to almost forty percent of the darner species population in the United States. All of them are regional specialities and only two of the fifteen species are found in southern climates. Persephone’s Darner (Aeshna persephone), for example, inhabits areas of New Mexico and Arizona. The Paddle-tailed Darner (Aeshna palmata) inhabits West Coast and Rocky Mountain areas from north to south.

Their predominantly northern habitat often translates into northerns thinking Aeshana or Mosaic Darners whenever the topic of darners arises. From a collector’s perspective, the regionalism of the genera means there will always be the potential for a new darner dragonfly photograph to be added to the collection during a northern travel destination.

This group of dragonflies shares some very basic physical characteristics. Males have blue color on the body and females typically have green shades on the body. Markings on the face and thorax are the basis for initial field identification. The fact that species from this group are regionally based often translates into a handful of species present at any one place. Less species usually makes for easier identification.

The Variable Darner (Aeshna interrupts), top picture, initially get identified by the presence of thin stripes on both the front and side of the thorax. Often, but not always the stripes appear as dash marks rather than lines.

Based on that general description, the species in the first picture gets tentatively identified as a male Variable Darner. 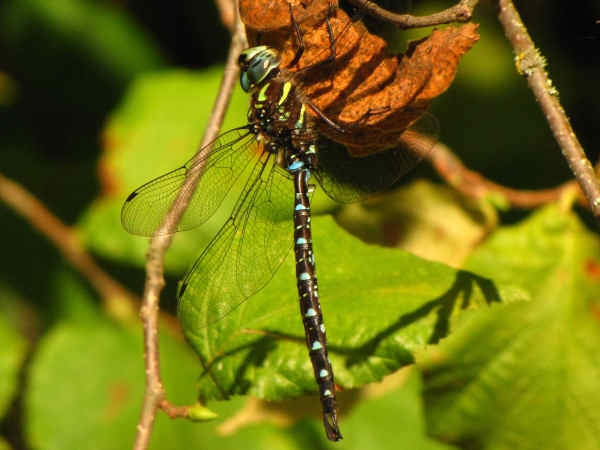 Shadow Darners (Aeshna umbrosa) range across the northern half of North America from coast to coast.

Green stripes on the top and side of the thorax serve as their basic field ID clues.

The top thoracic stripes often split into two, with a small rectangle showing on the bottom of each stripe.

Usually Shadow Darners emerge during the late summer and fall. Because of their extended range, they can be found flying somewhere during the summer months. 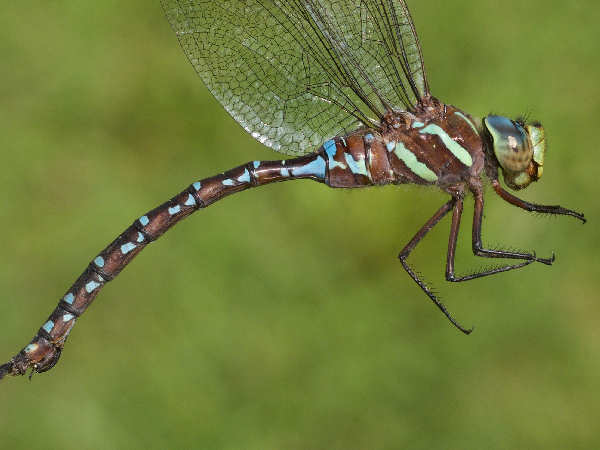 Black-tipped Darners (Aeshna tuberculifera) inhabit areas of New England, west to Washington State. The name characterizes the physical feature of the tenth abdominal segment. Females have both a blue and yellow form. 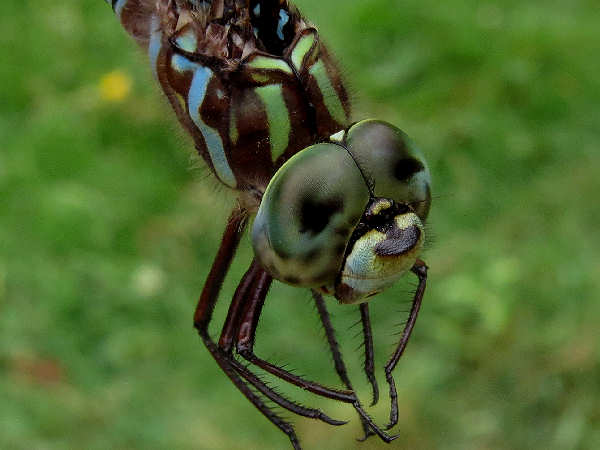 The name Canada Darner is a good indication of the northern territorial preferences of Aeshna species. It can be found in New England and most of the other border states.

Often the irregular or notched look at the side thorax stripes are a good field identification clue. 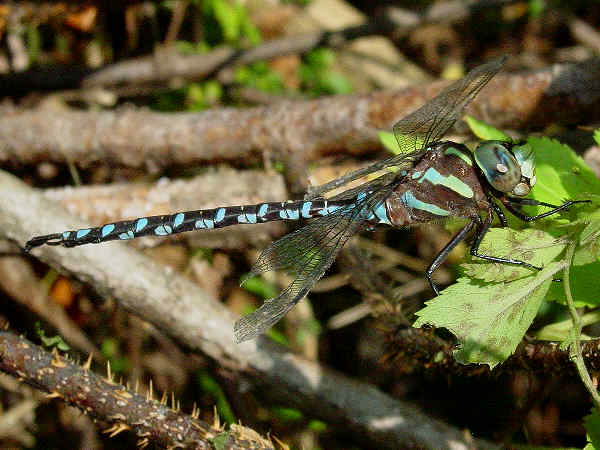 Lance-tipped Darners (Aeshna constricta) also have a very extended range. With the exception of the Southeast and Southwest, they inhabit water areas from coast to coast. 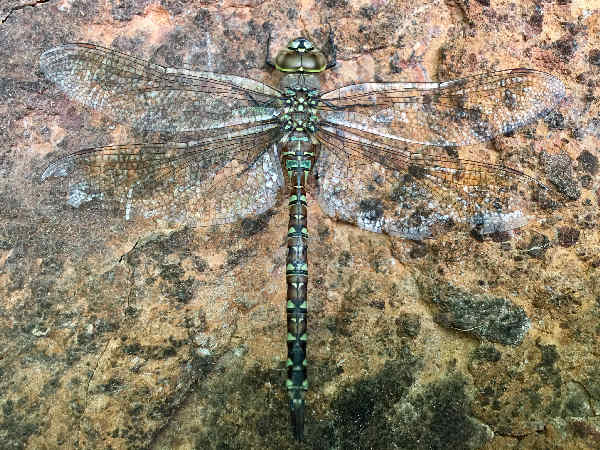 Paddle-tailed Darners (Aeshna palmata) are a wide spread Western species, with a presence along the West Coast and the Rocky Mountains. 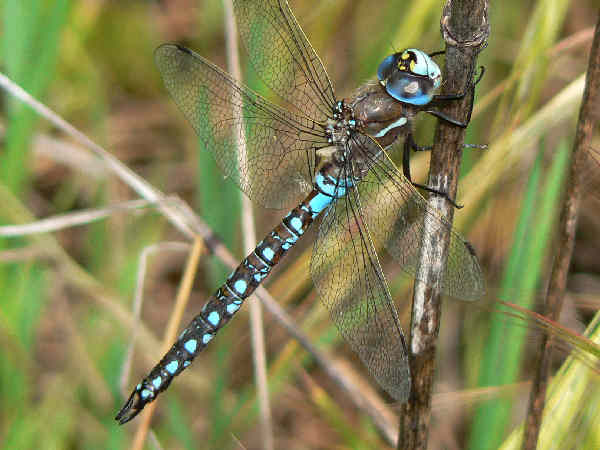 With the exception of the Southeast, five Rhionaeschna species inhabit water areas throughout North America. Often referred to as Neotropical darners, the Rhionaeschna tend to physically resemble the Mosaic darners.

The California Darner (Aeshna californica), pictured, often can be found near western waterways during the spring.

The yellow spot at the top of the head, and the lack of top thoracic stripes, represent distinctive field identification marks. 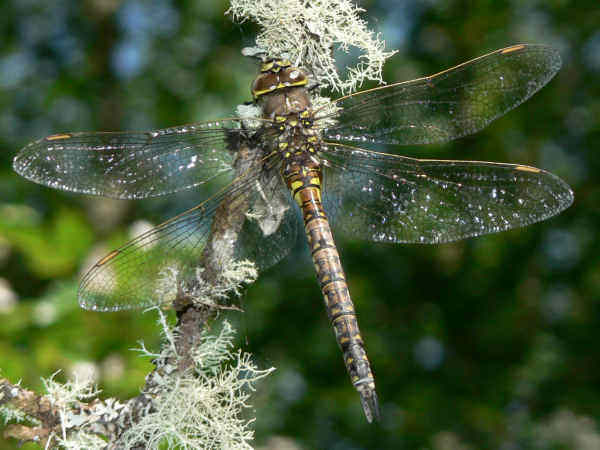 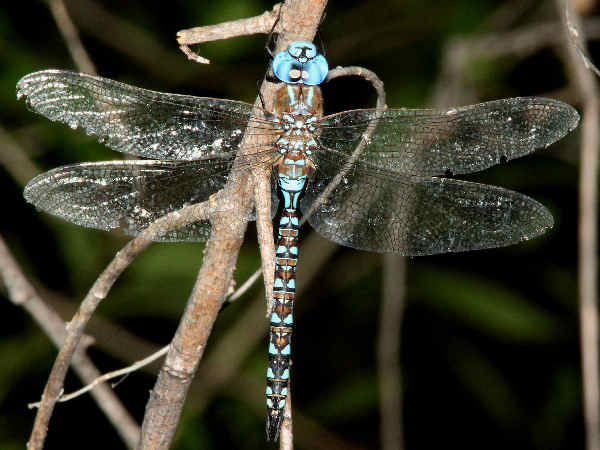 Blue-eyed Darners can initially be identified in the field by the blue-eyes, of course. A pair of stripes on the thorax also help differentiate it from the California Darner. 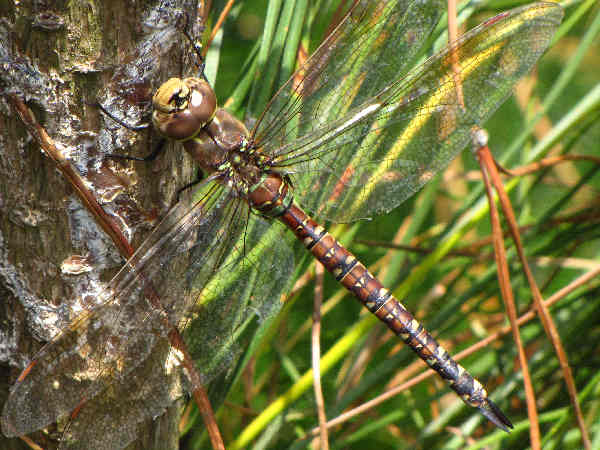 Females can have a green or yellow coloration to the body.

Their territory overlaps along the Pacific Coast. I also extends to the Southwest and areas of the Rocky Mountains. 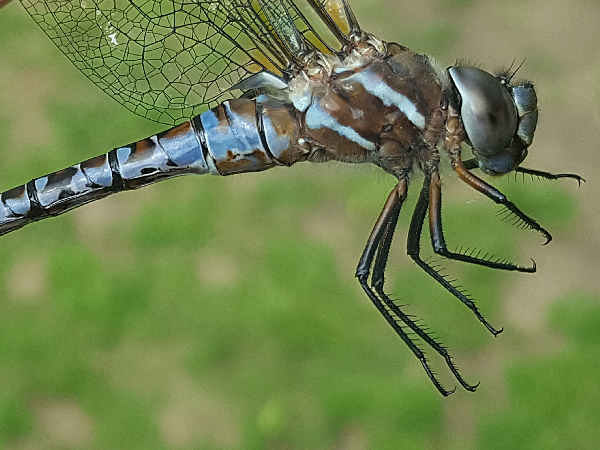 The Spatterdock Darner is the Northeast Species for this genera. Look for a pair of stripes on the top as well as the side of the thorax.