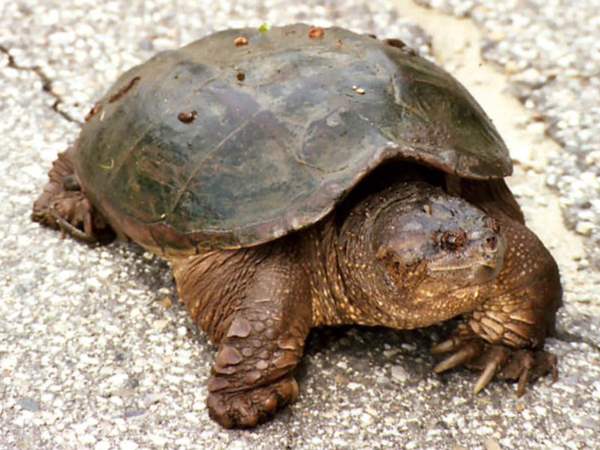 Because of their northern location Montana turtles cover only four species in three separate genera. In the area of reptiles they have a bit more diversity. The green snakes button leads to additional information.

Common Snapping Turtles and Spiny Softshell turtles are the two species subject to the greatest amount of population stress. Experts often provide a multi-factor explanation of population declines including habitat loss and degradation due to human development projects.

The use of Rotenone as a chemical fish management tool to support the state’s popular sport fishing industry has also been a topic of conversation when it comes to Montana turtles management.

Because of their size, human harvest for consumption are also cited as factors that also place stress on snapping turtle and spiny softshell turtle populations.

Common snapping turtles are the largest turtles in the state. Their shells can grow to around twenty inches in length and they can weigh over seventy five pounds.

They are categorized as omnivores, consuming most foods in their territory including crayfish, snails, fish, amphibians, snakes, small mammals, and birds. The common name snapping turtle explains the force of their jaws. It’s fairly easy for them to crunch down on any of their prey.

Montana lists them as a species of concern because of lack of information about their population. Their range is a small part of the southeast part of the state with suitable habitat such as lakes and ponds. 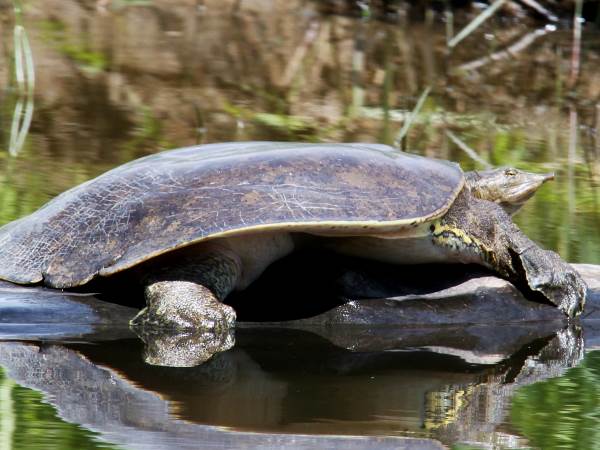 It’s easy to both see and identify Spiny Softshell Turtles (Apalone spinifera) in the state. As the picture shows, they enjoy basking in the sun. Their low, flat shells and pointed noses provide a unique look. No other turtle species in the state looks similar.

Finding them might be a different story. Another species of concern, Montana represents the northwest extent of their range. Their range extends throughout the eastern part of the state. According to Montana Fish, Wildlife and Parks, they have been studying Spiny Softshell populations for about a dozen years, catching and estimating populations in the Yellowstone and Missouri River drainages. 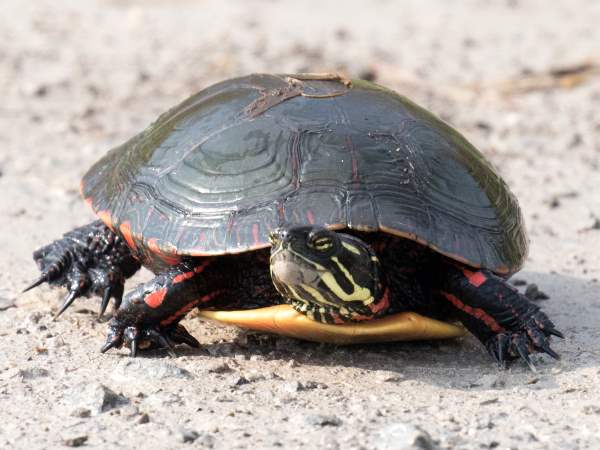 It gets cold in Montana so it’s a good thing that Painted Turtles (Chrysemys picta) turtles can hibernate at the bottom of their ponds and lakes for six to seven months every year. Their range extends across the state.

They are the most common Montana turtles and when they emerge from hibernation, their red painted legs and shells make them very easy to identify. 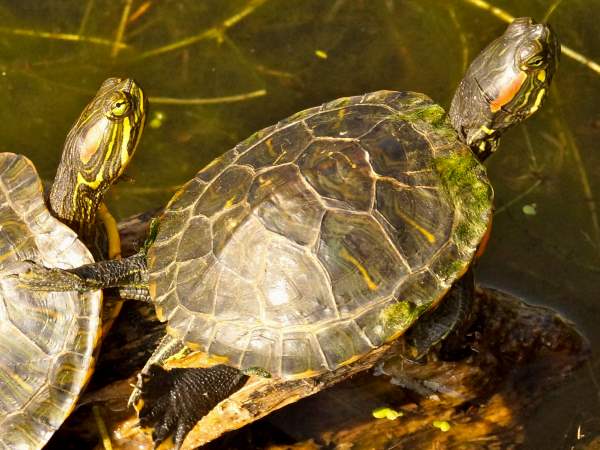 Red-eared sliders are not native to Montana. They are an eastern species that were popular in the pet turtle trade. Pet owners often release them into their local ponds and the then establish populations.

Population estimates for the state are sketchy. In 2014, they were banned for sale in the state. The hope is that the existing populations will be limited and potentially eliminated.