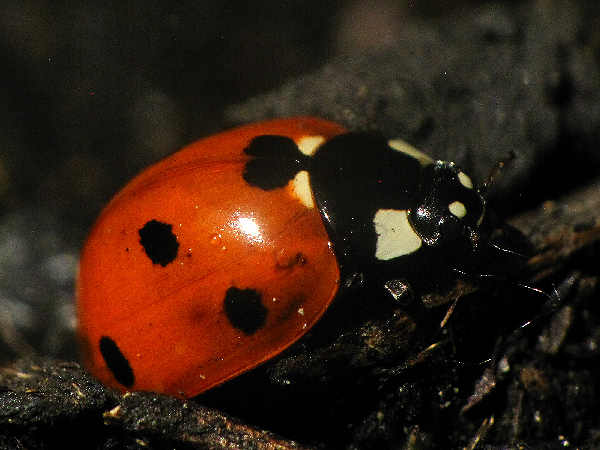 What types of ladybugs are popular?

The Nine Spotted Lady Beetle (Coccinella novemnotata), for example, New York’s state insect, use to be one of the most common types of ladybugs in the Northeast United States. Finding one today in New York, or any place in the Northeast is a very challenging task.

Scientists hypothesize that one species, the Seven-spotted Lady Beetle (Coccinella septempunctata), one of many types of ladybugs native to Europe, were introduced into areas of the Northeast United States in the Post-WWII era to fight aphids. These hardy insects out competed other types of ladybugs for the available plant and food sources in many areas.

Its range now extends from coast to coast, and it has been identified as a potential cause of native lady beetle population declines, including the Nine-spotted Lady Beetle. The Seven Spotted Ladybug is pictured at the top of the page. The large seven spots on the wings, and the facial pattern provide good identification clues. 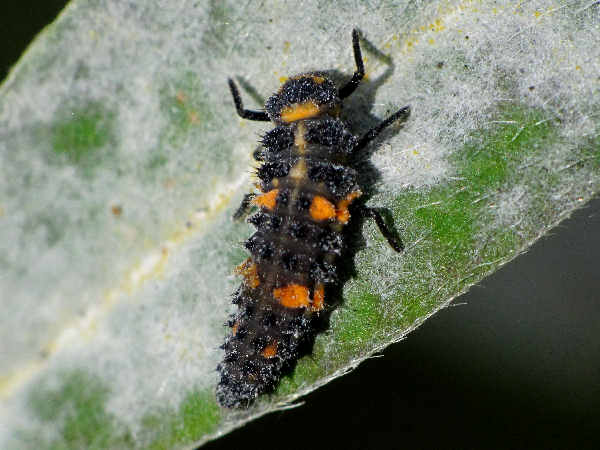 Ladybugs experience complete metamorphosis like other insects. Therefore, the question of how to identify ladybugs can also be answered by looking at ladybug larvae and ladybug pupa. 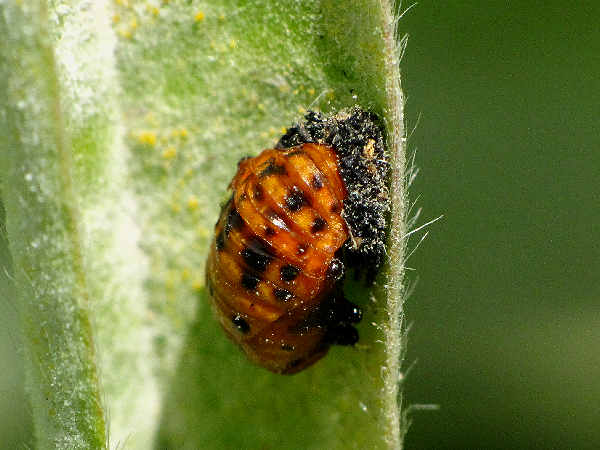 The larvae in the picture with three spots along each side of the body is a Seven Spotted Ladybug larvae. Larvae from all types of ladybugs, like butterfly larvae (caterpillars) have a unique look.

Ladybug pupa, as shown in the third picture, are hardened cases often attached to leaves. They provide security for the final stage of development, allowing the fully formed adult to break through the walls and walk out when ready. 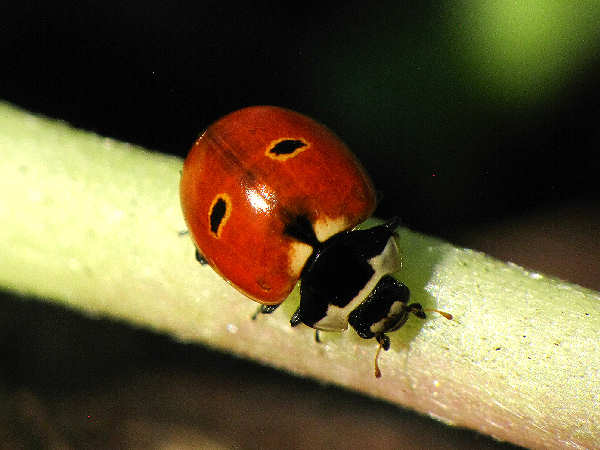 Looking at ladybug pictures and getting a feel for wing color and spots also helps with ladybug identification. Formally, ladybug wings are called elytra and the neck area is called a Protonotum. Those two features, wing color and face and/or neck patterns represent the second set of information often used for identification purposes. For example, because they buck the traditional ladybug look of orange wings and black spots, many people are interested in identifying a ladybug with black wings and two red spots. The ladybug pictures presented here cover a broad range of representative species. 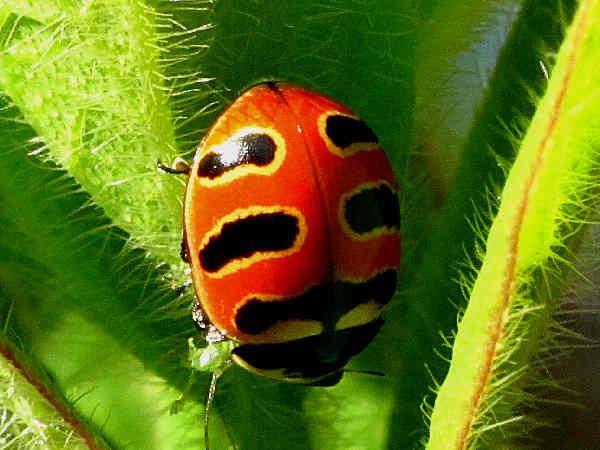 In addition to the nine-spotted and seven-spotted Coccinella species referred to above, another species in the genera, the Three-banded Lady Beetle (Coccinella Trifasciata) provides additional examples of within genera wing differences. It serves as a ladybug identification reminder that wing pattern does not always represent the best genera field identification tool.

Compare the first two pictures in this section. They show two different Three-banded Ladybug subspecies. The western subspecies, Coccinella trifasciata subversa, first picture, often, but not always, has a few small wing spots. The neck and/or facial pattern, in this instance, a black and white color combination, without a unique pattern, serves as the key field identification clue for this species. The predominantly eastern subspecies in the second picture has the same facial and next pattern. The difference is that Coccinella trifasciata perplexa, can easily be identified by three dark bands on each elytra. 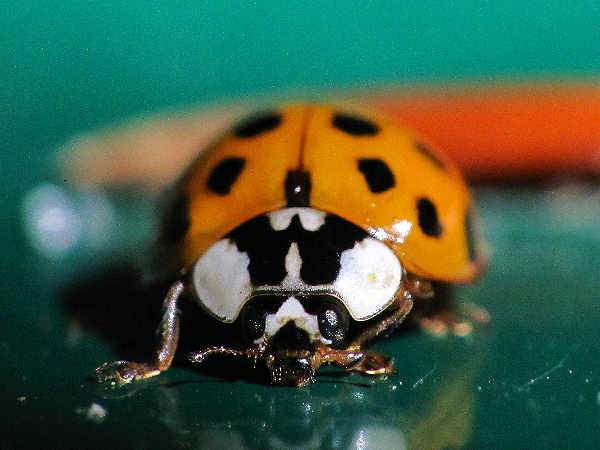 Multicolored Asian Lady Beetles (Harmonia axyridis) share the commercial ladybug market with Seven Spotted Ladybugs, and therefore they also rank as the widest ranging of all types of ladybugs.

Their rise to the top of the commercial market can be readily explained by their behavior. They tend to congregate in large numbers, possibly thousands, during the fall and winter hibernation period, making them profitable to collect and sell in the spring garden season.

Preventing the lady beetles from entering is the best approach to keeping them from becoming a household nuisance in fall and winter. Caulking exterior cracks and crevices before the lady beetles seek overwintering sites is the best way to keep them out. This will also keep out other unwanted insects such as wasps, and will save homeowners money on energy costs.

Identifying the Multicolored Asian Lady Beetle using wing spots as a guide can be problematic because wing spots vary from species to species. The picture highlights a distinct “W” pattern on the neck, the more appropriated field identification clue. 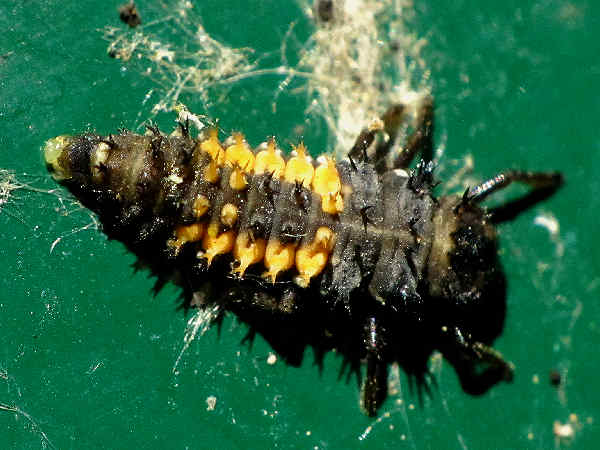 Asian ladybug larvae also have a distinct orange spot pattern as highlighted in the picture. 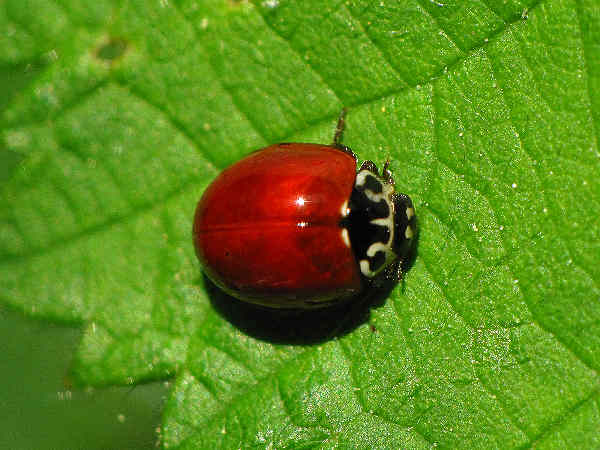 Moving on to another genera shows the limited utility of associating ladybugs with spots on the wing for identification purposes. In fact, spotless ladybugs are also fairly common species. The Polished Lady Beetle (Cycloneda munda), native to the East, and the Spotless Lady Beetle (Cycloneda sanguinea), native to the West, account for the bulk of the population of ladybugs that characteristically lack spots on the wings.

A handful of other types of ladybugs that lack spots can be found from Texas through the Western United States.

Proper ladybug identification requires matching the facial pattern to the spotless wings. The black eye spot pattern on the neck of the ladybug in the picture is the common pattern for Cycloneda species.

As the composite picture on the right shows, some ladybug species also lack the typical orange wings. The top picture in the composite shows a ladybug with black wings and a red or orange spot pattern.

The picture might show Hyperaspis postica, a West Coast species. Because wing spot patterns change from species to species, it’s worth noting that the picture might also show a Chilocorus, another ladybug species with black wings and two red spots.

The next two species in the picture move the conversation to types of ladybugs with multiple spots. Picture two shows a species from the Anatis genus. The facial markings serve as the best field identification clue. The eye-spotted species, for example, have distinct eye rings around their spots. The fifteen-spotted species come in red and white wing colors.

Moving to species identification, the picture might show Anatis rathvoni, or Rathvon’s Lady Beetle, showing some partial eye rings around the wing spots.

With so many spotted lady beetles, the name Spotted Lady Beetle (Coleomegilla maculata) can come across as meaningless.

Some times the species in picture three is called a twelve-spotted lady beetle or pink lady beetle, because it’s color can sometimes appear pinkish.

Coleomegilla maculata is a very common Eastern species, present in smaller populations in the Southwest. 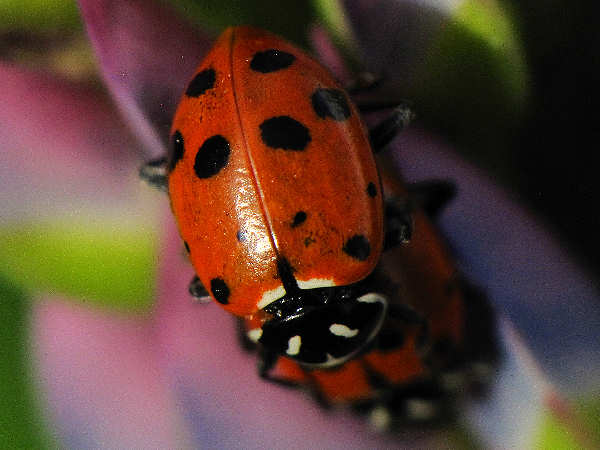 No discussion of the types of ladybugs in the United States is complete without mention of the Hippodamia genera. In total it consists of over a dozen species, including the American Lady Beetle (Hippodamia americana), an Upper Midwest and Canadian species. Physical appearance varies greatly from species to species. The picture shows the Convergent Lady Beetle, another common species available in the commercial market. Convergent ladybugs overwinter in large aggregations, where they are collected for commercial purposes.

The spot pattern on the wings varies from region to region. However the two white stripes on the black neck area often serve as good field identification clues. Today they can be found from coast to coast. 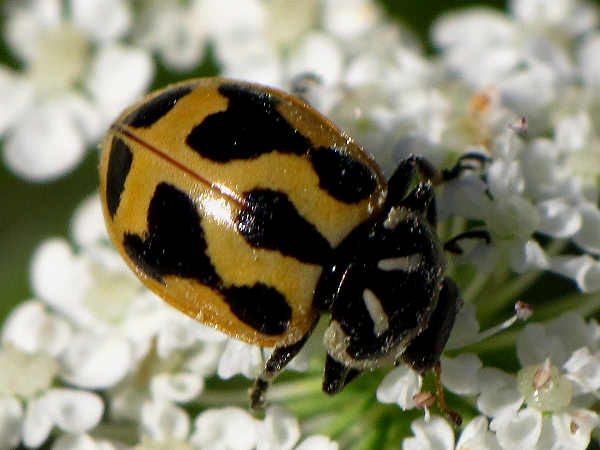 The white stripes on the Protonotum identify Hippodamia sinuata species. There are a handful of subspecies, each showing differing wing patterns. 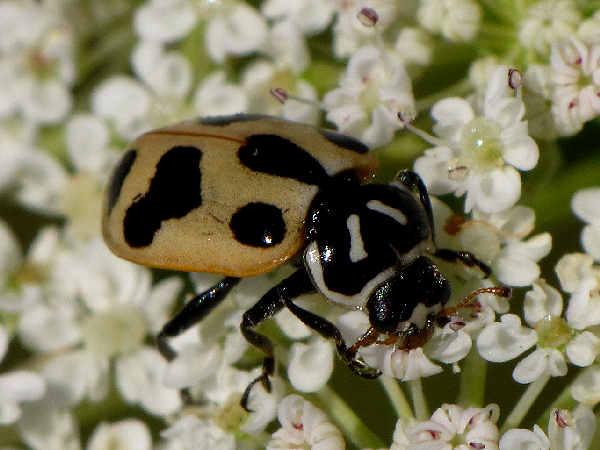 Pictures two and three shows a sinuata subspecies with variable spot patterns on the wings. 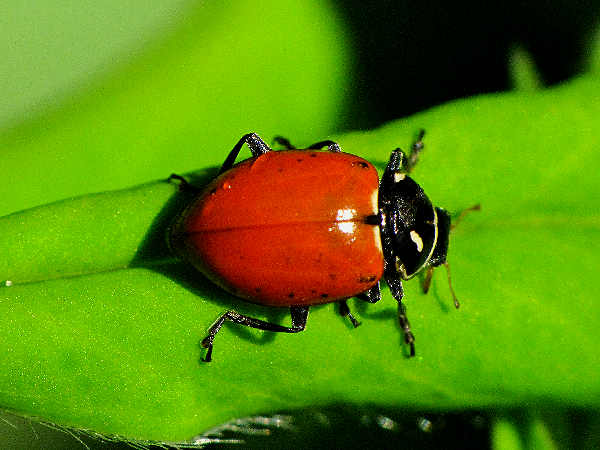 Finally, wing pattern variability in the fourth picture makes it difficult to identify the final Hippodamia species. Of note is the fact that the subject in the picture is also missing one of the white stripes on the Protonotum.