The king of snakes the Kingsnakes attain their position probably by evolutionary good fortune. They are immune to the venom of poisonous snakes such as Copperheads and Rattlesnakes. Like other constrictors, they bite their prey and then proceed to wrap their body around it until it can no longer breath.

Along with snakes, they prey a variety of rodents and other invertebrates in their territory. Their position at the top of the snake pecking order in any area means they are a relatively peaceful predator and nature source of venomous snake control.

Eastern Kingsnakes (Lampropeltis getula) generally have a black body with with a series of thin white bands down the back. The top picture shows a face view of the Eastern Kingsnake.

Kingsnakes belong to the same genera (Lampropeltis) as Milk Snakes, another colorful group of banded snakes that are common throughout the East, and present, although less common in the West. Categorizing the snakes can be tricky.

As the pictures on this page demonstrate, their banding patterns and colors suggest they are all related. Currently herpetologists lump kingsnakes together as either different species or as a group of subspecies with about eight listed in the United States.

Their docile nature and colorful bodies make them popular in the reptile trade. This page provides a sample of representative species in the kingsnake and milksnake genera that share the land from coast to coast.

Readers interested in learning about other common types of snakes in the United States can press the green snakes button.

The picture highlights how its physical features, yellow speckles over an otherwise dark body, contrasts with its relative the Eastern Kingsnake. 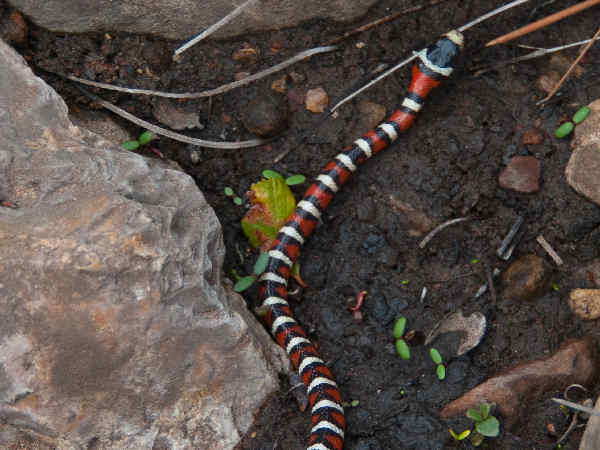 Arizona Mountain Kingsnakes bring their color in the southern portion of the Rocky Mountains. Their range is limited to Nevada, Utah and of course Arizona in the United States.

The picture highlights all the similar physical features they share with many other kingsnake and milk snake genera, a pattern that includes red stripes around the body. Upon closer inspection, they can be identified by a white face, followed by a black head. The remaining body circles are white, black and red.

Now, why is that particular configuration important? Compare the description with the next picture. The face, starting at the nose, is black. In the East, the black at the front of the face is the first physical indication for identifying the venomous Coral Snake. In the mountains of California the black face on the banded snake is the key identifying feature of the California Mountain King Snake.

California also is home to the less colorful California King Snake. It’s a black and white species that shares some physical characteristics of the Eastern King Snakes. It lives in most areas of California with the exception of the northwest Redwoods area.

Their ability to adapt to a variety of habitats means populations also extend over to Oregon, Nevada, Utah, Colorado, New Mexico and Arizona.

And this leads us back to the discussion of Milk Snakes, particularly the Eastern Milk Snake (Lampropeltis triangulum). They are literally found in multiples habitats from fields to forests and of course farms.

The story of the milk snake milking cows in the barn is usually told with the caveat, milk snakes are commonly found in barns because they are an easy source of the snake’s food, primarily rodents.

Finding Milk Snakes in the east can be as easy as taking a hike and flipping over a few big rocks or logs. The can grow up to on average about three feet in length and the red to orange to dull rust color of the bands makes them easy to spot.