Kansas woodpeckers consists of a nice variety of species covering all five native woodpecker genera. Gratography members can easily contribute to the section by registering today.

Anyone looking for additional bird identification can press the button on the left.

Red-bellied woodpeckers are year round residents of most areas in Kansas. They are larger than average birds with an outgoing personality.

Physically, the name red-bellied can be a bit misleading because the stomach feathers have barely a hint of red to them. The picture shows a male, distinguished by red feathers on the neck and crown. The female lacks a red crown. The nape is red.

They belong to the same genus as the Acorn Woodpecker, and like them, they are known to store food in cracks in trees. Their diet also consists of in season fruit, nuts and insects. They easily adapt to backyard feeders and their loud vocalizations can often be heard through the neighborhood.

Red-headed woodpeckers rank as the most wide spread of the Melanerpes species, with a statewide presence in Kansas. They tend to populated western areas of the state during breeding season and tend to be year round residents in the eastern part of the state.

Their physical appearance translates into easy identification. The head, covered in red feathers, along with a white stomach stands out in a crowded woodpecker field. Both males and females share this feature. Juveniles have brown feathers on the head for their first year. 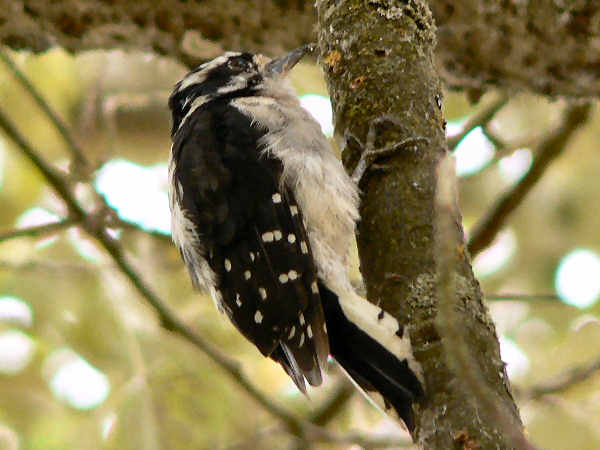 Downy Woodpeckers might rank as the most common of Kansas woodpeckers. They adapt equally well to most rural and residential areas. If trees are present, they will make themselves a year round home. In residential areas, they are common visitors to backyard feeders.

Physically, the Downy’s black and white feather pattern resembles the slightly larger Hairy Woodpecker. In instances where size comparisons might not be available, experts suggest examining the bill size in relation to the head size. Downy Woodpeckers typically have small bills. Males have a red crown and females, like the one pictured lack the red crown. 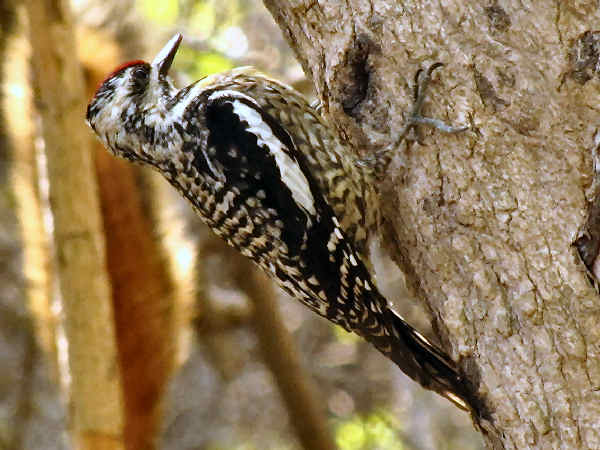 Less wide ranging, the Ladder-backed woodpecker makes its home in a variety of Southwest habitats, from cacti to forest areas. A pattern of striped feathers on the back and spots on the breast provide initial identification marks. Males, like the one in the picture, also have a red cap.

Look for them at the backyard feeder, although double check, because Downy Woodpeckers are more common feeder birds. 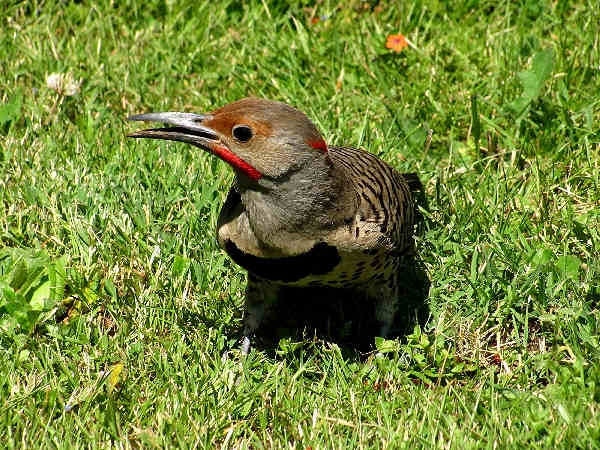 The people of Kansas recognize the Flickers as their ground feeders of the woodpecker family. They prefer open habitats such as fields and residential areas because they supply them with their primary food sources such as insects, seeds and berries. The male is distinguished from the female by the red patch on the cheek.

In addition to their insect diet, many visit back yard feeders and especially enjoy a snack of suet and water. With a life that often exceeds the five year mark, homeowners might expect a long term relationship with any flickers they might attract to the back yard feeder.

The Yellow-bellied Sapsucker is the most far ranging of all the four native sapsucker species. It breeds in Kansas and some in the east are year round residents.