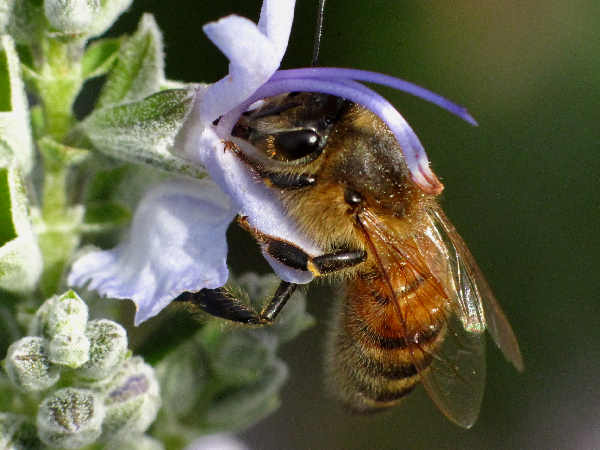 Honey bees, social insects, prized by farmers, beekeepers and gardeners for their pollination and honey production, live in hives that can number in the tens of thousands.

Honey bees do sting, and unlike others bees, such as yellow jackets, if they lose their stinger they die.

Across North America, along with other areas around the world, record numbers of honey bee colonies have collapsed, or have experienced population decreases of fifty per cent or more.

The phenomena is called Colony Collapse Disorder (CCD) and scientists are trying to determine the cause. Currently they are examining three possible causes including the effects of pesticides, the outbreak of new bee parasites and/or viruses, and other environmental causes such as decreases in the availability of high value pollen plants, water pollution and stress due to over work.

Recent research examining artificial temperatures on honey bee development and behavior might help us understand how a natural phenomenon such as global warming could affect honey bee development and behavior. The report, Behavioral performance in adult honey bees is influenced by the temperature experienced during their pupal development was based on an experiment that followed the activities of three sets of bees that were artificially raised, from pupa to adult worker status, in controlled temperatures of 32oC (or 89.6oF), 34.5oC (or 94.1oF), and 36oC (or 96.8oF).

When the bees entered the adult foraging stage, researchers found that the bees raised under the lowest controlled temperature were poor dancers, will lesser capabilities to communicate food locations to other foragers. Additionally, they suffered from a learning disability. After two weeks of foraging, the majority of the bees abandoned the hive, either going to other hives in the area, or disappearing without researcher knowledge of their whereabouts.

Based on those facts, an initial hypothesis that increased temperatures from global warming would help produce better dancing and learning honey bees sounds credible.

However, before taking that hypothetical leap, two additional facts on honey bee behavior need to be considered.

First, the researchers state that, “honey bees appear to be the only group that have achieved a high degree of homeothermy in their nests, keeping the brood combs at temperatures which, although never constant, vary within a relatively narrow window of 3oC.”

Second, the researchers state that, “First, the 40% investment in maintaining the brood temperature is a significant portion of the energy budget and attests to the importance of this activity.”

Given those sets of facts, the researchers conclude, “We propose that when outside temperatures are high, fewer heater bees will be needed and a larger number of successful foragers will be produced by the higher temperature in the brood.”

Do those facts and conclusions strengthen the hypothesis that global warming will help honey bees dance?

Yes and no. At face value, the experiment, and conclusions drawn from them, supports the hypothesis that global warming helps honey bees dance. Warmer weather means that more worker bees can devote their time to foraging rather than heating the hive. Warmer temperatures also suggest a greater probability of warmer hives, although that is not completely clear, given the fact that hive temperatures can swing in a +/- 3oC range when dealing with outside temperatures.

The researchers do not address how global warming or rising temperatures might affect the honey bee food supply. Honey bees have complex dietary needs and if climate induced temperature changes affect the landscape of a honey bee’s territory, those changes may be harmful to honey bee health. In the end, warmer temperatures may help improve honeybee dancing, but communication inherent in those dances may well signal a flight of the honey bees to a more accommodating environment.

In Feeling the Sting of Climate Change, NASA research scientist, and beekeeper, Wayne Esaias looks into the issue. He concludes,

Currently, young bees are able to grow and get out on the hunt by the time plants bloom. But if plants bloom before bees are ready, both miss out. The plants don’t get pollinated, and the bees go hungry. But more than just bees might miss a meal. NASA satellites can help us understand how climate change might affect what’s on our dinner table.