Welcome to Hawaii wildlife. Relive that Hawaiian vacation with this brief video showing a handful of Hawaii wildlife such as the Green Sea Turtles, Hawaiian Monk Seal, Galapagos Shark, Reef Fish and Frigate Bird. The background music is the sound of Hawaiian Honeycreepers from the Ohia Forest on the Big Island of Hawaii.

And on the more formal side, geography explains the wildlife paradise called Hawaii. As school students learn, it’s an remote island chain formed by volcanic activity.

The closest land mass is almost two thousand and five hundred miles away (US West Coast). For wildlife, getting there means flying, swimming or hitching a ride with humans.

Polynesians, the first human inhabitants of the islands arrived over one thousand years ago and they brought domestic animals such as pigs and chickens for food sources. Additional wildlife such as rats and geckos also hitched rides. 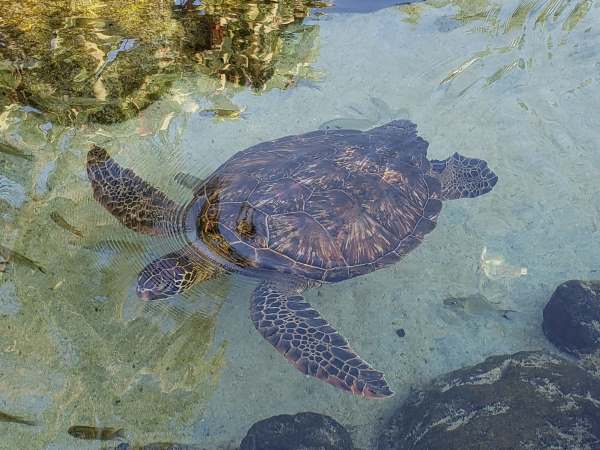 Along the way, other settlers, including westerners introduced most of what today is called Hawaii wildlife. The amphibian and reptile population of Hawaii is a very good example.

Hawaii often gets characterized as a land with no native snakes. That statement needs a bit more clarity. Because the Yellow-bellied sea snake swims in the waters around the islands, technically it’s a native snake. The good news is that this poisonous snake is rarely seen along the tourist beaches so there is no need for worry.

Hawaii also has an introduced Blind Snake. They are very small, worm like snakes that burrow in gardens and flower pots. They cause no harm and therefore are not an ecosystem concern.

Recently Hawaii has stepped up the proactive measures to protect the island from the introduction of Brown Tree snakes by training dogs to detect them at ports and in the wild. 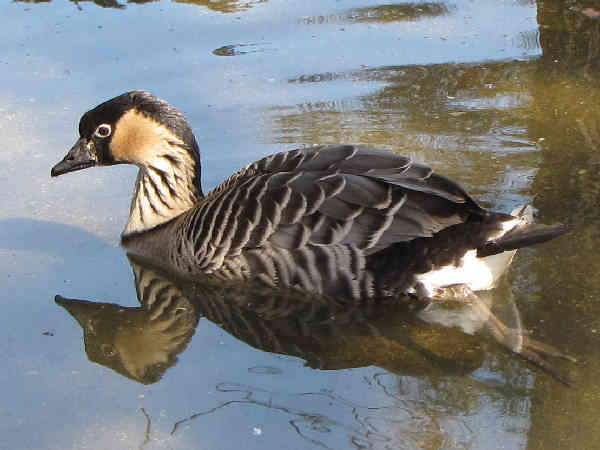 Because of their ability to fly, birds have been able to settle in the islands almost since the time the islands have been formed. The picture shows a Nene Goose, the official bird of the state.

The Bishop Museum follows the American Ornithologists Union checklist of Hawaii birds and lists three hundred and thirty eight species. Some of them are familiar sounding North American birds like the Redhead Duck and Barn Swallow. Others are unfamiliar Sea Birds or endemic birds such as the Hawaiian Duck, Hawaiian Hawk, Hawaiian Owl and Honeycreepers. Thirty-three of Hawaii’s forty four endemic birds are listed as endangered.

So, birding is one of the great Hawaii wildlife adventures on tourists to do lists. According to the Audubon Society

Hawaii holds the dubious distinction as the endangered species capital of the world. Twenty-one of the 25 birds that have gone extinct in the United States are from Hawaii. More than one-third of all U.S. birds protected by the Endangered Species Act reside in Hawaii

Nine National Wildlife Refuges on four of the large islands are a great way to see many of the native bird species. For tourists interested in an even more exciting birding adventure, consider, the Palmyra Atoll National Wildlife Refuge, located south of the islands. It’s a breeding ground for many of the Pacific seabirds, including Boobys, Frigatebirds, Noddys and more. 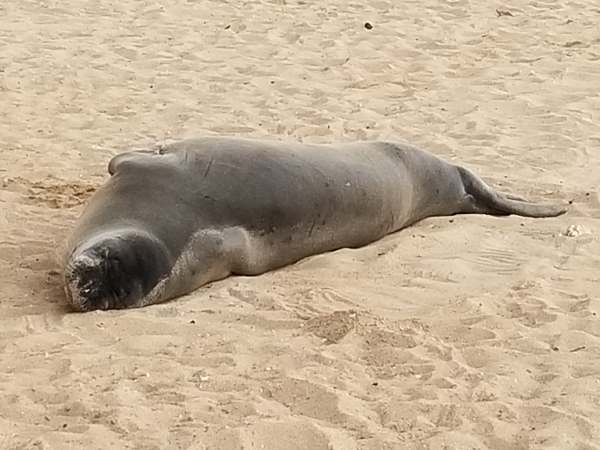 Because of their ability to swim, Hawaii is surrounded by all types of ocean animals, including about eighteen marine mammal species. The Hawaiian Monk Seal, an endangered species is only found in Hawaii.

Whales are always a big draw and Humpback Whale watching is one of the tourist must see activities during the winter months when the whales move from their Alaskan summer grounds to the warmer Pacific waters.

Snorkeling is probably the best way to get up and personal with the native ocean animals. Guides covering the local fish are available in all the snorkeling and diving shops.

Hawaii ocean animals might be safe for the future due to the Papahānaumokuākea Marine National Monument. It is advertised as the “largest contiguous fully protected conservation area under the U.S. flag, and one of the largest marine conservation areas in the world.”

As the site grows, more information covering Hawaii will be added. Until then, press any of the following buttons to learn more about Hawaii nature.