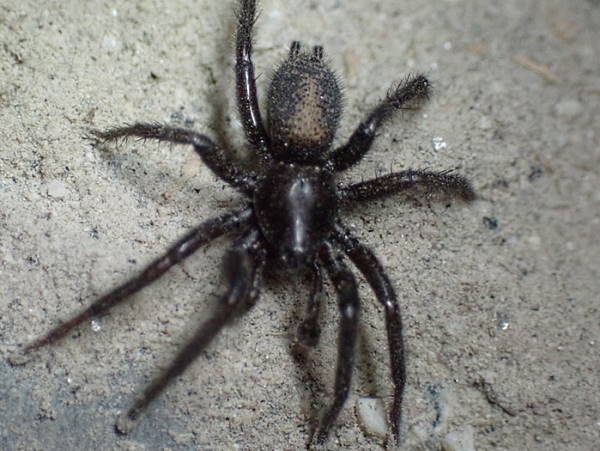 Welcome to the ground spiders portion of the larger spider identification guide. Please press or click the green Spiders button for additional information.

Ground spiders come in a variety of families, shapes and colors. Three families

use the common name for all or some of their current genera and species. With a high total number of species it’s a safe bet that many individual species can be found close to the ground in residential areas around the United States.

All three families also get classified as hunting spiders cable of traveling to above ground spaces. In some instances, ground spiders can make their way indoors. None are considered spiders of medical importance, so an incidental bite presents little harm to all but the spider bite sensitive population. Additionally, species tend to be small, with the largest species growing between one-quarter to one-half inch in length.

Ground spiders in the family Gnaphosidae make the top ten list of most species category. In the United States the number of species can double as you move from northern to southern states. For example, the most recent spider survey of Maine documented forty different species. Recent research from Virginia assumed 60 species present in the state. (Hoffman. Richard L. Banisteria Number 33, pages 18-29. 2009). The presence of spinnerets at the bottom of the abdomen is probably the best physical clue to help with family identification.

Ground spiders are sometimes difficult to find. They hide under rocks and logs during the day and hunt primarily at night. Most of the species are dark-colored with relatively long legs. Even the groups (genera) are difficult for non-specialists to identify. 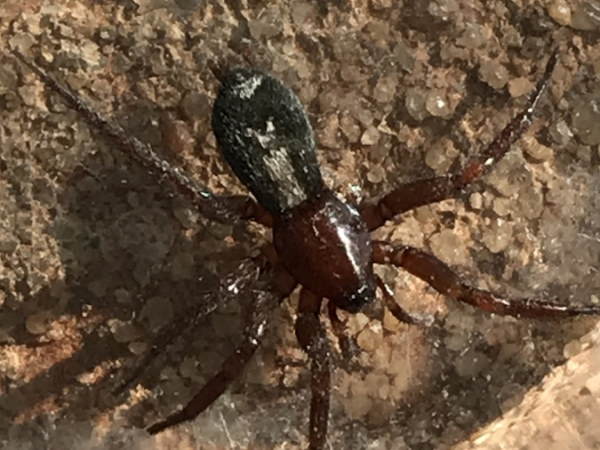 One species, the Parson Spider, is common in houses, and adults of this species may be found at any time of the year. The picture shows an Eastern Parson’s spider. 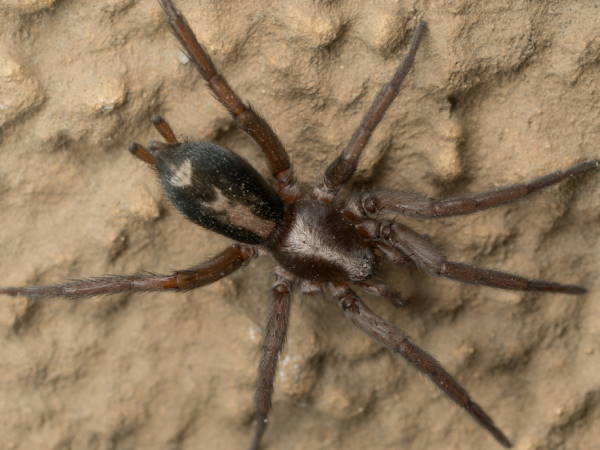 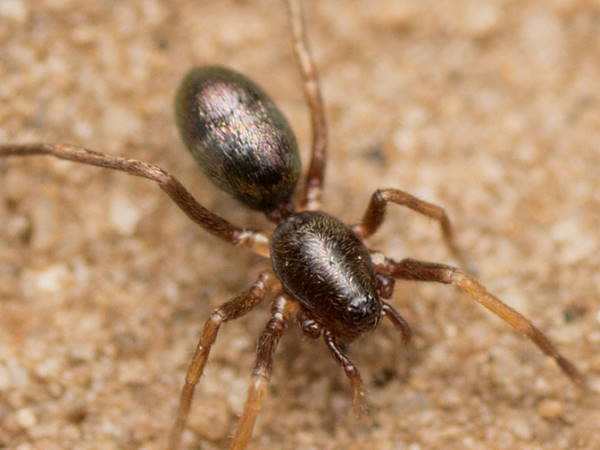 Two genera with the largest number of species, Micaria and Segiolus, resemble the appearance and behavior of ants. Ant mimics are fairly common in the insect world because of their defensive advantages. Generally, ants have few predators. Species from both genera can be found from coast to coast. Because they prefer a dry, hot habitat, their season expands as one moves from north to south. The picture shows a Micaria species. 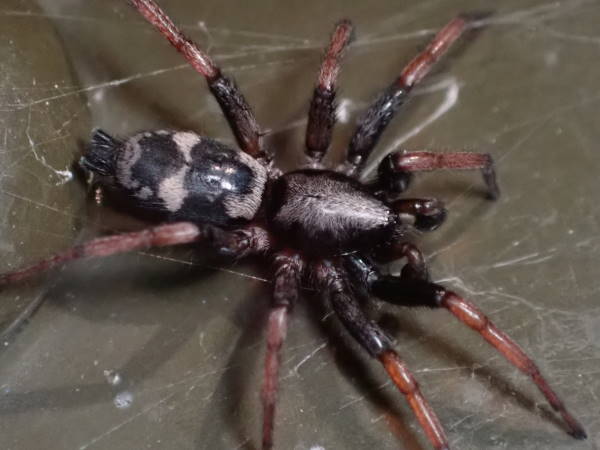 Segiolus species, like the one in the picture, can also resemble ants. Along with the Parson’s Spider, they also can wander into households and do not present any danger. They rarely grow larger than one quarter of an inch in length. The Variegated spider (Sergiolus capulatus), ranks as one of the most common Eastern ground spiders. 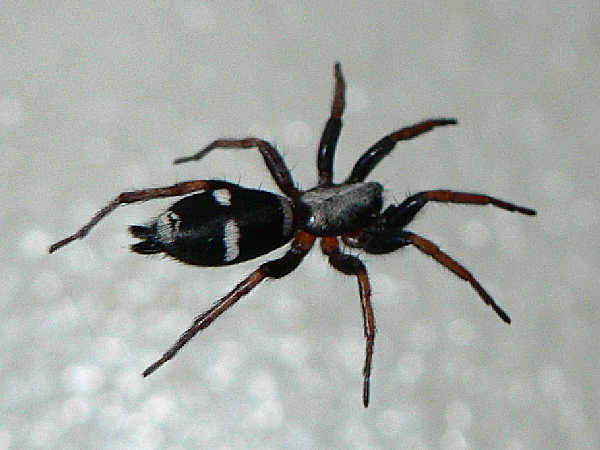 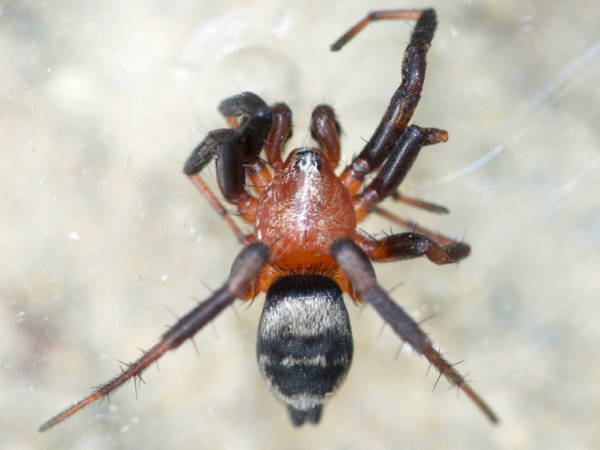 Ranges for additional ground spider genera with smaller number of species can vary. Callilepis species might not be as widespread as Micaria and Sergiolus species, however, their range does expand through most of the United States. The picture shows Callilepis plutof , a species fairly wide spread in northern half of the United States, although never seen in large numbers. 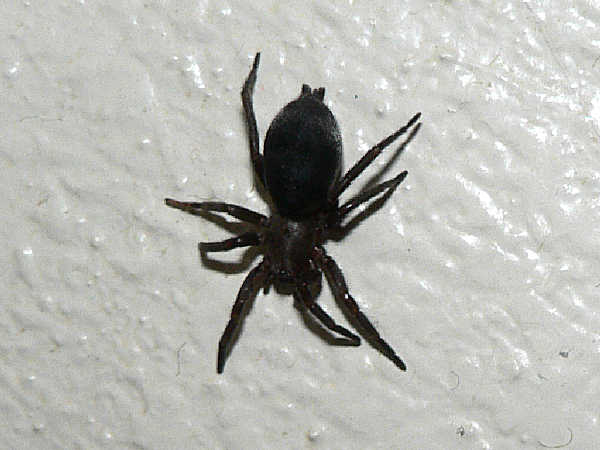 West Coast residents can often find a Mouse Spider (Scotophaeus blackwalli) crawling on a wall. They are a bit larger than the more wide ranging ground spider species, and they are also European imports that found their niche in West Coast homes. 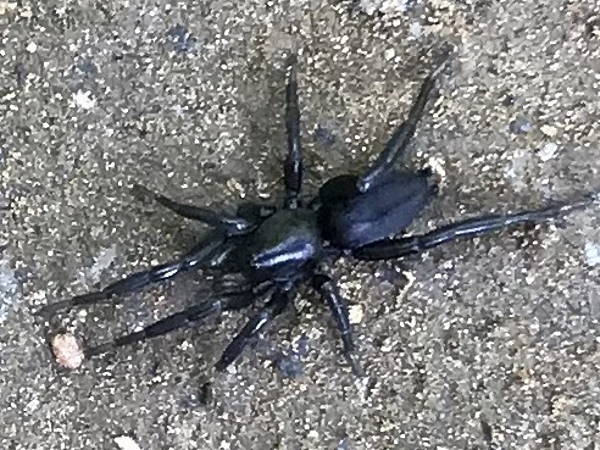 Sometimes they can be found, but difficult to identify to even the genera. This looks to be your basic, black bodied ground spider 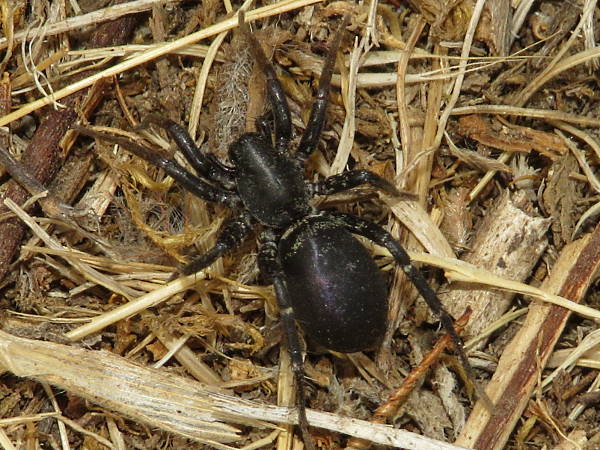 Corinnidae, better known as Antmimics and Ground Sac Spiders, add diversity, along with some possible complexity to this ground spider discussion. Like the Gnaphosidae, the family consists of both ground spiders and antmimics, although in much smaller numbers.

With the exception of the Castianeira genus, the remaining genera have both a small number of species and limited range. The picture shows a typical member of the Castianeria, a plain black body with some white pattern showing.

Notice the the lack of spinnerets extending on the bottom of the abdomen, all Ground Sac Spiders can initially be differentiated from the ground spiders in the family Gnaphosidae, by this physical trait.

The name Sac spiders might also bring some confusion because it applies to three separate spider families that once formed a single larger spider family. They are all hunting spiders with their sac serving as their sleeping bag. None of the ground sac spiders gets classified as spiders of medical importance. however, it might be easy to confuse the name with the yellow sac spider, a species know to have a big bite.

Previously the Clubionidae was a large, diverse family known as the sac spiders, referring to the silken tubular retreats that they typically make in rolled-up leaves, in other ground litter, and under bark and stones. This family has been divided into many smaller families, of which only members of the genus Cheiracanthium… are typically involved in envenomations. Although bites can be painful like a bee sting, most result in cases of minor medical importance 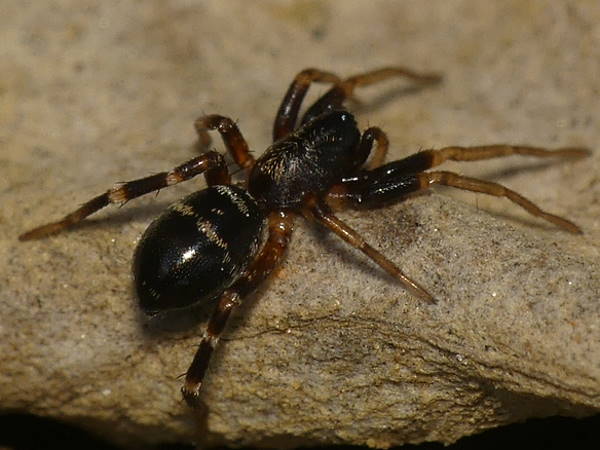 Experts will acknowledge that differentiating between ant mimics in the Corinnidae and Gnaphosidae families is problematic without a microscopic examination of the specimens. They come in in varying shades of black or black and red coloration, as shown in the picture. 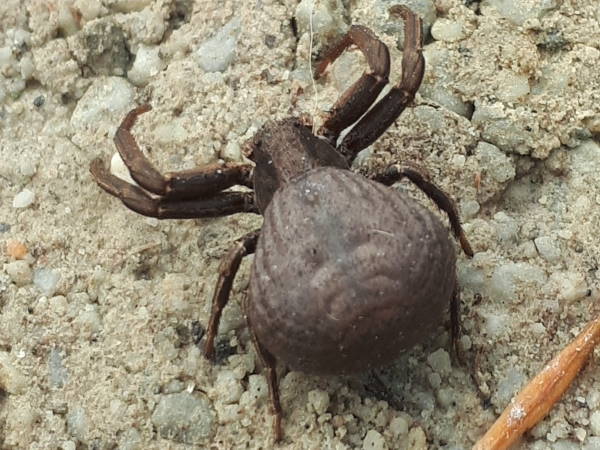 Ground Crab Spiders, represents one half of the Thomisidae crab spider family, better known for the more colorful flower crab spiders in the family. The Crab Spider section provides additional information for interested readers. For identification purposes, their size is similar to other ground spiders, making a good macro picture the best first identification clue. It’s fairly easy to use their physical traits such as a rounded abdomen and leg positions to initially differentiate them from the Corinnidae and Gnaphosidae ground spiders.

Differentiate between ground crab spider species is not quite as easy. Cull shades of brown with indistinct markings characterizes the majority of species. Experts often suggest using physical characteristics such as leg hairs and body shape as more definitive identification clues than body color and patterns. Most residential areas host a few different species. 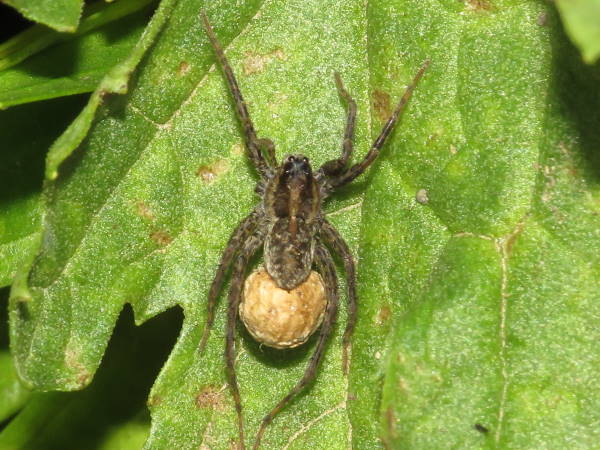 A variety of spider species without the common name ground spider share their territory. Most residential areas in the United States, for example, host some small in size wolf spiders that can be seen running among the leaf litter with the other ground spiders. The wolf spider in the picture is carrying an egg sac, a great field identification clue.