The warm Georgia climate translates into many common backyard birds. Almost all of the Georgia woodpeckers fit that category.

The state’s woodpecker population consists of eight different species covering all five woodpecker genera. Woodpecker enthusiasts know that Georgia use to host the Ivory-billed Woodpecker, North America’s largest species. However, those same enthusiasts don’t maintain any enthusiasm that the birds will ever be found in the state again.

They also hope that only woodpecker species on the Endangered Species List, the Red-cockaded Woodpecker, does not follow the same route as the Ivory-billed Woodpecker.

The remaining seven woodpecker species can be found throughout the state, including large metropolitan areas such as Atlanta.

Georgia’s only true migratory woodpecker, the Yellow-bellied Sapsucker, breeds across Canada from Coast to Coast. Look for it during the winter because like many bird species it flies south during the colder weather.

Males have a red crown and throat. Females only have a red crown. It’s very easy to identify in its East Coast territories. They are not known to be common backyard feeder birds, only occasional.

Popular birds, they are welcome at many back yard feeders and especially enjoy a snack of suet and water. The top picture shows one at the feeder. With a life that often exceeds the five year mark, homeowners might expect a long term relationship with any flickers they might attract to the back yard feeder.

Pileated Woodpeckers are habitat adaptable. They prefer mature forests with trees large enough for their nesting and cavity building activity.

Most areas of Georgia fit that description and the bird’s range extends across the eentire state. 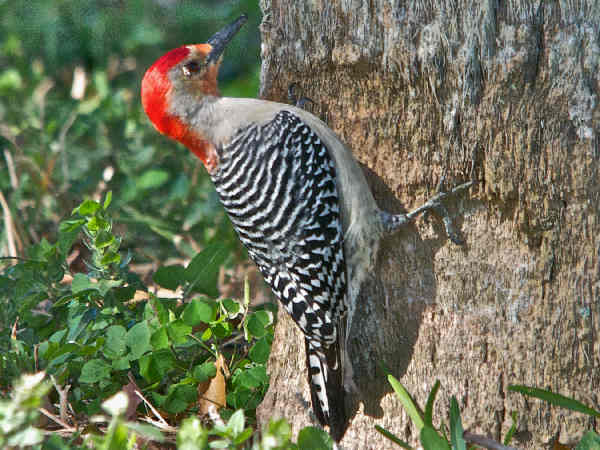 Red-bellied woodpeckers abound in Georgia. They are larger than average birds with an outgoing personality. They easily adapt to backyard feeders and their loud vocalizations can often be heard through the neighborhood.

As the picture shows, the name red-bellied can be a bit misleading because the stomach feathers have barely a hint of red to them. The back and top of the male’s head is red. The female’s head is buffy and the nape is red.

Red-headed woodpeckers also inhabit most of Georgia. While population declines have been noticed in their northern most range, they are still fairly abundant in the state.

It’s not difficult to recognize one. The striking red feathers on the head are a real eye catcher.

Georgia woodpeckers also include the very common Downy Woodpecker. It likes backyard feeders in all parts of the state. Put up some suet, and there’s a high probability the Downy will be there.

Everything that is written about the Downy Woodpecker applies to the Hairy Woodpecker with few caveats. The picture highlights the most important caveat, they have a larger bill than the Downy. Otherwise, the black and white striped face, white belly and back feathers look very similar. Males also have a red crown.