The fly pictures and video presented here cover many of the flies common in back yard gardens and residential areas around the United States. Readers unfamiliar with formal fly identification guideline need not worry because as a group, the physical appearance of the fly, including body shapes, colors and overall patterns are sufficient for identification purposes. There’s little need for microscopic examination of body parts. With a little bit of observation and practice, it’s not unusual to become familiar with up to fifty different fly species in the neighborhood.

Here’s a group of flies that fit the category. The link to page one of the flies section provides additional identification help. 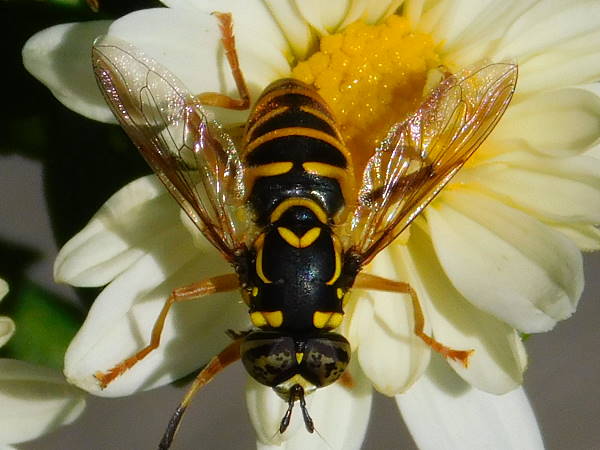 Wasp and bee mimics abound in the fly world because of the protection provided to species from predators that shy away from the more formidable insects they mimic. The video at the top of the page shows a member of the Tachinid flies family (genus Cylindromyia). Red and black abdomens are a common look for many wasp species.

As mentioned in Page 1 of flies, many Hover flies also fit into the wasp and bee mimic category. The picture at the top of this section shows a member of the fly genera Spilomyia. They can be found in gardens around the United States and may be overlooked because as the picture shows, they look like wasps. A closer inspection shows the multicolor eyes that can also be found on horseflies. The “V” on the thorax serves as another good identification clue. 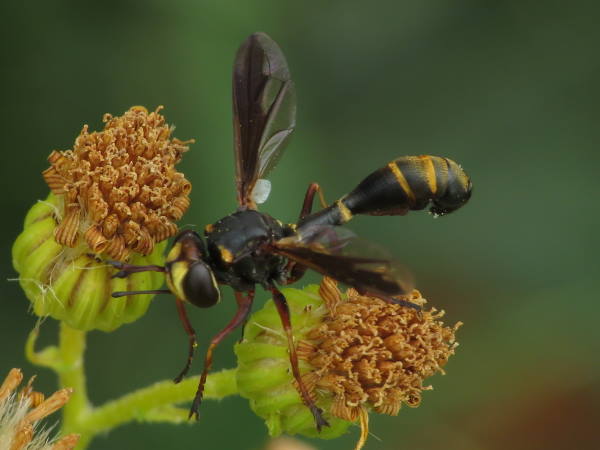 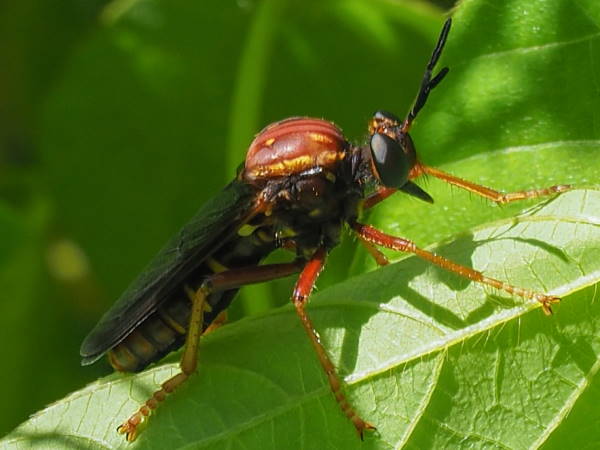 Some of the members of the Robber fly family also take the name wasp mimics. The picture shows a member of the Ceraturgus genus. The thin abdomen and longer antenna are physical characteristic common to wasps. 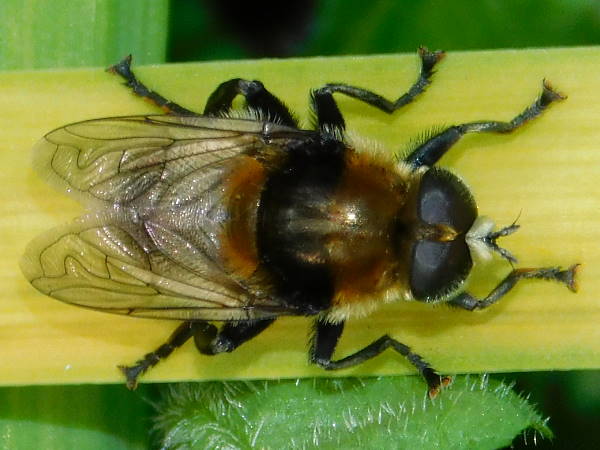 Bee mimics also abound in the fly family. Some species have a very wide range. The Narcissus Bulb fly fits the bill and also belongs to the larger Hover Fly family. Their physical look can vary. Generally, like the picture shows, they do resemble a bumblebee. Contrary to the name, a few plants, along with the daffodil, serve as larval hosts. Because of the popularity of the plant larval hosts as garden plants, they also make their homes in residential areas around the country. 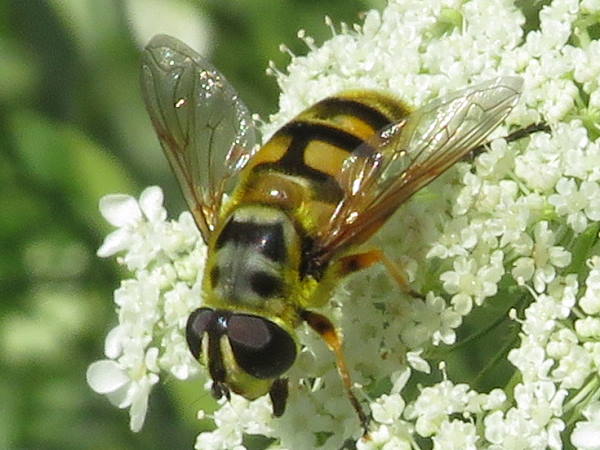 The range for some species can also be regional. The above average size of Myathropa floream, pictured, makes it a stand out fly in West Coast gardens. Along with the size, the bright yellow hairs provide it with a typical bee mimic appearance. 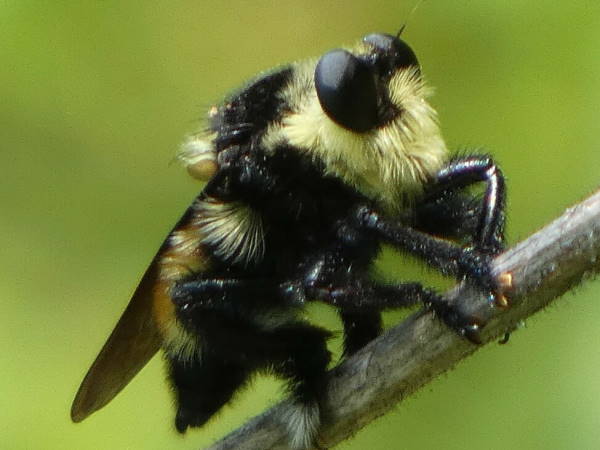 The Southern Bee Killer, another member of the Robber fly family, is well known in the Southeast. 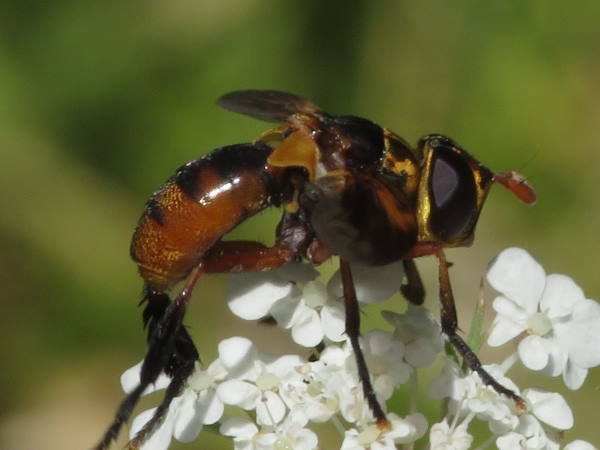 Another easy to identify group are the feather-legged flies. They fit into the larger Tachinid flies family and the picture shows a specimen with feather like hairs on the leg.

Consider them one of the beneficial species in the fly family. For example, according to Bugguide, “T. pennipes, has been used to control of stink and squash bugs. In fact all of the species use members of the true bugs family as larval hosts. Look for them in gardens across the country that grow members of the squash family. 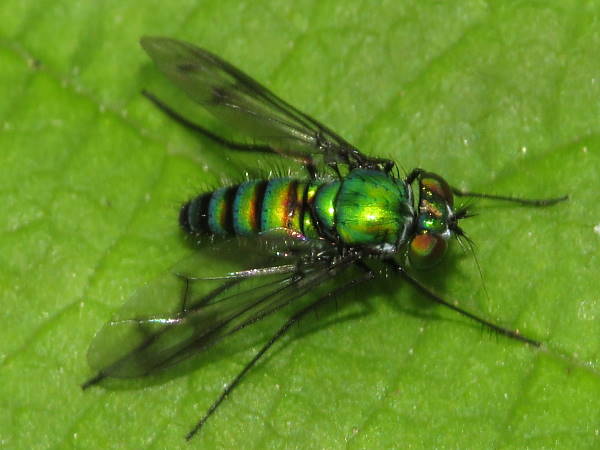 Long-legged flies also fit into the beneficial insect category. With well over one thousand species identified in the United States, odds are good they can be found in the neighborhood. The picture does on provide a baseline for size. They tend to be on the smaller side with variable metallic body colors. Having a knack for fly physical characteristics makes the longer than average legs stand out.

Many use spider mites as larval hosts making them natural pest control agents for the garden. 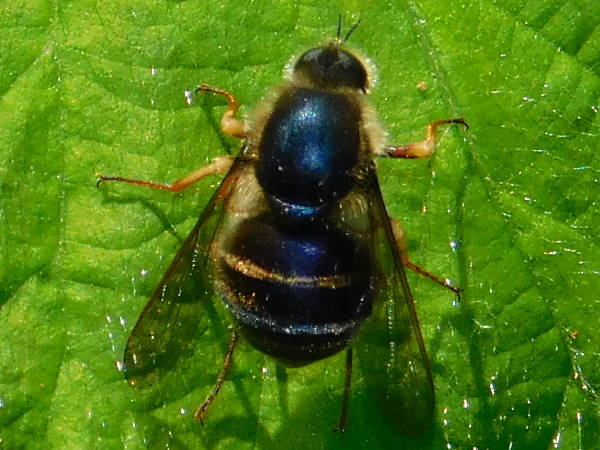 If you find a fly and say, that fly sure does look like its head is small, take a guess it belongs to the Family Acroceridae, with the common name. Small-headed flies. Their larvae feed on spiders, and that fact also makes them a good candidate to be seen the in garden. 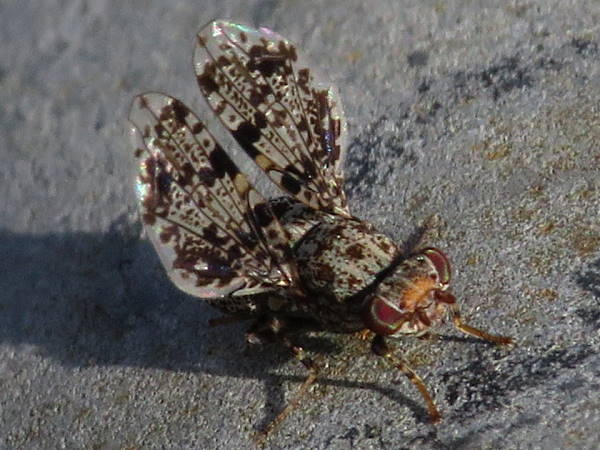 While not as common in gardens as the other flies pictured here, the Peacock fly also ranks as an easy to identify fly. It literally walks around with its wings up, strutting like a peacock.