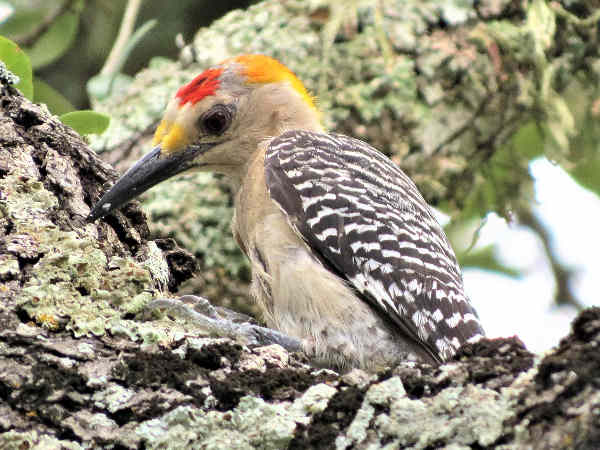 Florida Woodpeckers don’t particularly stand out in the Florida bird world. The state’s beaches provide the perfect territory for the water birds and shorebirds that make the most impression on the tourist population.

Resident Florida birding enthusiasts might ask, have you seen the woodpecker pictured at the top of the page?

It’s called a Golden-fronted Woodpecker, and it’s range is limited to Texas and Oklahoma. On rare occasions, it makes a stop in the state and creates some excitement. On other occasions, a few species might be misidentified. For example, in the summer 1986 edition of American Birds, the article, Female Golden-fronted Woodpecker or mutant female Red-bellied Woodpeck noted a small rash of misidentified species in South Carolina. The author claimed,

With the exception of the tail, the plumage patterns of the female Redbellied and Golden-fronted woodpeckers are similar. Obviously, the tail pattern is often overlooked as an important field mark.

Here’s a brief run down of the states eight additional species that span all five native woodpecker genera.

Picoides are the most diverse woodpecker genera in the United States with nine species. Florida counts three of them as native breeding species including the Downy Woodpecker. It’s the smallest and most common Picoides and it’s found in neighborhoods up and down the peninsula. It also adapts equally well to more wilderness areas and parks. If there’s a tree, there’s the possibility of a Downy woodpecker.

Physically, the Downy’s black and white feather pattern resembles the slightly larger Hairy Woodpecker. Males have a red crown on the head, females, like the one pictured at the top of the page, do not.

In instances where size comparisons might not be available, experts suggest examining the bill size in relation to the head size. Downy Woodpeckers typically have small bills.

Everything written in the previous section applies to the Hairy Woodpecker with few caveats. The picture highlights the most important caveat, they have a larger bill than the Downy. Otherwise, the black and white striped face, white belly and back feathers look very similar. Males also have a red crown.

The Red-cockaded woodpecker moves the conversation from some of the most common Florida woodpeckers to the least common. In fact, it’s the only woodpecker species on the Endangered Species List.

Tourists can see the bird at a variety of parks where the habitat is protected. Here are three examples.

Red-bellied woodpeckers are the second of the two wide-spread Melanerpes woodpeckers. They are larger than average birds with an outgoing personality. They easily adapt to backyard feeders and their loud vocalizations can often be heard through the neighborhood.

Red-headed woodpeckers rank as the most wide spread of the Melanerpes species, with a presence in almost every state from the Rocky Mountains and destinations east.

It’s physical appearance translates into easy identification. The head, covered in red feathers, along with a white stomach stands out in a crowded woodpecker field. Both males and females share this feature. Juveniles have brown feathers on the head for their first year.

Florida hosts the Yellow-shafted Northern Flicker. The color designation refers to the under the wing color of their tail and wing feathers.

Pileated Woodpeckers are habitat adaptable. That fact partially explains their range. According to the Florida Fish and Wildlife Commission,

Tourists to the Sunshine state can keep their eyes peeled to the trees for a look at this wonderful bird.