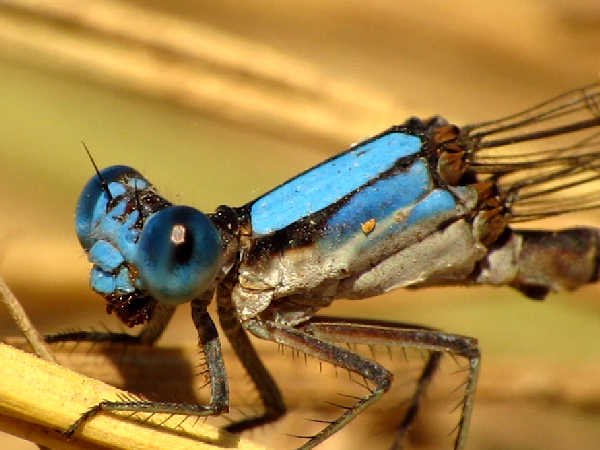 Close to two dozen Argia damselfly species inhabit slow moving water areas in North America. The common name dancer refers to the lightness of their flight. They are one of the three most common types of damselflies found in the United States.

Beginning damselfly identification often points out that the way to at least categorize a damselfly in the field as a dancer species is to first look at the wings. While in a closed position, they are often set above the abdomen.

While blue represents the predominant male body color, the half dozen species presented below highlight an even more colorful Argia world.

A mostly blue thorax along with blue coloration for the final three abdominal segments, are the characteristic identifying tips for the male Blue-fronted Dancer (Argia apicalis), top picture.

This is a common species in slow water areas east of the Rocky Mountains. 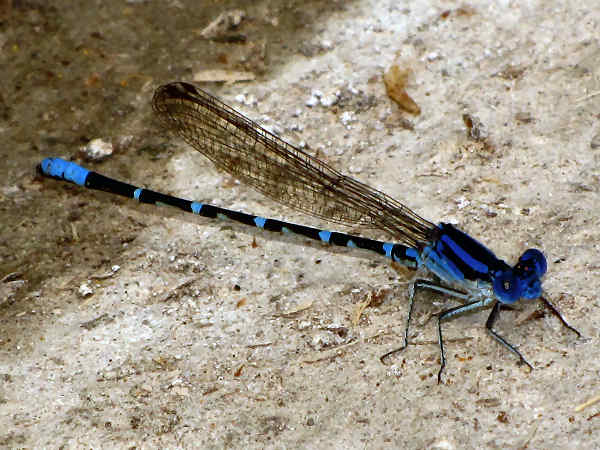 Blue-ringed Dancers (Argia sedula) inhabit many different water areas, especially in the southern half of the United States.

Because of their extended range, they can be found flying, or in many cases, perching in the sun near a water source, from April through October.

The extra-blue eyes and top thoracic stripe (compared to the side thoracic stripes), along with the thin, light circles on the dark abdomen are useful field identification clues. 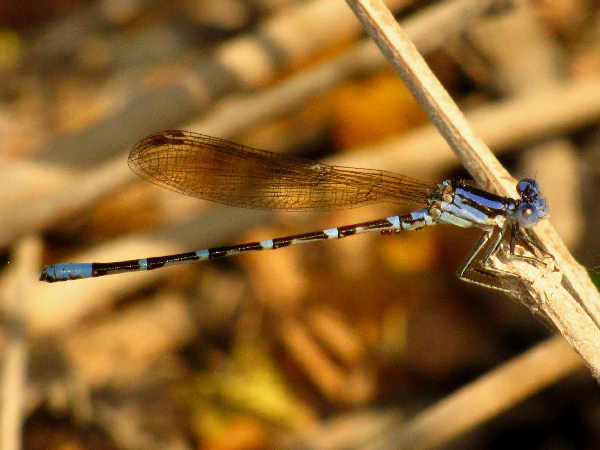 Finding one in the United States may prove to be a more difficult task than identifying one. They are a regional Argia species, with a range that extends from Northern Mexico to South Texas along the Lower Rio Grande Valley.

Within their range, they are quite plentiful, and can be found near slow moving streams. 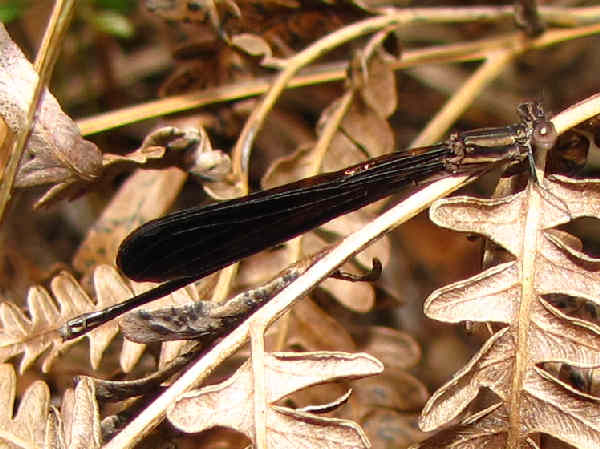 While body color can vary from subspecies to subspecies, most of the males are violet, with blue an alternative color. Most of the females have brown bodies.

Wing color tends to get darker in the southern half of its range, with the darkest winged species, the Black Dancer, found almost exclusively in Florida. 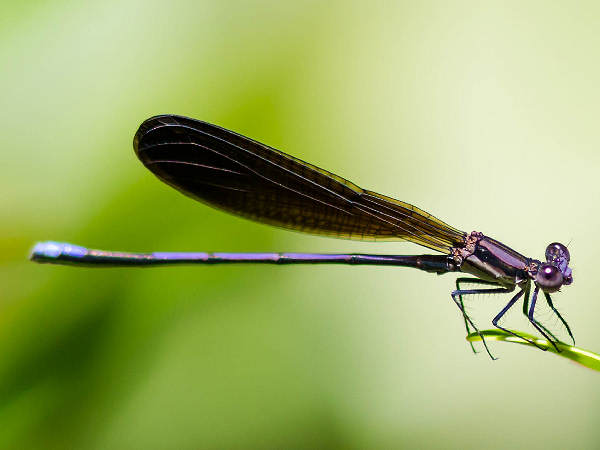 The first picture in the series shows a species with a brownish body and almost black wings, making the tentative identification a female Black Dancer (Argia fumipennis atra). The second picture shows the Violet Dancer. 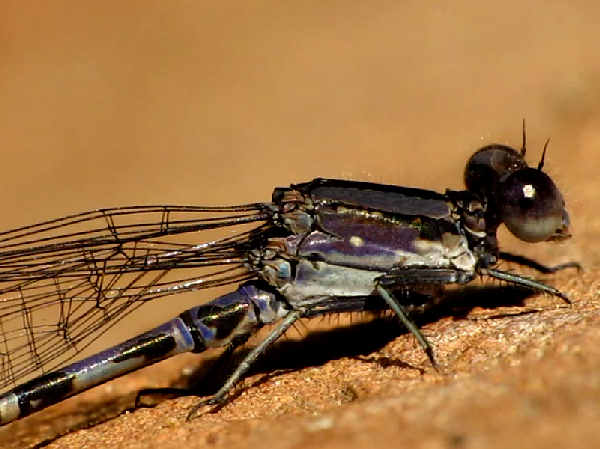 A few of the dancers have purple bodies, including the Kiowa Dancer. 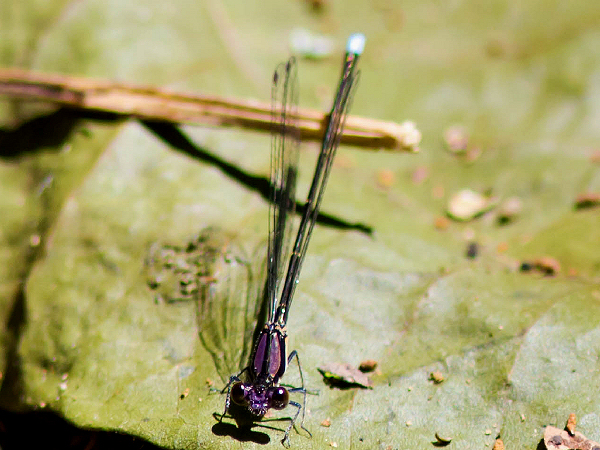 The Blue-tipped Dancer is yet another variation on the theme of purple colored dancer damselflies. It has a purple throax and a blue color tip at the end of the abdomen. 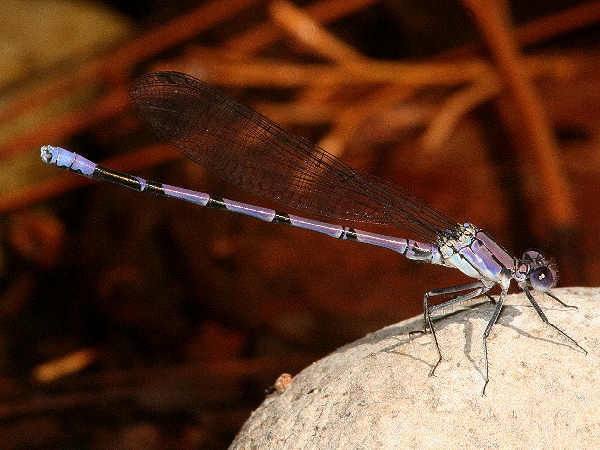 The Tonto Dancer, yet another of the purple dancers, is an Arizona specialty. 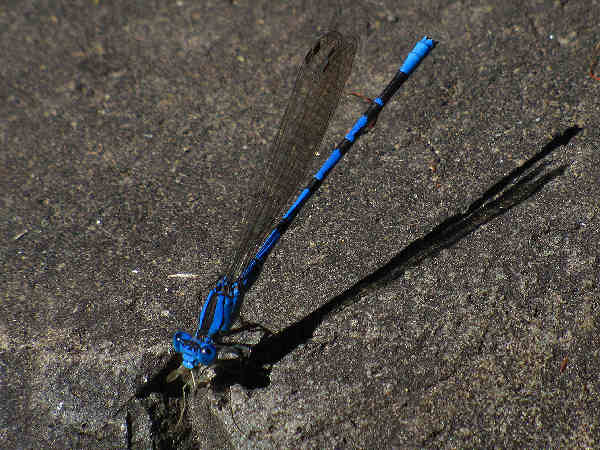 Moving from the purple to the blue bodied dancer, nothing says blue dancer damselfly like the Vivid Dancer (Argia vivida). It’s the official state insect of Nevada, and it is also the most common Argia species along western forested areas near streams or rivers.

The name vivid describes the very blue color of the males. Along with color, the triangular pattern on the side of the abdomen serves as the best field identification clue for the species. It is also present on the less colorful females. 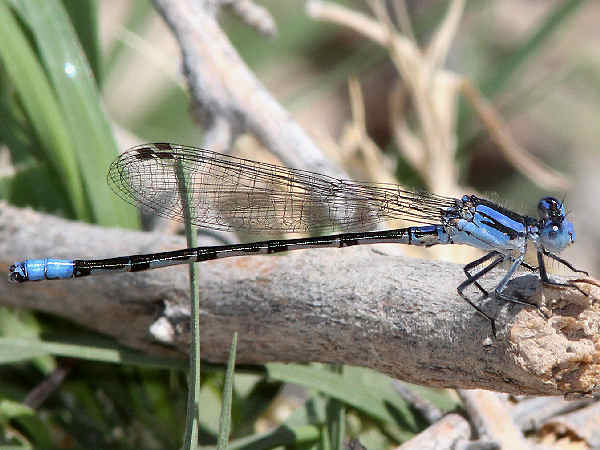 Paiute Dancers are fairly common in the Midwest and Western United States. 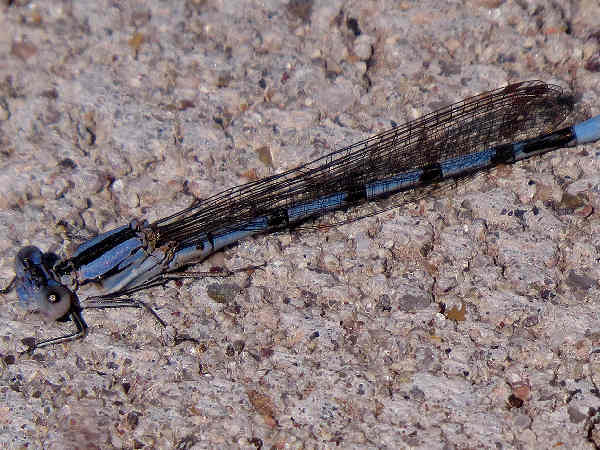 Aztec Dancers (Argia nahuana) are a Southwest species. They look almost similar to a California Dancer. Generally when their territories overlap in areas of California, the Aztec Dancer looks to have a more pale blue body.