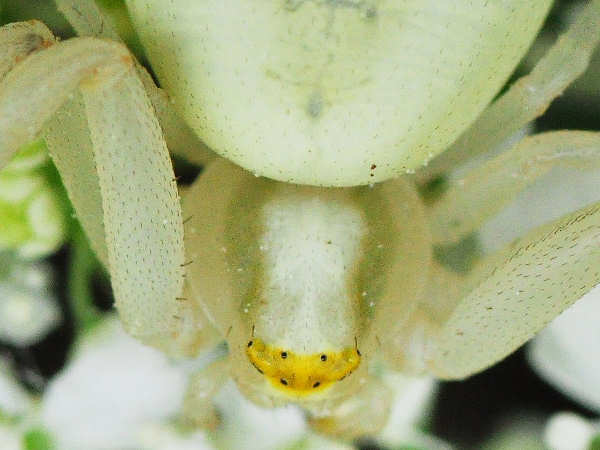 The common name crab spiders brings to mind an arachnid with a round body surrounded by four pairs of legs. It’s a physical description that mimics the look of a crab. That initial visual serves as a generally good descriptive starting point for three North American spider families that have crab spider as a common name.

Depending on the source, the family Thomisidae consists of around one hundred and thirty species, divided into at least ten genera. Because their range extends across the entire United States, species from four of the genera:

are highlighted in the first page of this crab spiders guide. Think of them as the colorful group of Thomisidae crab spiders. A close look around the garden often brings up least one of these spider species, often collectively called flower spiders. Page two of crab spider pictures covers the remaining, less colorful Thomisidae species along with the Philodromidae and Sparassidae crab spiders. The green Spiders button leads to the spiders home page.

Many individual flower crab spiders across the four families share a similar body color pattern, i.e., white or yellow bodies with red stripes or green stripes. Therefore, it’s important to note that crab spider identification for these four genera relies primarily on eye pattern and a few physical characteristics. Having a good macro lens for the camera is all it takes to start the identification process. 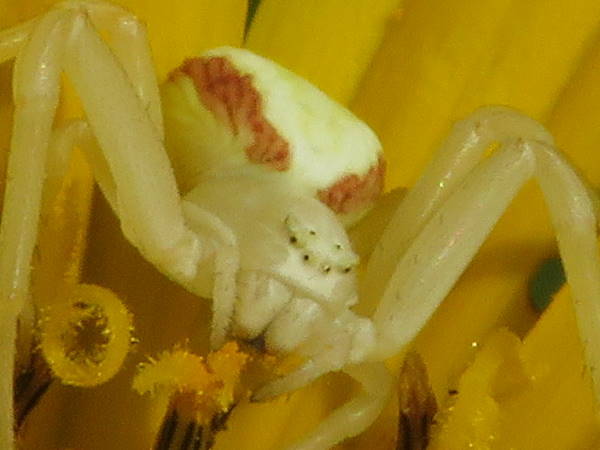 The name flower spider formally applies to the Goldenrod Crab Spider (Misumena vatia). Females are typically three times larger and consequently receive more noticed than the male. With the exception of the Southeast, they are common visitors to gardens around the United States.

The top picture highlights the spider’s eye characteristics. Normally when viewed from the front and top angle, all eight eyes will show up. The second picture shows a top down view of the entire spider body. Note the different colors between the two specimens. It’s the only species in the genus. 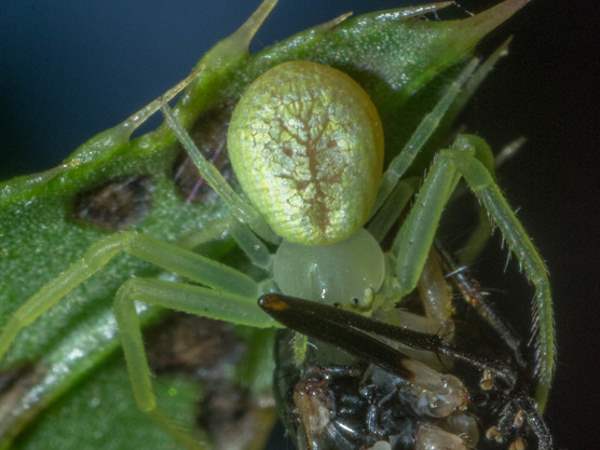 Green Crab Spiders are fairly common east of the Rocky Mountains. Females might grow to about one-quarter of an inch in length.

The genus has been recently revised, documenting seven different species, with five occurring in the United States. Misumessus oblongus, pictured, is also known for the more oblong shape of the abdomen. 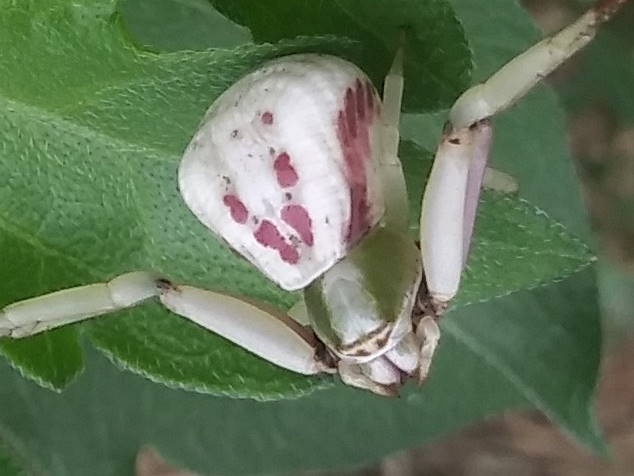 While eye patterns matter, the best initial field identification guide for the Whitebanded Crab Spider (Misumenoides formosipes) is to look below the eyes. Typically the presence of a white band, as shown in the picture, is clearly seen.

With the exception of most of New England, this is another common spider east of the Rocky Mountains. Because it is the only representative of the genus, there’s no confusion at the species level. 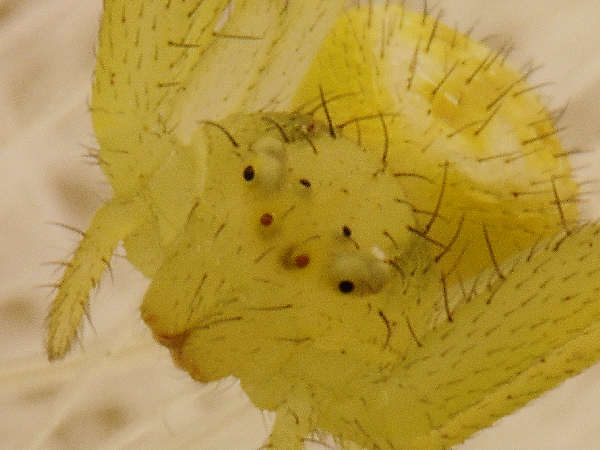 Mecaphesa go by the common name Hairy Crab Spiders. While over two dozen species have been documented in North America, the majority of species live in warmer climates. They somewhat resemble the white banded crab spiders, however their bodies are hairy. From a front and top picture of the spider, six eyes appear. 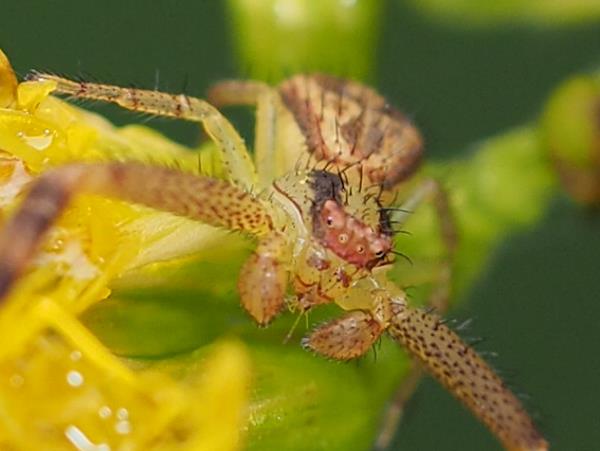 A hairy green body covered with distinct markings on face, cephalothorax and abdomen make it fairly easy to identify. 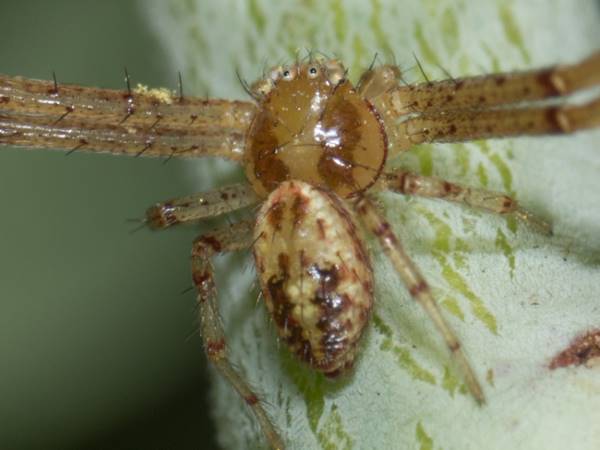 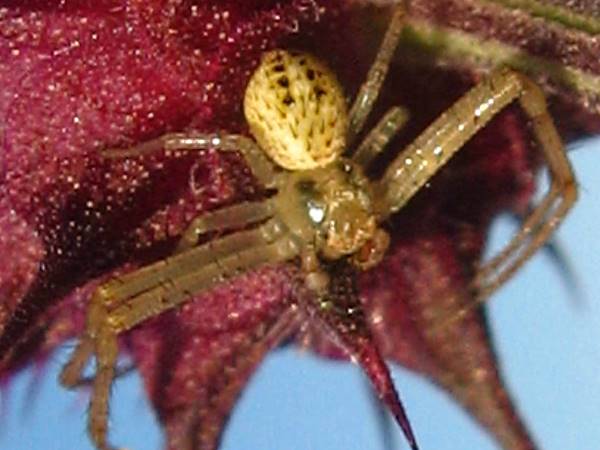 Rows of spots down the abdomen are good field ID clues for the Desert Crab Spider (Mecaphesa deserti). 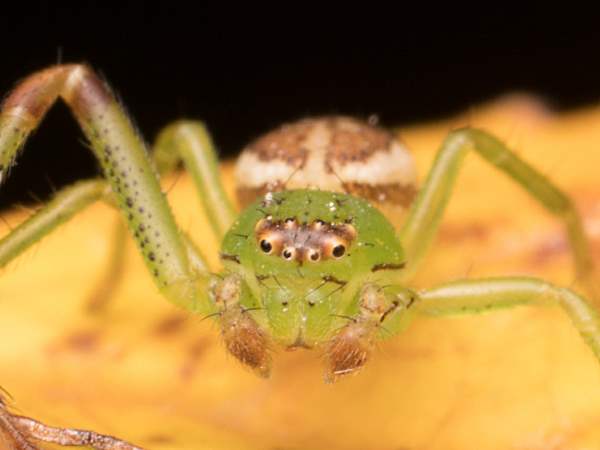