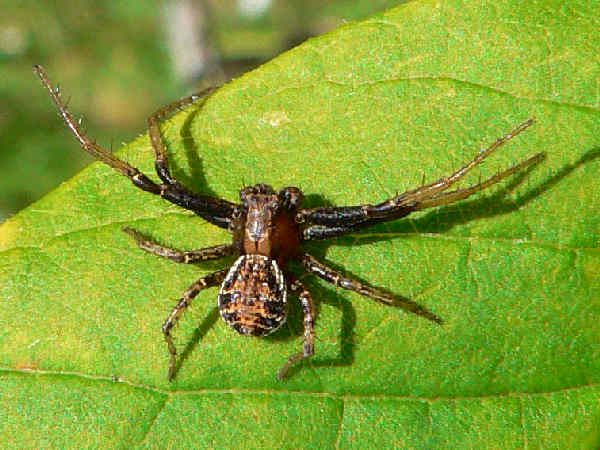 Starting with more members of the Thomisidae family, the best crab spider identification tip one might offer is, you’ll generally know them when you see them. It’s also important to note that a picture identification guide definitely needs to be supplemented with a physical examination of species from three different genera:

Both Bugguide and THE INSECTS AND ARACHNIDS OF CANADA PART 5 “The Crab Spiders of Canada and Alaska (Philodromidae and Thomisidae)” Charles D. Dondale and James H. Redner (1978) highlight the identification process. The Dondale and Redner book states,

“Representatives of Xysticus mainly resemble those of Coriarachne and Ozyptila in general structure and color. They lack the flattened body found in specimens of Coriarachne spp. and the modified femur and tibia of leg found in specimens of Ozyptila spp. Individuals of only a few species of Xysticus, such as X. nigromaculatus, possess clavate body setae, and none have the lateral eye tubercles obviously conjoined or the front greatly produced anteriorly.”

Xysticus species far outnumber the other species, so it’s not unreasonable to use it a a springboard to begin a picture identification The top picture shows a species in the genus Xysticus. 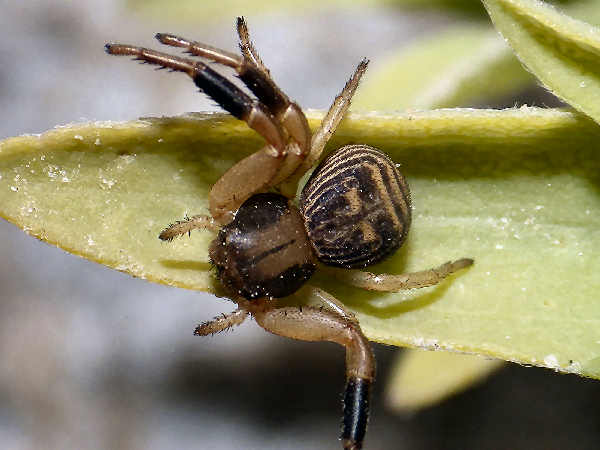 Here’s a slightly different body pattern for the Xysticus. It’s common in the Midwest and Texas. 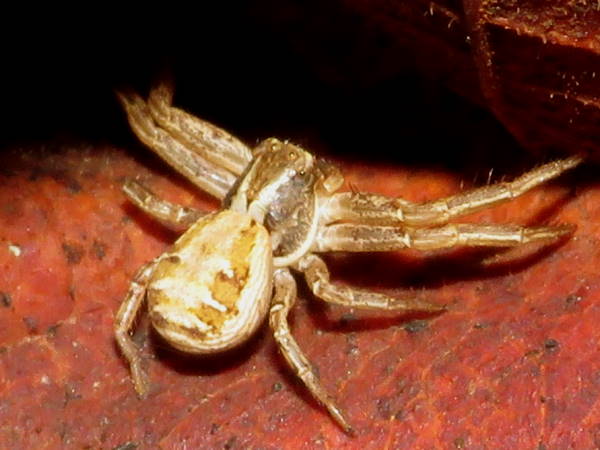 Finally, the small size an dull color of this unknown ground Crab Spider sitting on some leaf litter, demonstrates an additional identification problem If it’s a juvenile, the body color and pattern might change over time. 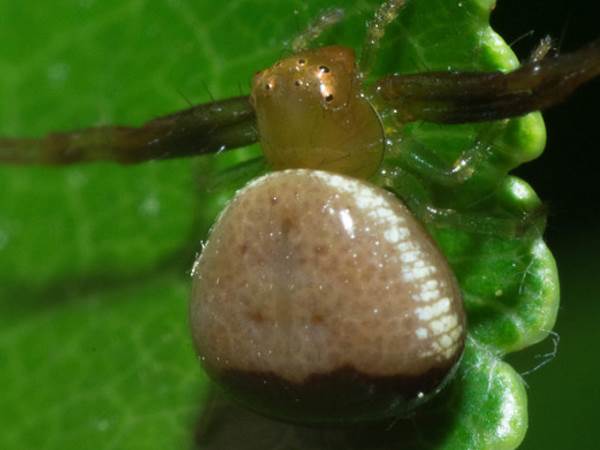 Synema parvulum another Thomisidae species fits the drab body pattern of the previous species. The distinct darkening of the end of the abdomen makes it an easy to Southeast and Mid-Atlantic species. 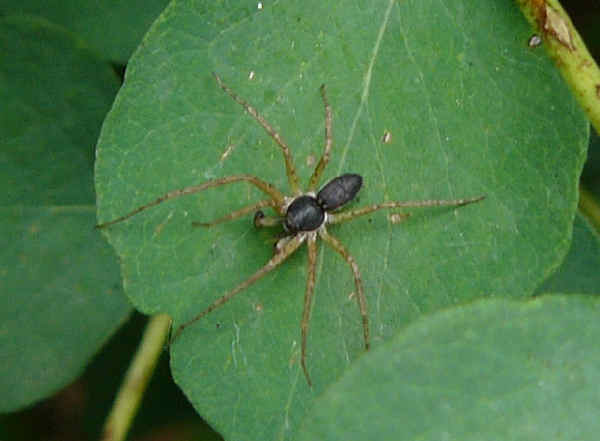 Running Crab spiders (family Philodromidae), the second family subsumed under the common crab spider name, could be considered the forgotten crab spiders. Leg size differentiates the families with the running crab spiders having longer second pair of legs. The size difference becomes readily apparent in either a real life or a picture comparison. Currently a little less than one hundred species have been documented in the United States, covering seven different genera.

In comparative terms, less color variation in running crab spiders correlates nicely with their need for less camouflage when hunting compared to the camouflage needs of flower spiders.

Apart from the physical difference, both Running Crab and Thomisidae spiders get placed in the hunting spiders category, albeit with different hunting strategies. Running crab spiders, more often than not, tend to chase prey while crab spiders (flower spiders), more often than not, tend to perch typically on flowers and leaves, and wait for prey. Of course there are variations to these general rules. It’s not impossible, for example, to find a running crab spider sitting on top of a flower.

Over one-half of the Running Crab spiders belongs to the genus Philodromus. There’s a couple of species in most areas. The picture shows Philodromus dispar, a West Coast species that was imported from Europe. Hardy species, they often overwinter, and can be found found sunning on a leaf from February through November. 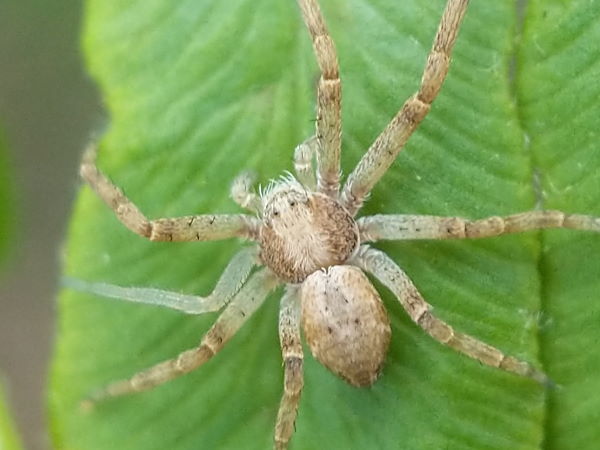 Many of the species have drab white to brown bodies, making identification a bit difficult. The picture shows a species with generally light body with brown markings. 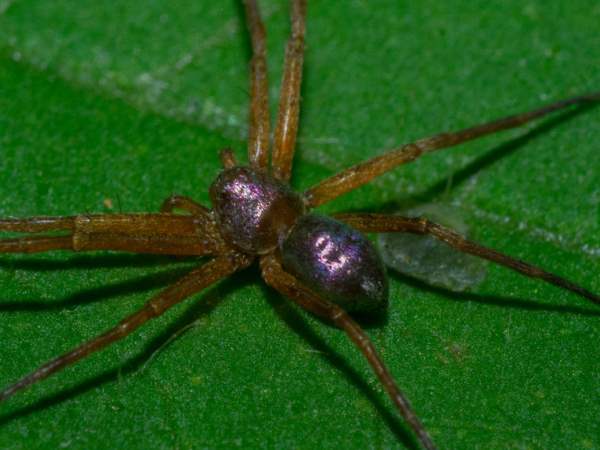 The Metallic Crab Spider (Philodromus marxi) might be the most common species in both the Mid-Atlantic and neighboring Midwest states. 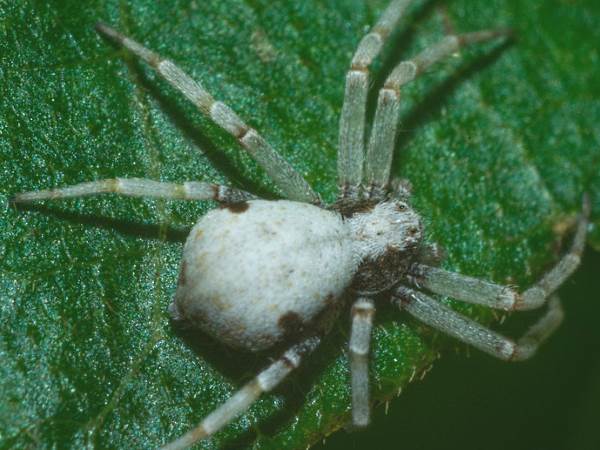 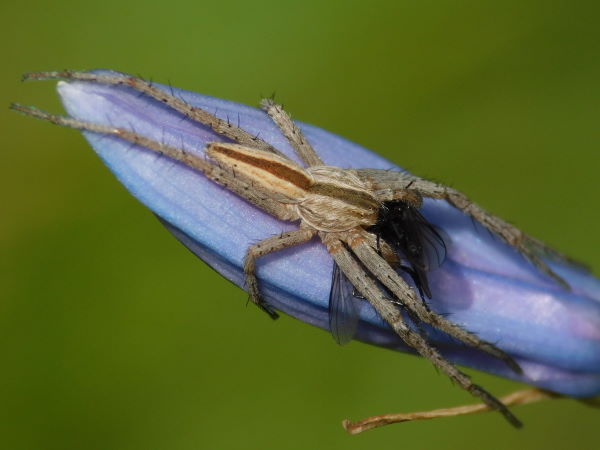 Species in the genus Tibellus go by the name Slender Crab Spiders. One particular species, Tibellus oblongus, has a range that extends across most of the United States. The long, thin body explains the slender part of the common name. They often bask on leaves or flower petals. 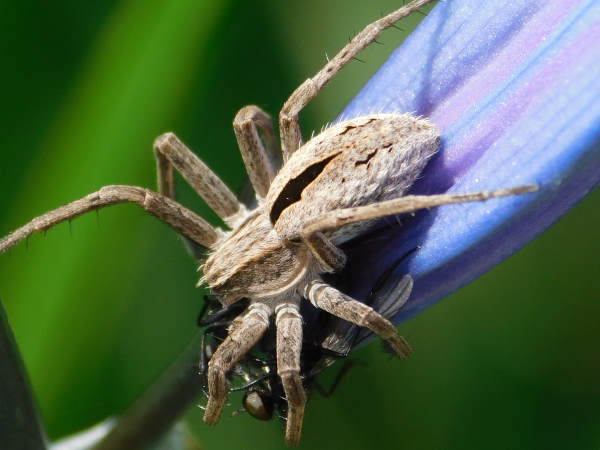 It looks appropriate to nickname the seven Thanatus crab spiders Diamond-backed spiers. Comparatively speaking, they grow to an above vis a vis the more colorful flower crab spiders. Look for them from early spring to late fall. 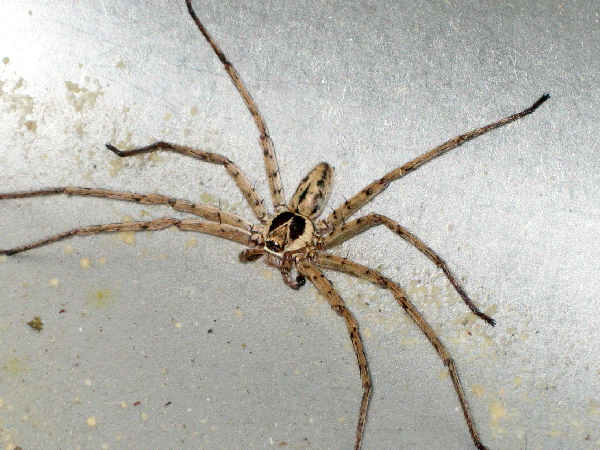 The name speaks for itself. Giant Crab Spiders, family Sparassidae, can grow up to four inches in length. A few introduced species inhabit the warmer areas of North America, including Florida and Hawaii.

They also go by the name huntsmen spiders, and their above average size along with their propensity to wander into residences and cars, often causes extreme bouts of anxiety to the average arachnophobe who crosses paths with it.

All spiders bite, including Sparassidae. However, they are not listed as a spider of medical concern.