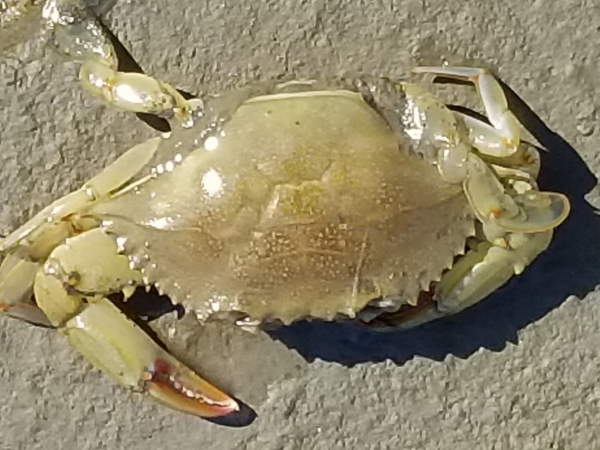 Ocean Animals
Most people’s familiarity with crabs extends from a typical beach vacation to the kitchen table. That knowledge barely scratches the surface of the world’s true crabs that currently count about seven thousand species in almost one hundred genera.

True crabs often get divided into geographically based species such as fresh water crabs, land crabs and marine crabs.

Marine crabs dominate the West Coast, East Coast and Gulf Coasts. They can breathe underwater using gills, and as anyone who has done recreational crabbing, they are scavengers that eat most any bait thrown their way. Absent bait, their diet includes other benthic creatures such as consists of worms, clams, mussels and other invertebrates.

Some of those crabs live near shore a least part of he year and wind up on the beach. The crab pictures and identification tips presented here address these crab species.

Describing crabs always starts with a few basic facts such as they have ten legs with the first set of legs often described as pincers or claws. Marine crabs breathe underwater using gills. Marine crabs are scavengers. Their diet primarily consists of worms, clams, mussels, other crabs, and other invertebrates.

In the East, a family of crabs called swimming crabs get their name because of the presence of a pair of back flippers as legs that help them swim in their near shore environment. The Atlantic Blue Crab, pictured above, the most prominent swimming crab, is also the most commercially popular species. The blue on the claws stand out in many specimens.

Depending on the location along the Atlantic and Gulf Coast shoreline, they also are called the Chesapeake Blue Crab. 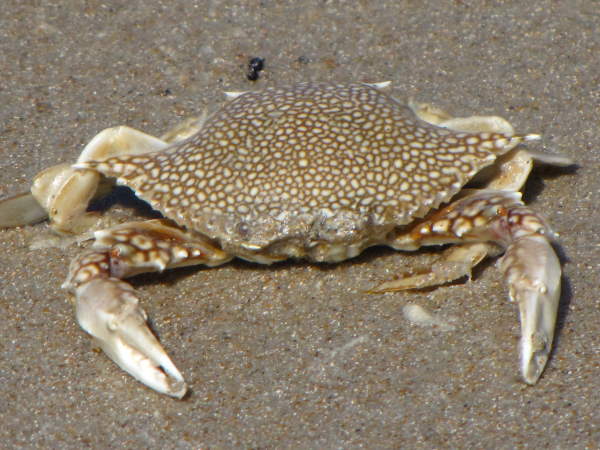 Speckled crabs also live along the Atlantic and Gulf Coasts. They grow smaller than the Blue Crabs and the picture highlights the speckles on the shell. 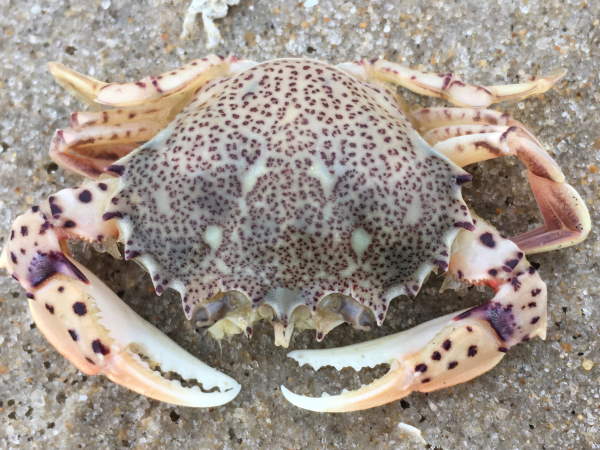 The colorful shell of the Lady Crab outmatches its relative the Speckled Crab. They are medium sized crabs that live near shore along the Atlantic and Gulf coast. 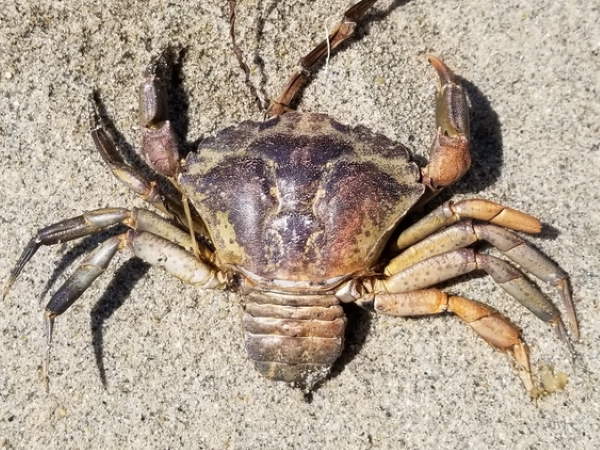 The swimming crab family also includes a species not very welcome on the East Coast, the European green crab (Carcinus maenas). This is a much smaller species native to the other side of the Atlantic pond. The crab is an effective predator, adept at opening bivalve shells, and has been blamed for harming the soft shell clam industry. 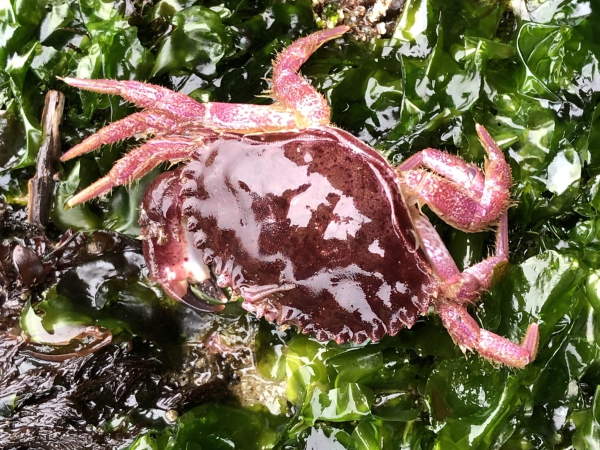 Nothing says crabs on the Coast like the Rock Crabs including the commercial king, the Dungeness Crab.

Even the formal name for Rock crabs (genus Cancer) personifies concept of crab for many people. They tend to grow smaller than the major commercial crabs such as the Atlantic Blue Crab and Pacific Dungeness. However, shell sizes of six inches in length make they commercially viable in many local market.

The common name rock refers to their preferred habitat, rocky shores on both coasts.

They are also hard shelled and the sawtoothed form of the shell as shown in the picture of the Pacific Rock crab, is a good field identification clue. 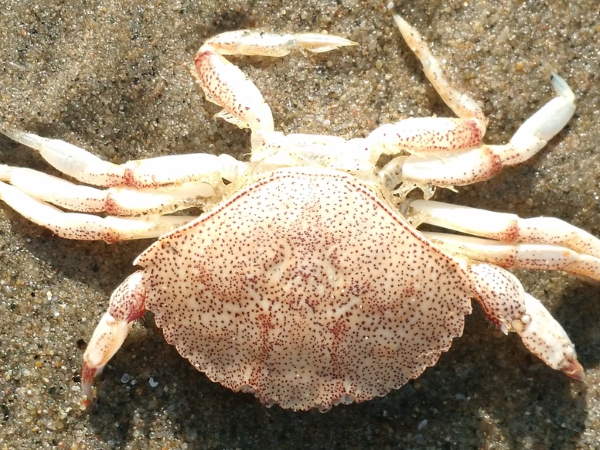 Seafood Watch reports that over the past few decades the Atlantic Rock Crab has been highly over harvested and undermanaged. 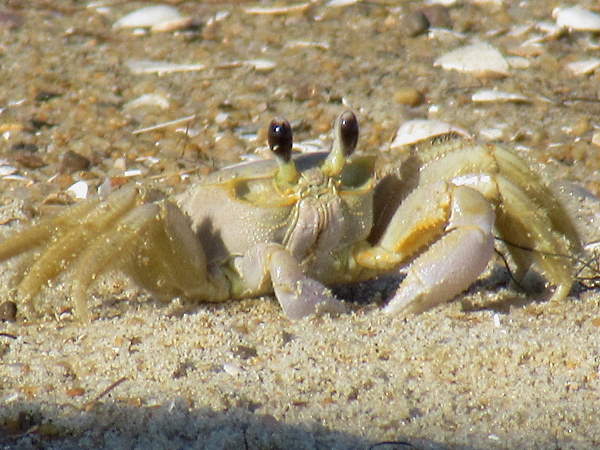 Crab pictures might be incomplete with the fiddler crabs and ghost crabs. SAndy beaches are their preferred habitats, making them highly visible to people on a beach holiday. The Atlantic Ghost Crab represents the genera i the United States. Dark eyes on a small light colored body catch the eye as they scamper above the tide line. 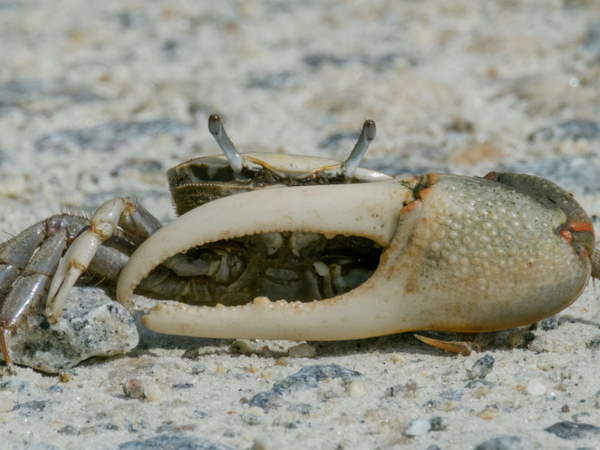 Fourteen different species have been documented along the East and Gulf Costs. species of fiddler crab to be found along the Pacific coast of the USA. In contrast, 14 species are found on the Atlantic and Gulf of Mexico.

The single large claw of the male is the key identification clue. 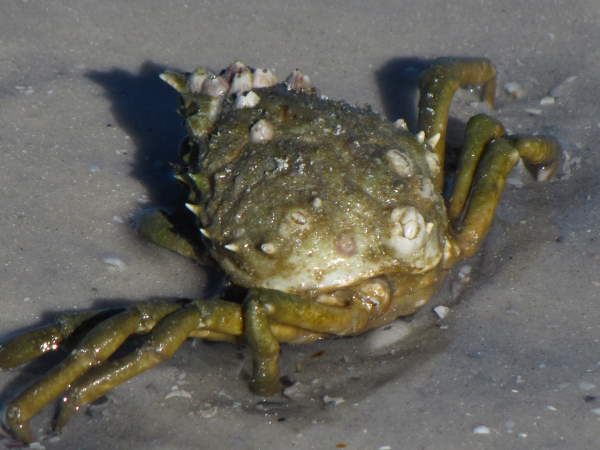 Many areas of the Atlantic Coast host the Common Spider Crab, also called the the Portly Spider Crab. One look at the spikes on the shell makes it very easy to identify. Males can have shells that reach six inches in length. The long legs give it the spider moniker.

Best known of the spider crabs is the monster Japanese spider crab. The legs can exend up to eighteen feet in length. 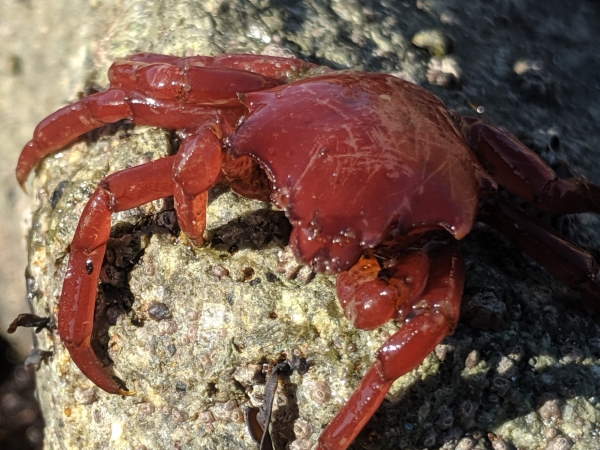 Smaller and less conspicuous members of the family, the Kelp crabs survive on the kelp forests. They can often be found in the intercoastal zones along the Pacific Coast that host kelp forests. They don’t grow very big. Males might have a shell less than four inches in length. Females are smaller. 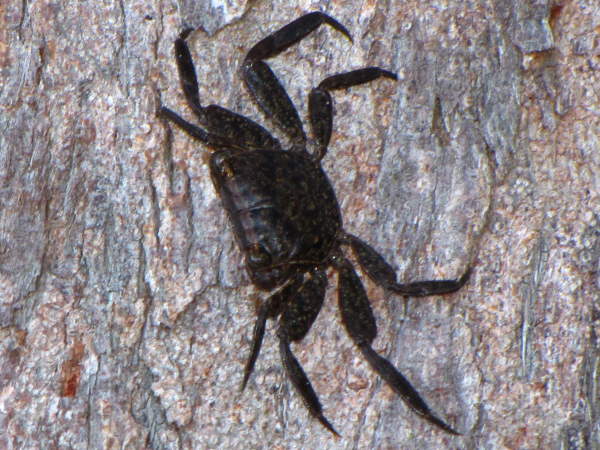 Marsh and Mangrove crabs are small crabs with square bodies that inhabit near shore areas of the East Coast and Gulf Coast.

As the name suggests the Mangrove Tree crab, pictured, limits it habitat to Mangroves of Florida and is the least ranging of the two species. It’s an omnivore that often feeds on Mangrove leaves. As the picture highlights, you can often find it walking on the tree trunk. 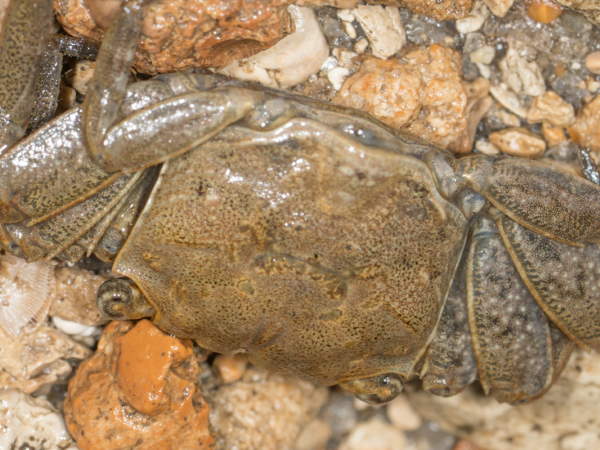 The marsh crabs, also small shelled has, range in color from light brown to olive green. Its small size means it limits its range to shallow waters of bays and marshes along the coast. 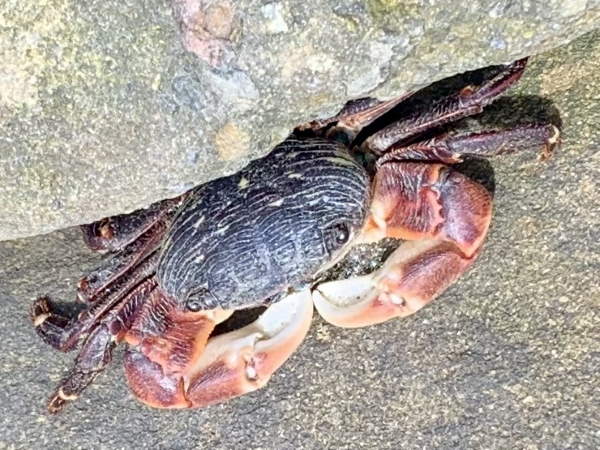 The last of the crab pictures present shore crabs. They are mostly a West Coast group and as the common name suggests, they live along rocky coastal areas. As the picture of the Striped shore crab shows, looking between the corner of two rocks along the beach often produces one. 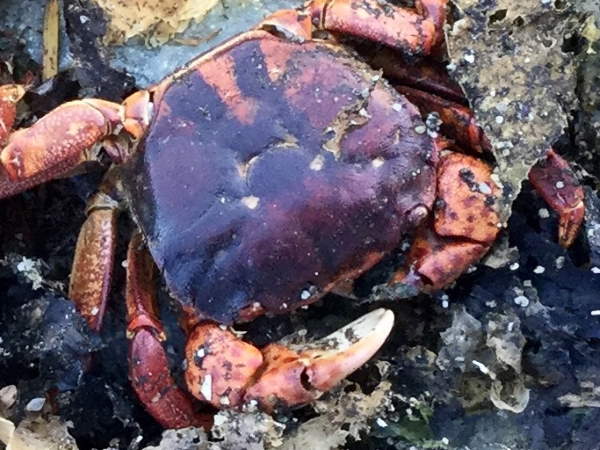