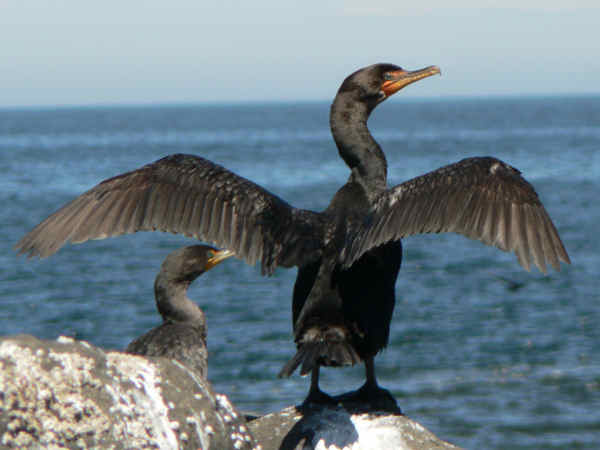 Cormorants (family Phalacrocoracidae) the large, social, fish eating birds, inhabit both fresh and salt water locations across North America. Recent North American taxonomy changes see them, together with three additions families, as constitutive of the order Suliformes. If you’ve seen one, you have most likely seen hundreds or thousands in a colony during breeding season. 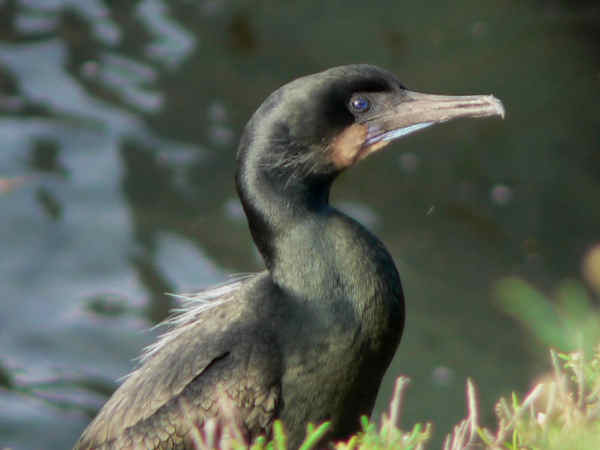 Eye color helps with field identification for some species. Brandt’s Cormorant, for example, have blue eyes and Double-crested Cormorants have green eyes.

The Double-crested Cormorant shown in the top picture spreading his wings in the sun to dry, is habitual for a water bird without water proof wings.

The most widespread native species, their population levels have increased over the past thirty years, to the point of controversy. Some interest groups such as aquaculture farmers and sports fisherman, consider them as their fishing competitors.

The Pelagic Cormorant, along the Brandt’s cormorant, are marine birds, found along western North America to Alaska.

Red-faced cormorants live year round along the southern Alaskan coast and their population is considered stable.

Neotropic cormorants look similar to Double-breasted cormorants and also live in both fresh and salt water environments. They are primarily Central and South American birds that migrate as far north as the Texas Gulf Coast and southern Arizona during breeding season. Their population levels are also considered stable. A changing climate and access to suitable food and shelter might be enough to push their northern breeding territory a bit further north.