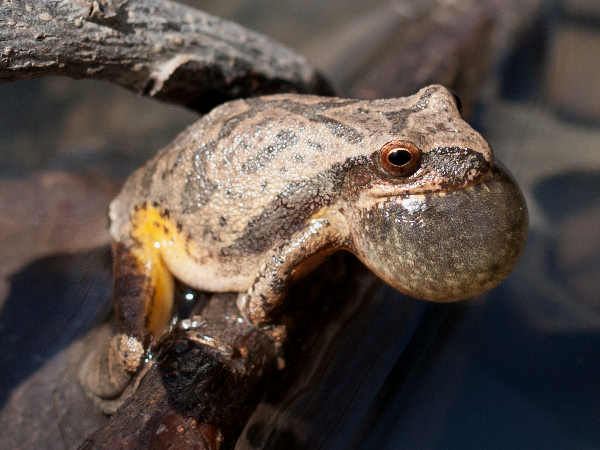 The frog identification series continues with the chorus frogs. As a matter of introduction, any group of frogs croaking together gets the common name chorus frogs. The more formal group of chorus frogs belong to the treefrog family Hylidae and the genera Pseudacris.

Research entitled Phylogenetic relationships of the North American chorus frogs (Pseudacris: Hylidae) appeared in the journal Molecular Phylogenetics and Evolution 30 (2004) 409–420 to describe and explain chorus frog classification based on DNA studies. They concluded:

Since then research continues on the proper classification of chorus frogs. Much of it focuses on questions pertaining to which one ought to be species or subspecies.

The Society for the Study of Amphibians and Reptiles released a 2017 circular that currently documents eighteen species of chorus frogs in the United States. Boy oh boy can they sing up a storm as they males gather in common wetlands areas during the breeding season. The large number of species also indicates regionalism. For example, the New Jersey Chorus Frog, not presented here, has a range limited to Southeastern Pennsylvania, New Jersey, and the Delmarva Peninsula of eastern Maryland, Delaware, and Virginia.

This part of the frog identification guide covers many chorus frog species that are found in all areas of the United States. It deals mostly in picture identification. Each of the species also has a distinct song, and knowing the song is also a great way to get to know the neighborhood chorus frogs.

Some species such as Spring Peepers (Pseudacris crucifer) are easy to identify. X marks the identification for Spring Peepers. They are one of the more common chorus frog species with a range that extends across most of the Midwest and East. 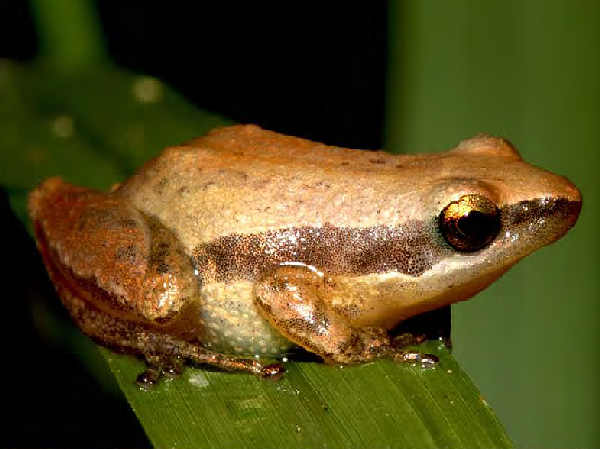 Three cheers for the Little Grass Frog (Pseudacris ocularis), officially the smallest frog in the United States. It’s about one-half inch in length and has a dark stripe from the nose down the side of the body. It ranges from coastal areas of Virginia south to Florida. 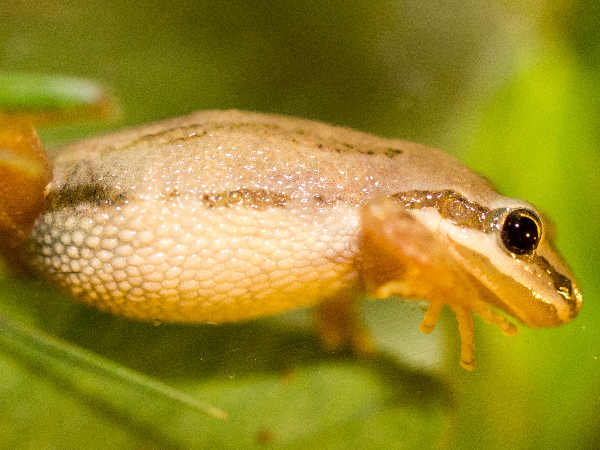 The Illinois Chorus Frog is a nice looking gray or dark bodied spotted species with a range along the sandy shores of the Illinoi River and Mississippi River. Habitat destruction has led to calls for them to be placed on the Endangered Species list. 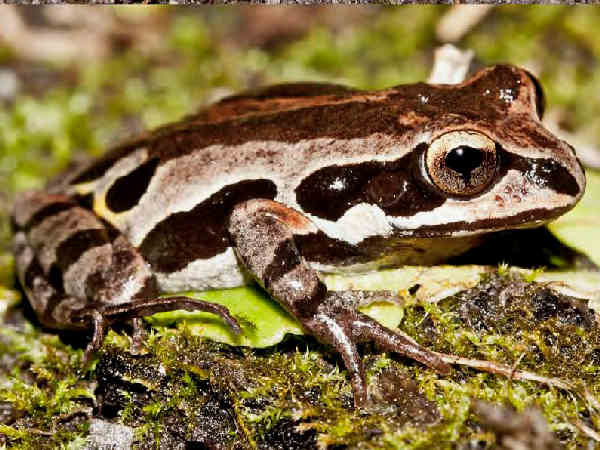 Ornate Chorus Frog (Pseudacris ornata). Description: Ornate Chorus Frogs are small frogs 1 – 1.5 in (2.5-3.2 cm) with small round toe tips. They are among the most colorful of the frogs in our region and come in gray, green, and reddish-brown color phases. They have a black mask-like stripe across their eye, distinguishing them from other small frogs in our region, and additional dark markings on their sides and groin. This species can also have yellow on the groin along with small yellow spots on the insides of their legs. 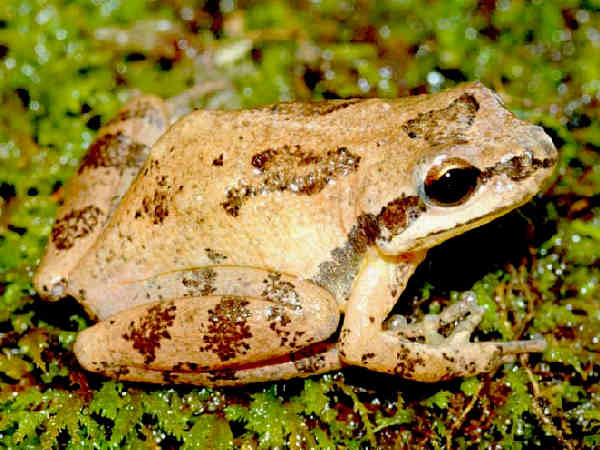 Upland Chorus Frogs (Pseudacris feriarum) have a stripe across the eye. They are fairly common with a range from Pennsylvania down the Appalachian Mountains and in areas of the Midwest and Texas.

The Western Chorus Frog (seudacris triseriata) might have a bit misleading name. It’s range extends around the great Lakes and a bit south. Look for three stripes down the back as a good identification clue. 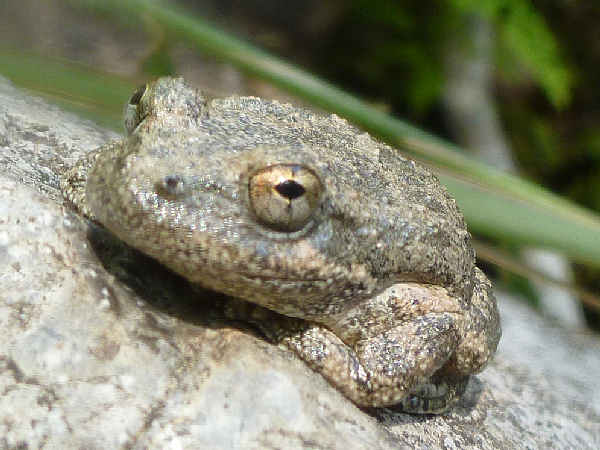 An entirely different group of chorus frogs are found in the Rocky Mountains and the West Coast states. Like many of the chorus frog species, their body color changes depending on their habitat. Geography is often the best way to identify them.

The California Tree Frog is found in coastal areas in Southern California. 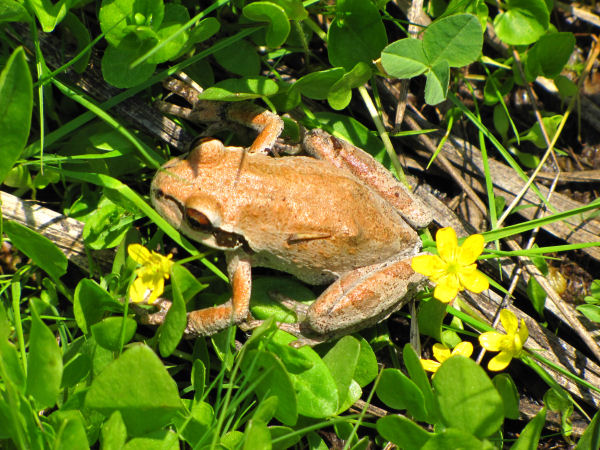 The Pacific Tree Frog (Pseudacris regilla) lives in ponds and other small watering holes throughout the Pacific Northwest. Sometimes called the Pacific Chorus Frog, they can really croak up a symphony of sound during the night hours.

Much like the chameleon, Pacific Tree Frogs adopt a variety of colors depending on environmental factors such as background light. It’s not unusual to see their skin change from green to brown to rust, and any combination, in a matter of hours.

Change in color need not make this frog identification task difficult. They tend to be the only tree frog in thiei territory. In 2007, Washington State designated the Pacific chorus frog its official state amphibian. 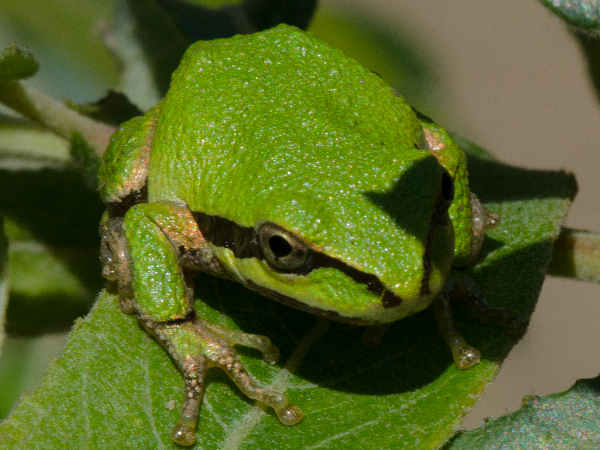 The Sierran Treefrog or Sierran Chorus Frog (Pseudacris sierra) is another of the more common western species. It is habitat adaptable and can be found in mountains, fields and forest in most areas of the west from Idaho to Central California. In the Washington and Western Oregon Pacific Northwest, it is replaced by the Pacific Chorus frog.

Like most species, physical characteristics are not much help in identification because individuals tend to be chameleon like and adapt their skin color to match their environment.

Here’s a list rounding out the remainder of the Chrous Frogs in the United States. Like the ones already mentioned the frog identification task begins by noting their small size and loud voices.